Have you done some one-finger push-ups yet? You’d better, because that index finger needs to turn mush into muscle! It’s time for barre chords, and where there are barre chords there are sore fingers. Fortunately, you only have to learn one figure to play 12 minor chords.

In our previous blog posts we wrote about basic theory about major barre chords and barre chords you can play with one chord shape and so read that to put what’s coming into context. All you need are three basic finger positions to play 24 chords. Easy, simple and to the point. That’s how we roll. 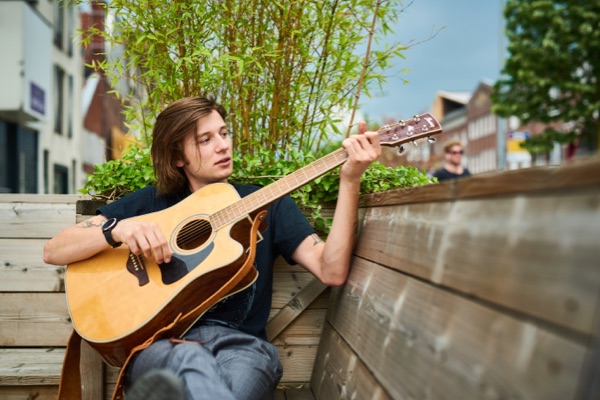 The secret of the Em chord

In part one of this series we explain how you can play any major chord you want using the basic shape of the E chord. All you have to do is make your index finger so strong that it can function as a replacement for the nut at the top of the guitar neck. What you need to know after that is which notes belong to which frets. We have made a tool for this, as you can see below.

The focus of this article is on minor chords with a root note on the low E string. The principle is the same as we have previously seen with the major chords. First step: take an Em chord and strum it. Make sure you use the following positioning of your fingers: ring finger on the second fret A string and pinky on the second fret D string. This leaves plenty of room to apply force with your index finger, which lays flat on the first fret when you go to the Fm chord.

We already said it, but now slide your Em chord figure up one fret and compensate for the guitar nut by putting your index finger flat on the first fret. Yes, press all the strings as hard as you can with that flat index finger. It’s not a pleasant feeling, but remember the words of Muhammed Ali when someone asked him how many crunches he does: “I start counting when it hurts”.

Now look closely at the schematic representation of the guitar neck that we previously mentioned. If you combine this with the chord figure as shown above, you can make minor chords over the entire fretboard as long as the root note is on the low E. So what are you waiting for, try it out! Let’s hear an Am chord, followed by a Cm chord, a Bm chord, and finish it of with a F#m chord. 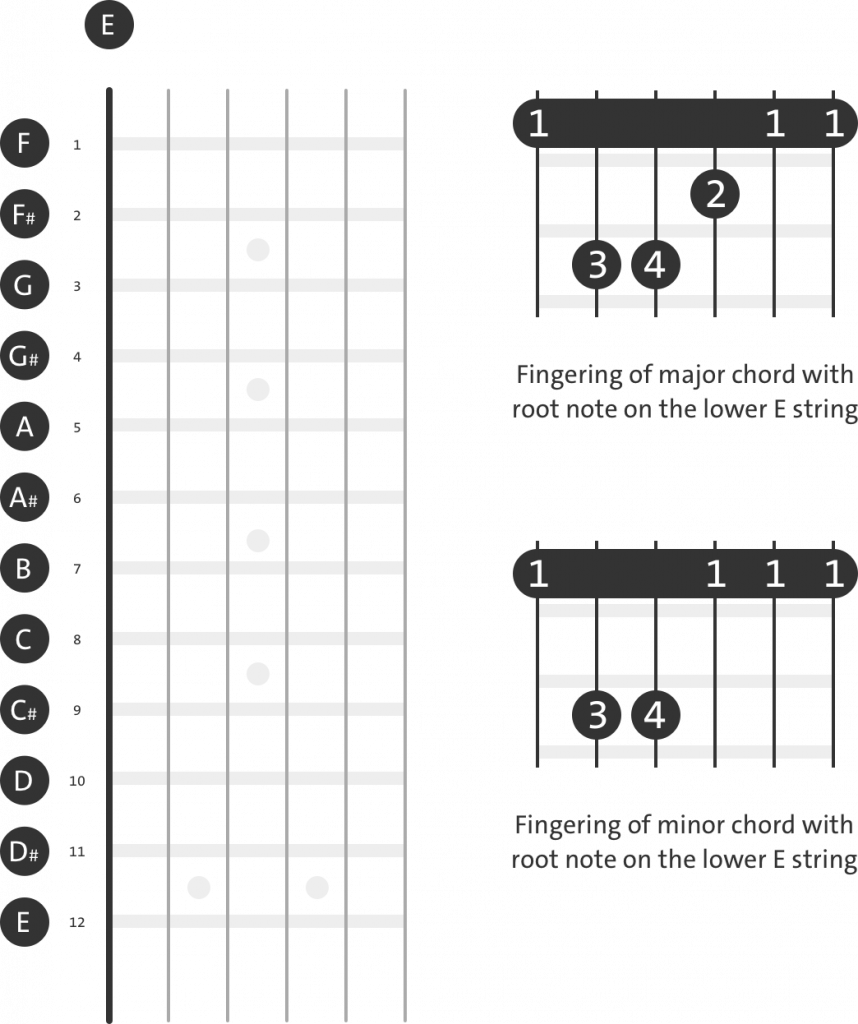 Practice ‘till you’re fingers fall off

Sounds a little too good to be true, doesn’t it? Well, in this case it’s just true, so get used to it. The most important thing is that you put this basic knowledge into practice. But what does that mean in concrete terms?

Grab your guitar and learn by heart which tone belongs to which fret on the low E string. This knowledge will really save you a lot of discomfort. It is also important to strengthen your grip. Of course there are shortcuts for that – one finger push-ups for example. But which one is the best? Well, if you ask us it’s just matter of playing lots and lots of barre chords. Easy peasy, right?

Okay, we understand that you have get motivated. That’s why we’ve selected a few songs to get you started. Think of it as homework on which you have to spend at least three minutes every day. Do you have your guitar at hand? Nice!

First play along with I Hope You Dance van Lee Ann Womack. Remember: it’s not about whether this song is your cup of tea, but about the physical training. And while you’re at it, try Thank U, Next van Ariana Grande and Basket Case van Green Day and Paint It, Black van The Rolling Stones and Soul to Squeeze van de Red Hot Chili Peppers and… here’s an extra challenge you can apply on the tracks we just recommended, or on any other songs you like: play all the basic chords as barre chords. Now go get ‘m rock star. Happy jamming!