One of the most dramatic chords you can grab at the top of your neck is the Am. The scale of this chord of the week consists of the basic notes A, B, C, D, E, F and G. That’s why there are countless rock classics written with the Am at the core. 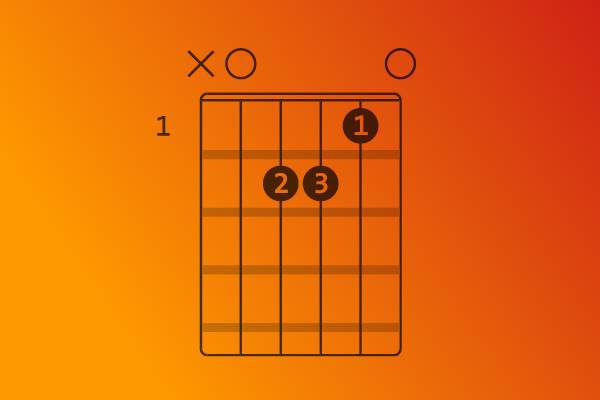 Our chord of the week is made up of the same tones as the A major, with the main difference that the third tone – the third – is not a C# but a C. The above tones that appear in the Am scale, therefore, fit as stand-alone chords in combination with the Am. Just look at the tracks below.

“Stairway to Heaven” is a rock classic and a welcome addition to any setlist. Jimi Page’s powerhouse display of technical skills might overshadow the core of the song: the chords. But, when you look past the spicy fingerpicking and listen to the soul of the track, you’ll soon notice that it consists of basic triads played at the top of the neck. https://youtu.be/D9ioyEvdggk Which is why “Stairway to Heaven” is actually a good song for a beginning guitarist. It comprises several standard chords, like Am, C, D, E, F, and G. Give it a try. If it’s easy, you can go and see how the plucking fits in there.

While true for “Stairway to Heaven”, not everything written in the Am sounds serious and gloomy. Take “Le Freak“, the song from the legendary funk band Chic, led by hitmaker Nile Rodgers. It doesn’t get more buoyant than this. The track has everything, from frisky vocals to groovy bass lines and well-timed guitar punches. https://youtu.be/h1qQ1SKNlgY As you might expect this song is not very difficult as far as the chord scheme is concerned. The most important funk riff revolves around the Am, D, C progression. The only thing you have to pay close attention to is your strumming hand. It doesn’t take long to play the chords, but to ‘feel the funk’: that’s a steep learning curve.

If you include Led Zeppelin’s “Stairway to Heaven” in your jam, another classic that shouldn’t be omitted is the epic “Child in Time” by rock band Deep Purple. It’s a mesmerizing gem from the seventies. Let’s take a closer look at the song. We’ll see straight away that one thing stands out. https://youtu.be/OorZcOzNcgE It’s not Richie Blackmore’s versatile guitar part that makes this epic ballad feel so elusive. This can be attributed to frontman Ian Gillan’s towering range and Sir Jon Lord’s illuster organ part, which envelope the basic chords of the song: Am, G, and F.

“Bad Romance” by Lady Gaga is not old enough to be a golden oldie, but it’s sure to be a classic in the long run. And of course, we don’t want to bore you with only seventies classics. “Bad Romance” will restore the balance. https://youtu.be/qrO4YZeyl0I Obviously, this track is electronic, but you can tame the electric bleeps and turn this song into a sultry campfire hit, by applying a standard strum to the basic chords Am, F, G, E and C. Well, that’s pop music for you of course. Everything is possible with a limited number of chords. That doesn’t make it any less fun to play though. Happy jamming!