Capo as a musicians tool

Have you ever played a song that consists of only barre chords? And has three or four very slow verses. It can be quite painful for your left hand, right? That’s where the capo comes to the rescue! 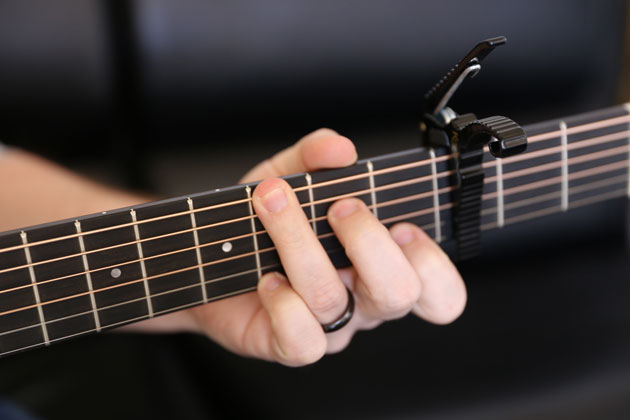 What is a capo?

Capo is short for the Italian word capotasto, which means nut. A capo is a device that musicians use for fretted stringed instruments to shorten the playable length of the fretboard. Why would they do that? Well, to be able to play the chords in a more “open” way, avoiding barre chord positions. By making a string shorter, we’re increasing the pitch of that string, making the sound higher.

We’ll see in more detail how capo works in a moment. First, let’s talk about the main parts of a capo. There are many different versions, but the main components of a capo are a plastic or rubber coated plate that presses the strings and a mechanism that fixes this plate to the instrument’s neck.

How does a capo work?

A capo raises the pitch of the strings and allows musicians to use the open chord shapes for different keys. Let’s look at an example. You’re struggling with F# chord. As you can see, an F# is a barre chord.

Now just imagine that instead of pressing down on all strings with our index finger, you’ll put a capo across all strings on the second fret. Now you don’t have to press those strings anymore. Take a look at the rest of the F# chord: the second, third, and fourth finger. Do they remind you of anything? Yes, it’s the shape of an E major open chord, but moved to the third fret.

It’s important to mention that by fixing the capo across the second fret, we raised the pitch of the strings.

Remember that for open strings we have the following notes (from the thickest string to thinnest): E, A, D, G, B, E. By putting the capo on the second fret, we’re raising the pitch of all strings a whole tone, which gives us: F#, B, E, A, C#, F#.

Applying the capo to a song

Let’s say you’re going to play the famous “Johnny B Goode.” This song consists of three chords: Bb, Eb, and F. All these chords can be played as barre chords. If you don’t know one of these chords, or you simply want to avoid playing barre chords, the capo provides a solution.

Now take a look at the chords again: Bb, Eb, F. How much do we need to increase or decrease these chords to get chord shapes we’re familiar with? What about a semitone down? So, Bb will become A, Eb becomes D, and F becomes E. All these “new” chords — A, D and E — we know very well, right?! They are open chords.

In order to decrease the pitch of these chords by one semitone, in other words moving these chords one fret down towards the nut, we need to increase the pitch of our strings by one semitone (one fret up). And now you know that you can do that by fixing the capo on the first fret. Now, just simply play the open chords A, D, E and you’re ready to rock.

Do you know that Chordify Premium comes with a Capo Feature? You can try it at the Premium Demo Channel.

Let’s look at our example again: “Johnny B. Goode” by Chuck Berry [link to artist page]. It consists of the chords: Bb, Eb, F.

As you can see, the chord shapes have changed into the basic A, D, E (open chords). Remember that the capo on the first fret acts as the nut of your guitar now. That means that the second fret is your first fret, and that everything has moved up a semitone. Therefore, when you play an A chord shape, you get the sound of a Bb; the D chord shape gives you the Eb; and the E chord shape giving you an F.

This is an example of how you can use the Capo Premium feature to replace chords by chord shapes that you’re familiar with.