With their new record “She Says” freshly released and the festival season starting, we were wondering what our Gurr friends are up to this summer. So we contacted Andreya Casablanca (A) and Laura Lee (L).

Gurr are no strangers to Chordify. The band preformed at our Gado Gado-party during Eurosonic, were featured as the soundtrack to our Music & Tech Hide-Out after movie and once even pointed out that our algorithm isn’t as bad ass as we pretend it to be. Talking about tough stuff… 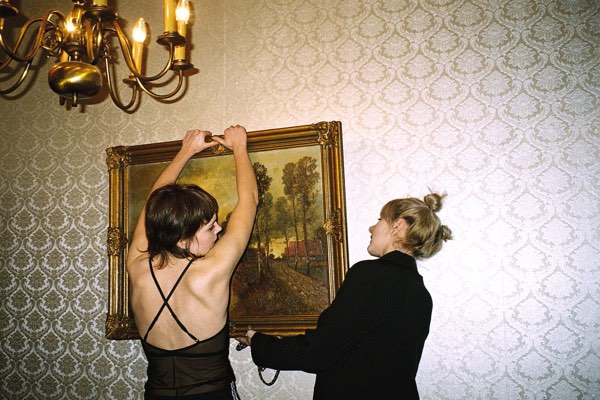 You guys are really busy this time of the year. What does your tour schedule look like in the festival season?

A: We are playing festivals in Germany, Switzerland, Hungary, England and the US! I’m really looking forward to play Truck Festival in the UK and Southside Festival in Germany, as the latter one is one that I frequently went to myself as a teenager.

What are your favorite festivals to play at?

A: I actually really like the festivals that I personally would also go to, where the line up is maybe already my dream line up and I can watch other bands before or after :) That’s a dream situation — a lot of times you are just busy with getting your own shit done.

L: There’s a lot of cool smaller festivals in Germany with a great line-up: Maifeld Derby, Immergut, and Haldern Pop are among my favorites.

I saw your blogs on gurrband.com. You wrote some really raw stuff there about having a hard time after your first album “In My Head”. So the legends about the DSAS (Difficult Second Album Syndrome) are real?

A: I think it’s mostly the pressure to be putting out something else after your first album had made a splash. You can definitely drive yourself crazy, which is very hard for me to turn off. Especially when you compromise a lot, you lose yourself in what you actually really like yourself, and that’s something I’ll definitely take with me when writing the next record.

When people think of being a rockstar, touring around, and playing in front of big crowds, everybody’s like: ‘Wow, that’s living the dream!’ But is it and what is the price you have to pay for living this rock ’n roll kind of life?

A: You still have to pay rent even though you don’t live in your room anymore haha. At least for me — as I am renting out a room in a WG — it’s very hard to create a home really, because I feel like I am constantly on the move anyway, so I refuse to settle in too much, which can also work against me when coming back from tour. It’s really hard not to lose yourself, which is something I often struggle with, on or off tour.

L: You also need to get used to not seeing your friends and loved ones that often. Right now we’re on the road playing festivals most weekends — which is when most of my friends are off from work. So I’m trying to either invite them to come with us or squeeze some quality time in in-between tours.

So let’s get on a lighter note. Do you still have your first instrument?

Andreya: I do! It’s a basic recorder made out of wood and I started playing it in first grade, as everyone else, but switched to flute later. I enjoy both instruments and it’s sad I thought for a really long time in my late teens these instruments are embarrassing. I love their sound.

Detroit Rock City!!!! Today we are driving to Chicago what can we say our faces are in awe seeing the beauty that is American socio-economic history and its reflection in urban areas all across —— a little rumble from hangover city. 📸 @randomlightvideos

L: My first drumset is also still in our practice room. I bought it when I was 14 and got money for my „confirmation“ … it’s funny because that drum set has been traveling with us for seven years now, our live drummers are also still playing on it. But I think it’s time to say goodbye to it soon… the bass drum is completely wrecked from us jumping on it all the time.

How important is the gear you’re playing on?

A: Pretty important! A shitty sound can drag your mood down entirely. It’s always hard to match 100% what you have in your head. As for me, my Gibson / Vox pairing is the crisp Garage/retro sound that I like, but when it comes to rhythmic parts it can get a little wishy-washy, which I am trying to figure out right now.

L: Expensive gear does not necessarily translate to a better sound, I think. I started out playing with an Epiphone ES-339 and a Fender Super Champ. I just looked at the gear my favorite guitarists were using (at that time it was Daniel Kessler from Interpol and Peter Hayes from BRMC) and then looked for something similar in my price range.

I’ve upgraded to a Gibson ES-339 since and also started playing an American Performer Fender Jazzmaster – both of these guitars are pretty different but cover the range for Gurr quite well: from psychedelic-wavy lead-guitar riffs to more Garagey rhythm guitar sounds.

Do you have a gear wishlist?

A: I would love to try so many of these experimental Earthquaker pedals that imitate synths. I love weird sounds!! And I wish I could try out more pedals to shape the sound, but then also reduce the pedals again. I like having a good set of three or four and then being able to achieve all kinds of sounds you need. I like knowing how every setting works with different settings on my amp and guitar, because there are so many possibilities.

L: I really want a Fender Twin Reverb amp but they are just so heavy. As soon as I don’t have to carry my own amp to shows anymore, I will get it haha… I also would love to try out the Earthquaker Rainbow Machine but haven’t quite brought myself yet to pay the price. So far I’m only using an analog delay but I think another digital one would be quite fun for some songs too. Also just MORE and different distortion pedals…

What are favorite chords you like to fall back on when writing a song?

A: It’s terrible but my vocal range really fits to A so there was a time I caught myself starting to write songs on A, but now I’m trying hard not to. I like when major chords abruptly swift to a minor tone but catch themselves again, which is something we’ve done a little bit on “She Says“.

L: I’ve been trying to play with weird or open tunings a bit, as you can hear on our new song „Hush“. Also I really love the songwriter Meg Duffy from Hand Habits and how they don’t always play chords but sometimes just strums certain strings which is something I used for „Fake News“. I think in general I’m not such a „chord“ songwriter and rather work with just strumming certain strings. That’s also how „Walnuts“ and „#1985“ evolved.

How was it like to meet Dave Grohl in the backstage of Rock Im Park?

L: INSANE. It couldn’t have gone any better. He was so nice and down to earth and very easy to chat to. I also wrote down the whole story on our online Zine so I WILL NEVER FORGET that special day in my life haha. Check out the blogpost I wrote about it.

One of your goals was to meet Liam Gallagher. Well, did you already?

L: Unfortunately not, but following him on Twitter already gives my the feeling of knowing him.

How does it feel to be a rockstar and a fangirl at the same time?

A: I believe if I met my musical heroes I would just want to be friends with them so I’d try to keep it lowkey with my fangirling but then later drop how they were really influential to me, like Karen O or Alison Mosshart.

Do you have any advice for beginning musicians?

Andreya: Just do it, and keep on writing, every writing leads to better writing and different writing and sometimes things you wrote first and fast are the best.

Now everybody reading this will be like: “Wow, where can I see this awesome band?!” What is your answer to those about to rock?

A + L: If you’re in the neighborhood come check us out! Here’re some tour dates for ya.