Remember what we said about flattening and sharpening chords? Yup, it’s all a matter of how you look at a note. In this case, our chord of the week is an A#, also known as a Bb. The name doesn’t change the sound, so lets cut to the chase. Here are some cool tracks written in Bb. 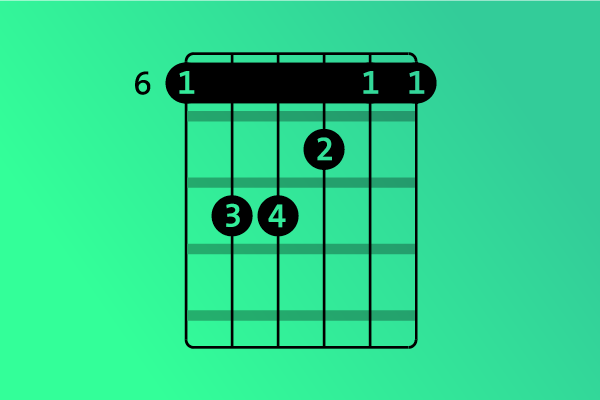 Don’t let difficult chord names confuse you. Just look at the finger settings on the guitar neck. The Bb is a flattened B so that’s practically the same barre figure, only played a semitone lower. The notes in the Bb scale, that make up this chord, are Bb, C, D, Eb, F, G, and A. So expect these chords to frequently show up in the songs that revolve around the Bb.

Stevie Nicks left Fleetwood Mac, once one of the biggest bands in the world, in 1977 for personal reasons. The song “Landslide” appeared on the album Fleetwood Mac (1975), but Nicks incorporated the track in her live set and performed it over the course of her solo career.

The way Stevie Nicks performs the song is a lot slower than the original. The track is written in Bb and most of the time the composition varies between three chords: Eb, Bb, and Cm. When the chorus arrives the triads Gm and F are added. You can choose to just stum the chords, but as you become more advanced, you can try to tinker with them.

“Porcelain” by the British producer Moby is a classic from the nineties house scene. Fun fact: the producer’s great-great-great-grand-uncle is the author of the 1851 novel “Moby-Dick,” hence the reference in his artist’s name. Due to the electronic nature of the track, this song is more suitable for piano and keyboard than for guitar. Although you can, of course, throw it in a jam to see if there are real connoisseurs in the audience.

The first part of the song centers on the chords Bb and Fm. The second half falls back into the pure basics Am, Em, C, and D. After the bridge Moby repeats the first part of the track. Try jamming along and see how far you can get. If it’s too difficult, use the loop tool to practice a certain part several times in a row.

There it is, then, one of the most famous songs in the history of pop music. Did you know that “Bohemian Rhapsody” by Queen is the first music video ever made? Queen couldn’t appear on “Top of the Pops” to promote their track on television so they shot a video instead.

This song is also more suitable for piano than guitar. The track is full of seventh chords, minor chords, and an occasional major chord. The triads follow each other in rapid succession. It is, therefore, a matter of staying calm and going through the song part by part. The most important thing is, of course, to keep practicing. Nothing is as difficult as it seems.

It’s Gonna Be Me – NSYNC

And now that we’re on the subject of pop classics. “It’s Gonna Be Me” by boy band *NSYNC now belongs to the category of pop relics. Even if it’s only because the group was the kick off for pop star Justin Timberlake’s career.

This song fits into any cheerful jam. It has a good sounding progression which is more challenging then you would think. This is due to the fast pace at which the chords alternate. This also makes it a good opportunity to check how good your skills really are. For the beginner, this track is a good challenge to pick up the pace. Enjoy and happy jamming!