Let’s talk basics, shall we? The C major chord is one of the most fundamental and popular triads on piano, guitar and ukulele. In this article we’ll show you different ways of playing a C major chord on these three instruments. To top it off we’ll also explain the music theory behind the triad, so you’ll understand why it’s worth your while to master this chord.

The C major chord consists of three notes: C, E and G. In other words: These notes together are cool enough to create an amazing sound that has shaped many, many songs. The big question is, why? When you’ve finished reading this blog post, you’ll know.

But before you read any further, here are some tips about the nature of this article. For starters, treat it as a manual that not only tells you how to play a C chord but also helps you understand why there are so many ways to use the three notes that make up this chord.

Secondly, choose the instrument you want to learn more about. We’ll get to the bottom of each instrument and talk about the C chord on piano, ukulele and guitar. So, if you’re interested in all of those instruments just read on. But if you’re a ukulele player with no interest in piano or guitar, feel free to scroll down to the instrument of your liking.

In the final part of this blog post we are going to enter the music theory universe. That’s where the “why” we mentioned earlier is explained. It doesn’t matter what kind of instrument you play or prefer, this section contains an explanation of the universal theory that brings all instruments together. Are you ready for the ride? Let’s dive in.

When playing any instrument, it’s always a good idea to start by learning the C chord; but that’s especially the case when your instrument is the piano. Everything revolves around the C when you play the keys — in another blog post on the matter we explain why the C chord is so important for this instrument.

In short, the tuning of a piano uses the key of C as a central point of orientation — like the key of E on the guitar. When you sit at the piano, the middle C key is in front of you. The chord diagrams below show different C chord positions on piano for this middle C, but of course you can play these chord figures in many different octaves. You get the drill. Without further ado, here are three ways to play a C chord on piano.

All three chord shapes consist of the same notes — C, E, G — but, as you can see, their arrangement is different each time. This trick is called inversion, and it’s very useful to know. Curious about how these inversions work? Just scroll down to the music theory part or take a look at our other articles on how chord inversions work.

Well hello, you mighty ukulele player. And welcome to the game. The instrument you play may be small, but its impact is pretty big. That’s why you should learn to take full advantage of the fretboard; playing the C chord on a ukulele is a great way to get started. Yeah, we know, the root position of the C is quite easy, as you can see on the first diagram below. But there are other ways to play the C chord on ukulele.

“Why would I want to learn those?” you might ask. Well, for starters, it’s good to have more options. When you play a song around the seventh fret, it’s easier to grab a C chord there than to move all the way down to the third fret. Another advantage is that, by learning the inversions of the C chord on ukulele, you can diversify your sound when a song turns out to use a lot of the same chords. 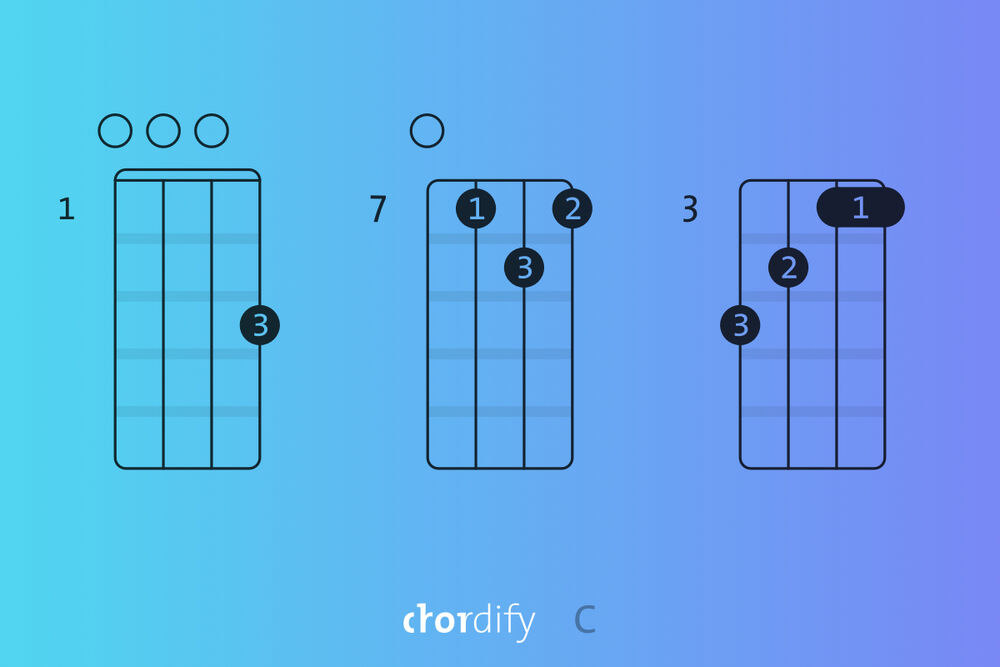 Now let’s take a look at the guitar’s fretboard. The chord diagrams below show a few different ways to play the C chord on guitar. This trick can come in handy when you don’t want to jump up and down the guitar neck. If you know the notes of a chord, you can always locate them in the vicinity of where the most action is taking place on the fretboard for any given song. Let’s say you’re jamming with a lot of open chords; in that case, the first chord diagram (in the image below) will be the easiest to use, since it’s the open C chord.

How to play a C chord on guitar: 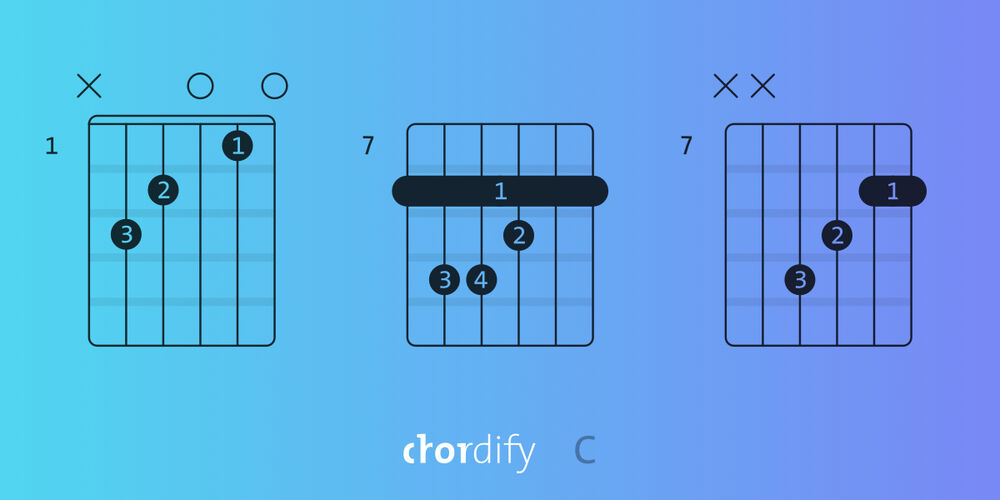 The C chord is a key component of many songs. That’s why it’s one of the first chords you learn when you start playing an instrument. The C major triad is the main chord of the C major scale. This is a very easy scale to play on a piano. It consists of all the white keys starting from C and ending with the C that is one octave up or down.

Let’s take a closer look at the C major scale: C (root), D, E (third), F, G (fifth), A, B. The notes C, E and G sound familiar; maybe because they are exactly the notes we play in our C chord. In other words, they form the foundation for this chord, a kind of skeleton. Let’s remember this order for now.

So, you already learned three different chord shapes of the C chord for ukulele, piano and guitar. But if you really want to strengthen your chord skills, we have something else that might be interesting for you. Curious? Read on!

Remember the C major chord skeleton we just mentioned? Right, it contains the C (root), E (third) and G (fifth). This is their exact order of appearance in the scale of C. All chord shapes shown above, respect this order of notes. But what if we tell you, that we also can mix those up?

Let’s put the first note — the C — at the end and see what happens: E, G, C. And after that we try placing the third note of the C major scale in the back; which looks like this: G, C, E. When we put the fifth note — the G — at the end, we return to the initial order. So, the circle is closed!

By now, you have noticed that each combination generates a new chord shape. So, besides the original root position you get two new possibilities for playing a C chord. And all these three shapes are the same chord. Sounds amazing right? Actually, you already saw this re-ordering of notes in the piano chord diagrams above. Where the first chord shown, from left to right, is the root position and the other two are inversions. Simply put, we talk about inversions when the notes of the chord skeleton are ordered differently.

By now you’re probably asking yourself: “Cool, but why do we need to know so many shapes just for one chord?” That’s a very good question. Let’s explain why it’s worth knowing all this. Have you ever had the following experience: You’re playing a song where your fingers are jump up and down the fretboard over and over again because the chords are quite far away from each other. Sounds familiar, right?

And what about the opposite: You are playing one chord with the same shape over and over again. Well, that’s no fun, is it now? Sometimes, you might convince yourself that you’re just not good enough only because you can’t switch between chords fast enough. But guess what … with this neat trick, you don’t have to! Just like you can jazz up that one-chord song by playing around with the order of the notes you play.

Learning the new shapes we just showed you, will enable you to find the closest shape of the C chord when you have to switch chords fast. And when you have to play a C chord over and over again, you can add variation by using inversions. Convinced? We hope so. Overall, knowing inversions is a great addition to your skill set and it will improve your creativity.

Here are some finger-friendly inversions of the C chord on guitar: 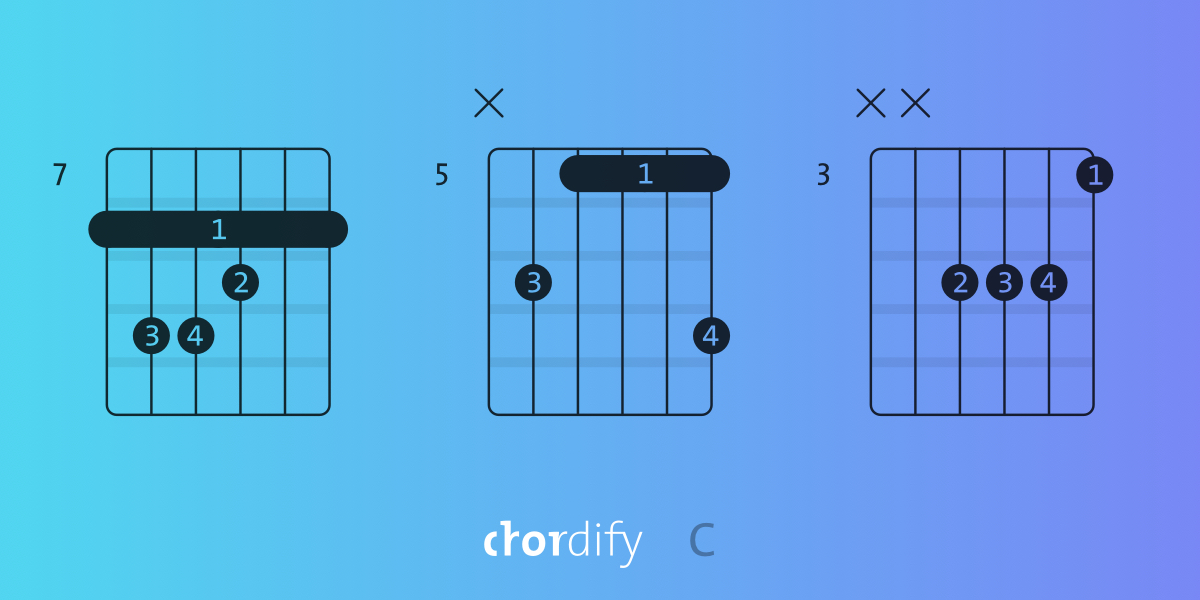 Here are some finger-friendly inversions for the C chord on ukulele: 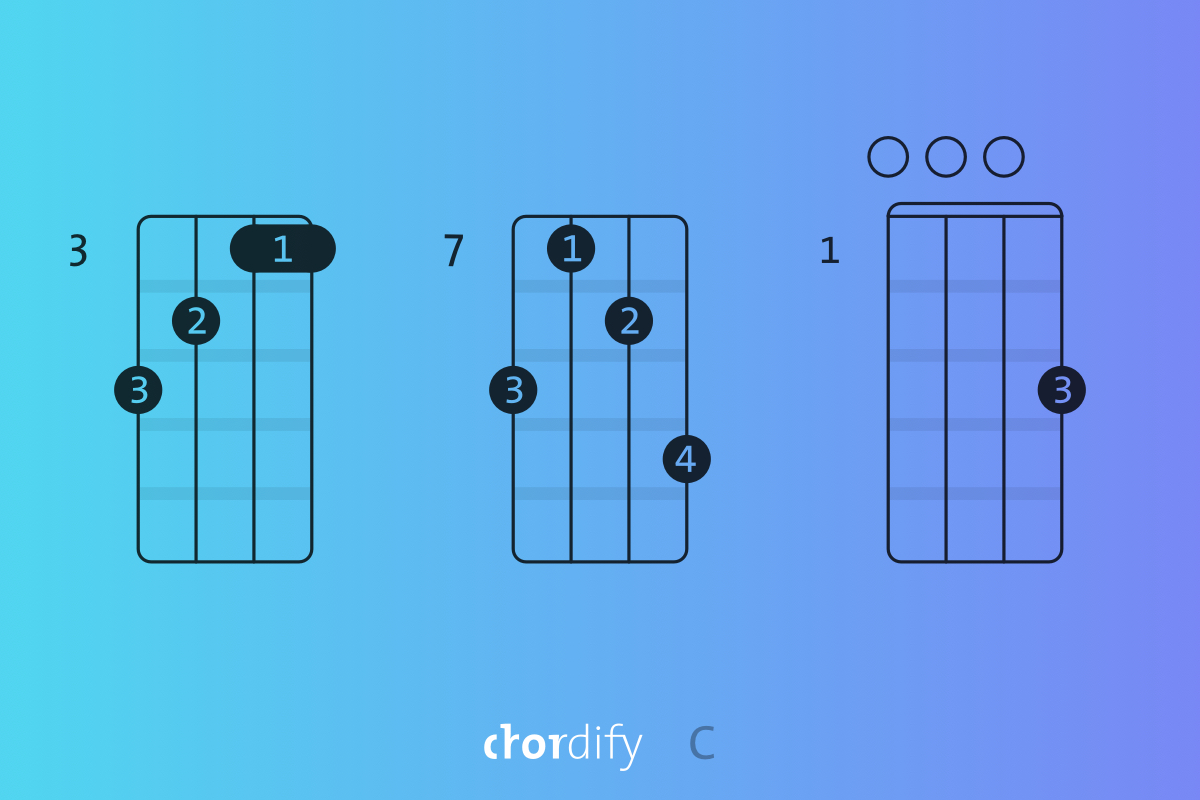 We’ve just learnt many ways of playing a C chord on piano, guitar and ukulele. Now it’s time for you to take your instrument and start applying this knowledge. Don’t forget to use these new skills in songs you already know. Welcome to a whole new world of sound. Happy jamming!