Playing the guitar is an adventure, and much of it depends on choosing the right kind for you. In part 1 of this quest for a good beginner’s guitar, we already discussed how to choose between an acoustic and an electric guitar. In this section we will zoom in on the three most well-known versions of the acoustic six string. 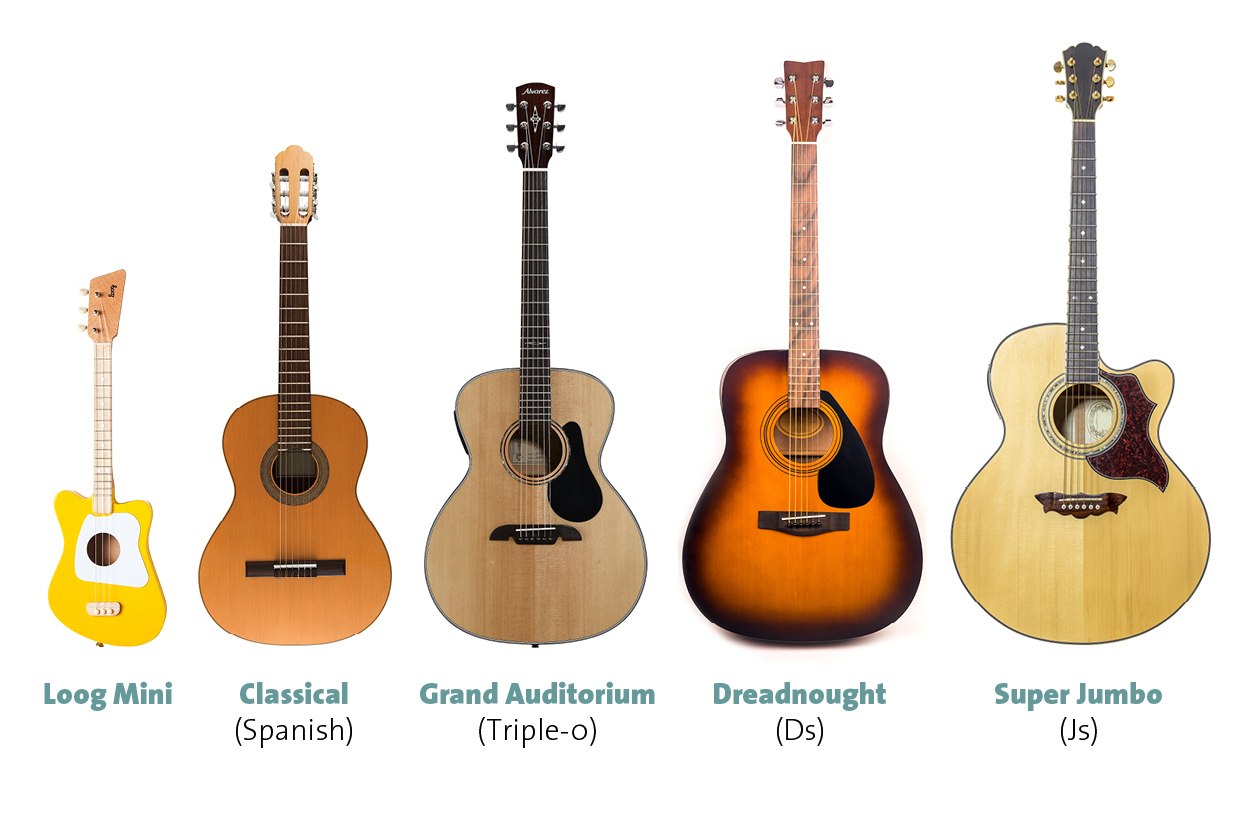 If you like Ed Sheeran, Paco de Lucia and Bon Iver, an acoustic guitar will suit your taste. It has the sound you need to jam on a quiet, a raw or a passionate song. Below we discuss three types of acoustic guitars. This will help you choose your beginner’s instrument even better.

Every instrument has a foundation; something for the creative mind to explore, develop and improve upon. Although the Spanish guitar has its predecessors, we see the classical instrument as the basis for most modern guitars. When we talk about a Spanish guitar, we refer to the model as conceived by Antonio de Torres Jurado (1817-1892).

With his six strings, the nineteenth-century guitarist and luthier has laid the foundation for the contemporary version of the instrument. The Torres model was superior to the guitars that his competitors build, so guitar makers started to copy the Torres design.

The Torres axe is characterized by the beautiful double O curves of the small body. The body is often built of solid spruce or cedar wood. The more firm the wood, the better it resonates with the strings. Additionally, the guitar has a wide neck so the strings are spaced farther apart than on other guitars. This makes the instrument very suitable for finger picking, but less practical for strumming chords.

The rosetta around the sound hole is a reference to the time when the Moors left their mark on Spanish music. The strings of a classical guitar are made of nylon (even the wound strings have a nylon core). This gives the instrument a warm and full sound. Of course, this material did not exist in the nineteenth century. That’s why Torres used strings made from the guts of pigs for his guitars.

Musical styles for the classical guitar

The Spanish guitar is very suitable for classical guitar pieces from the eighteenth and nineteenth century. The work of Johann Sebastian Bach is often played on this instrument, but also contemporary composers such as Britten have written compositions for this guitar. Great guitarists in the classical genre are Andrés Segovia, John Williams, and Julian Bream.

You can play a Spanish jam yourself by first strumming an A-minor chord, and than switching to E-major. From there on, you can slide this position one fret up. Strum the strings and progress another two frets up. This way you turn the E into an F, and the F into a G.

Because of its warm and full sound, the Spanish guitar is very suitable for intimate and more folky songs. Think, for example, of tracks that involve a lot of finger picking, such as the song Fragile by Sting. The width of the neck provides plenty of space to fret the notes, while the nylon strings ensure that the picking and fretting is less slippery (and less painful!) for your fingers.

But what if classical guitar and flamenco are not your thing? Well, then it’s probably better to not buy a Spanish guitar.. For the more mainstream pop and rock songs, the Western guitar is your instrument. It has a larger body, steel strings, and a narrow neck–through which a metal rod runs. The sound is a lot more snappy and bright than that of the classical guitar.

The history of the Western guitar can’t be traced back to one specific builder as easily like with the Spanish guitar. In fact, there are a number of guitar makers who exceeded all expectations in the early days of this instrument. They experimented with the size of the body, the thickness of the strings, and the action of the guitar.

The four most famous models of the Western guitar are the double-0, the triple-0, the dreadnought and the super jumbo. The double-0 is almost an exact copy of the classical guitar when looking at the body alone, but the double-0 has a few small adjustments that are characteristic for the Western design. The neck is narrower, the strings are made of steel, and the body is slightly larger. The double-0 is in no way a Loog, but still the smallest of all Western guitars, and therefore most suitable for children.

To give the sound more power, guitar maker Christian Frederick Martin developed a model with a larger body at the beginning of the twentieth century: the so-called triple-0 guitar. This guitar has a slight convex back so as a result the body is not only larger, but also deeper, which makes the bass tones stand out better.

Due to the increase in volume, the triple-0 is also called a grand auditorium. The grand auditorium is a fine entry guitar and many guitarists find the medium-large model easy to handle. Eric Clapton even has his own signature Martin triple-0, the Martin 00028EC.

C.F. Martin developed the dreadnought for the real bad boys in 1916. This type of guitar was the largest six string you could get on the market at that time. This axe model is named after the then largest warship HMS Dreadnought from 1906. The instrument is characterised by a larger body than the grand auditorium, it has oval square shoulders, and a neck that is connected to the body at the fourteenth fret.

The dreadnought is perhaps the most widely known Western guitar model. The instrument has a fuller, louder, and bolder sound. This makes it ideal for rock ballads and country. You can easily say that the dreadnought is for the Guns ‘n Roses, Elvis, and Johnny Cash lovers.

In response to Martin’s dreadnought, guitar maker Gibson built an even bigger and more brutal beast. The body of this guitar is so humongous that Gibson just simply named the six string exactly that: the Super Jumbo.

Artists like Bob Dylan, George Harrison, Jimmy Page, and Chris Isaak embrace the super jumbo and its powerful sound. Still, this guitar has never been as big of a hit as the dreadnought. Because of the large body, the instrument is just too much to handle for the average beginner (and average-sized person).

Now I hear you thinking: ‘Pop is cool, rock is okay, classical and flamenco sound great, but I like jazz!’ To get that real jazzy sound–made famous by Jimmy Rosenberg, Django Reinhardt and Fapy Lafertin–you’ll have to look for a special model of guitar. The Selmer guitar–also known as the Gypsy jazz guitar–is a combination of elements found in a Western and a Spanish guitar.

The Selmer model is best known for its D-shaped sound hole, but sometimes an oval-shape (‘petite bouche’) is used instead of the D-shape. The original Selmer guitars date from 1932 to 1952 and were built by the French luthier Selmer and the Italian Mario Maccaferri.

The Gypsy jazz guitar is very similar to its Spanish sibling, in terms of the width of the neck and the distance between the frets. Additionally, we also see several characteristics of the Western guitar, such as the steel strings and the larger body.

The idea behind the D-shaped hole is that allegedly the sound of the strings will project better and any unevenness of the vibrations will be filtered out. The bridge is adjustable, in contrast to the Western and classical guitar bridges; Maccaferri copied this from the mandolin. The strings come together at the top of the neck in a snakehead-shaped headstock.

Rules of thumb for choosing an acoustic guitar

By now, you’ve got a pretty good idea of the different types of acoustic guitars. Brands such as Selmer, Gibson, Torres, and C.F. Martin are–of course–the cream of the crop among the models mentioned. That said, as a beginner you don’t necessarily need an expensive brand; what you do need is a decent guitar that’s easy to play and sounds great as well (to you, at least).

It is therefore important to know which materials make an instrument sound good. For example, the top–that’s the front of the body–is most commonly made out of cedar or spruce wood, as both resonate really well and also have their own distinct sound.

The top can be either solid wood or plywood–obviously more expensive guitars are mostly solid wood, but guitars with plywood tops can still sound great. Don’t be fooled by whatever clever marketing is out there and simply choose a guitar that meets the rules of thumb above, and you’ll have an instrument for life. Happy jamming!