Once upon a time…we received an invitation to present Chordify in Hamburg to King Willem-Alexander and Queen Máxima of the Netherlands. Of course we felt extremely honored and were even more excited! So last week, our very own Tijmen Ruizendaal put on his best suit and brushed up his guitar skills in order to introduce Queen Máxima to Chordify.

The royals were in Hamburg as part of a two-day economic mission to Germany and were received by Joop van den Ende and his wife Janine at the Joop van den Ende Academy – Stage Entertainment headquarters on 20 March 2015. They were introduced to the latest developments in the worlds of acoustics, lighting and sound design from both Germany and The Netherlands. The Dutch are leaders in this domain when it comes to education and Chordify’s appealing mixture of music education, state-of-the-art technology and focus on the creative industries made us a really exciting part of the day, as you can see in the picture below (© Maurice Mikkers). 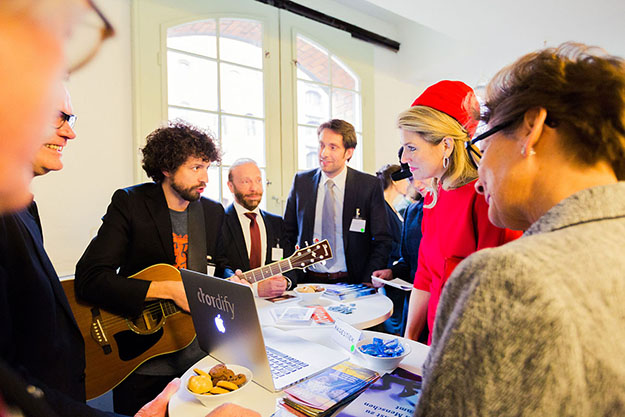 Queen Máxima was enthralled by Tijmen’s explanation of Chordify and his demonstration using the guitar. She was intrigued by how easy it is to use Chordify and even said that she wished that she had had such a tool when she was a teenager. We really hope Máxima will show Chordify to her kids!