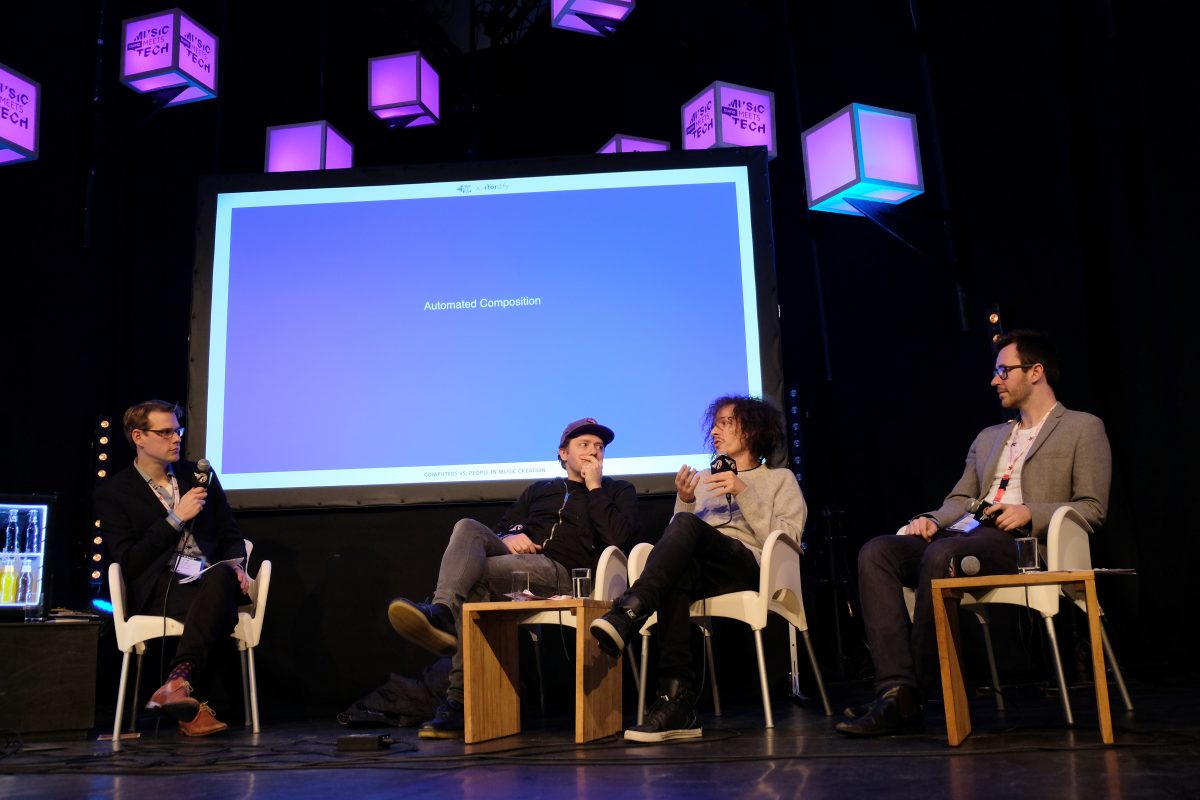 During the Eurosonic Noorderslag conference we presented this question to a panel of experts: Tjeerd Bomhof (lead singer of Voicst and his solo project Dazzled Kid), Colin Benders (from Kyteman), and Matt McVicar (from the British music and artificial intelligence company Jukedeck). The panel is hosted by our own music and technology expert, CEO of Chordify, Bas de Haas.

“Now, the question is: was this piece of music composed by an algorithm, or is this production manmade?” Bas de Haas looks at the audience with a challenging smile. Voicst frontman Tjeerd Bomhof touches his lips, while his eyes light up in thoughtful amazement. Matt McVicar, representative of Jukedeck, straightens his glasses and grins, “Wow!”

In room R6, somewhere in the Oosterpoort, spectators are holding up two-sided flyers. One side of the glossy flyer paper shows a robotic hand—all artificial fingers are clenched except two, the index and pink: rock ‘n roll! The other side of the flyer shows a somewhat similar picture, only this time a human hand is giving us the rock sign. 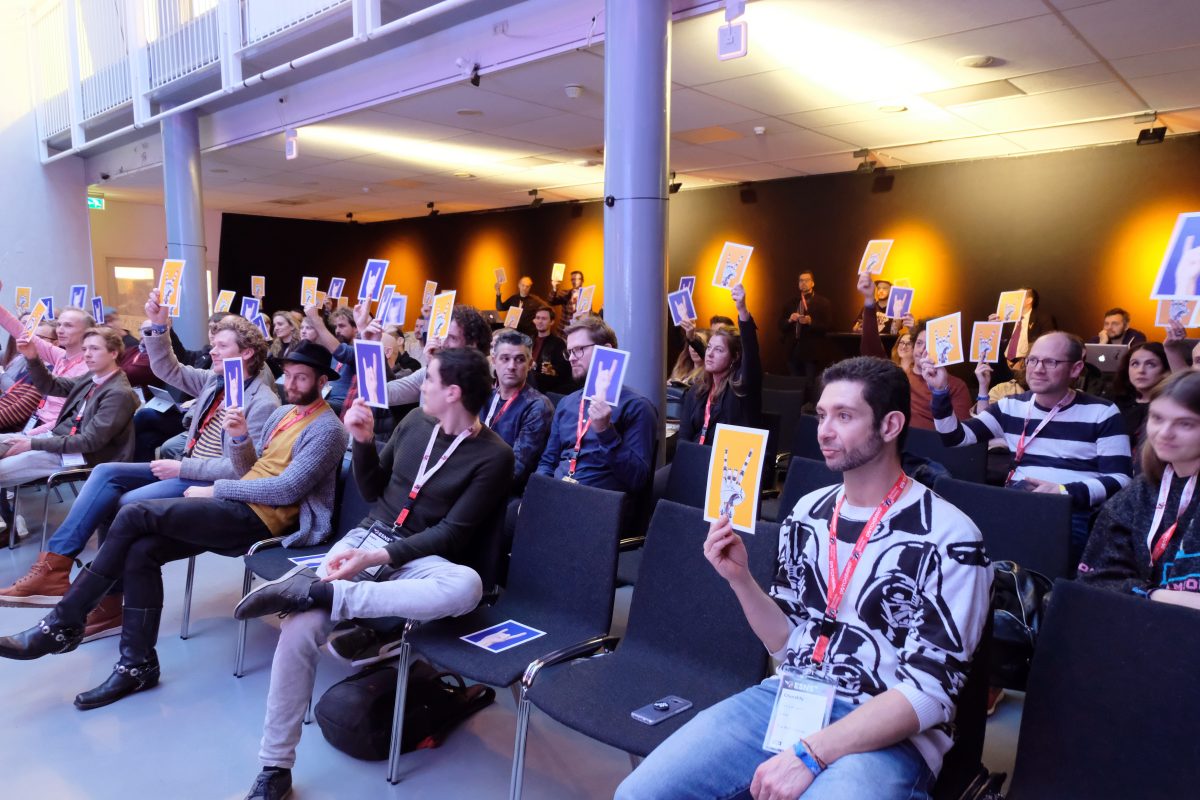 While outside heavy storms are blowing the roofs of houses, some forty people are trying to hear the difference between real music and compositions made by artificial intelligence.

They can vote by holding up their flyer. The robot hand stands for artificial intelligence and the human hand, well… you get it. At the moment it looks like the majority of the voters has a hard time differentiating between man and machine.

Calm before the storm

“That’s kind of bizarre”, says Tjeerd Bomhof. The musician has just been listening to a sample of his own music. Half the people in the room seem to think that the track is produced by an algorithm. Admittedly, the vocal lines have been slightly altered with digital effects, but still. “I am very amazed”, says the producer.

Bas de Haas nods, “As am I. One thinks that the vocals in the song would reveal its humanity.” He turns to Matt McVicar, “Matt, can you produce vocal lines with your algorithms at Jukedeck?” McVicar slowly shakes his head, “No, we’re not that far yet.”

The audience is somewhat confused. For those who don’t know what Jukedeck is, McVicar explains it: “We work with an algorithm that creates music by learning from existing compositions and patterns that occur therein. We can do a lot, but simulating human vocals…” He pauses, then chuckles and says, “We’re not that far.” 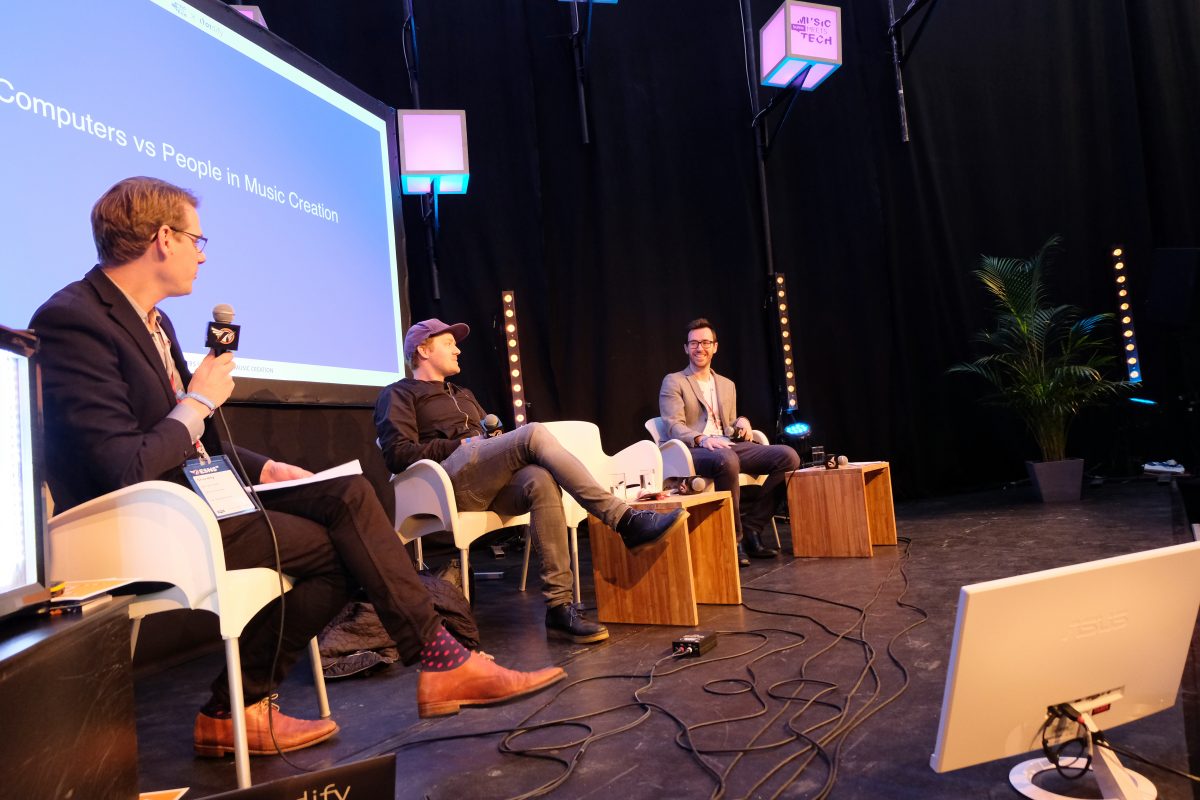 Jukedeck’s compositions can mainly be heard on YouTube—the company lets its users use certain tracks for free, on the condition that they mention their name. While it’s unlikely that the algorithm will produce a plausible human vocal line, other facets of its competencies remain quite baffling.

McVicar gives an example, “You can time a crescendo with great precision.” Bomhof shakes his head, “So I can say: ‘give me an epic eruption on the thirty second mark—because that’s the climax of my blogpost—and then the algorithm builds a composition around that?’” McVicar nods, “Indeed!”

This is the end…

Bomhof—who’s income depends partly on selling compositions to companies and advertising agencies—takes a moment to gather his thoughts. Then he states: “As we’ve seen, people can hardly tell the difference between your algorithm and my music,”—McVicar nods—”at this moment we can hear Jukedeck mainly on YouTube, but how long will it take for big companies to use it, making producers of advertising music obsolete?”

De Haas looks at the members of the panel, “That’s already the case right Matt? I can recall that Coca Cola used a track for an advertising campaign.” McVicar takes a sip of his water, “Yes, that’s correct. In South America a song made by our algorithm has been used for an advertisement.”

He looks at Bomhof, “The goal of Jukedeck is not to replace humans. It’s meant as a tool to help musicians. For instance, to get over a writer’s block, or as an inspirational tool.” He falls silent for a moment, “Would you use Jukedeck as a tool for your compositions?” Bomhof laughs, “For my commercial assignments? Definitely! If this will save me time, so I can reserve more space for my own work, then I wouldn’t say no to that.”

De Haas looks at the audience. There seem to be more than enough questions at the end of the discussion. A woman takes up the microphone, “Matt, you said people can buy compositions from Jukedeck. That means you can completely own the rights to the song. Isn’t it weird that someone can buy a piece of music from you, register it at Buma [ed: Dutch interest group for musicians, warranting copyright law] and subsequently make money off it?”

McVicar clears his throat and repeats the question, to be sure he understood, “You mean that someone registers a song made by Jukedeck as if it was his own?”—the woman nods—”That sounds like a shady enterprise, but to be honest, I’m not informed enough to answer that question.” 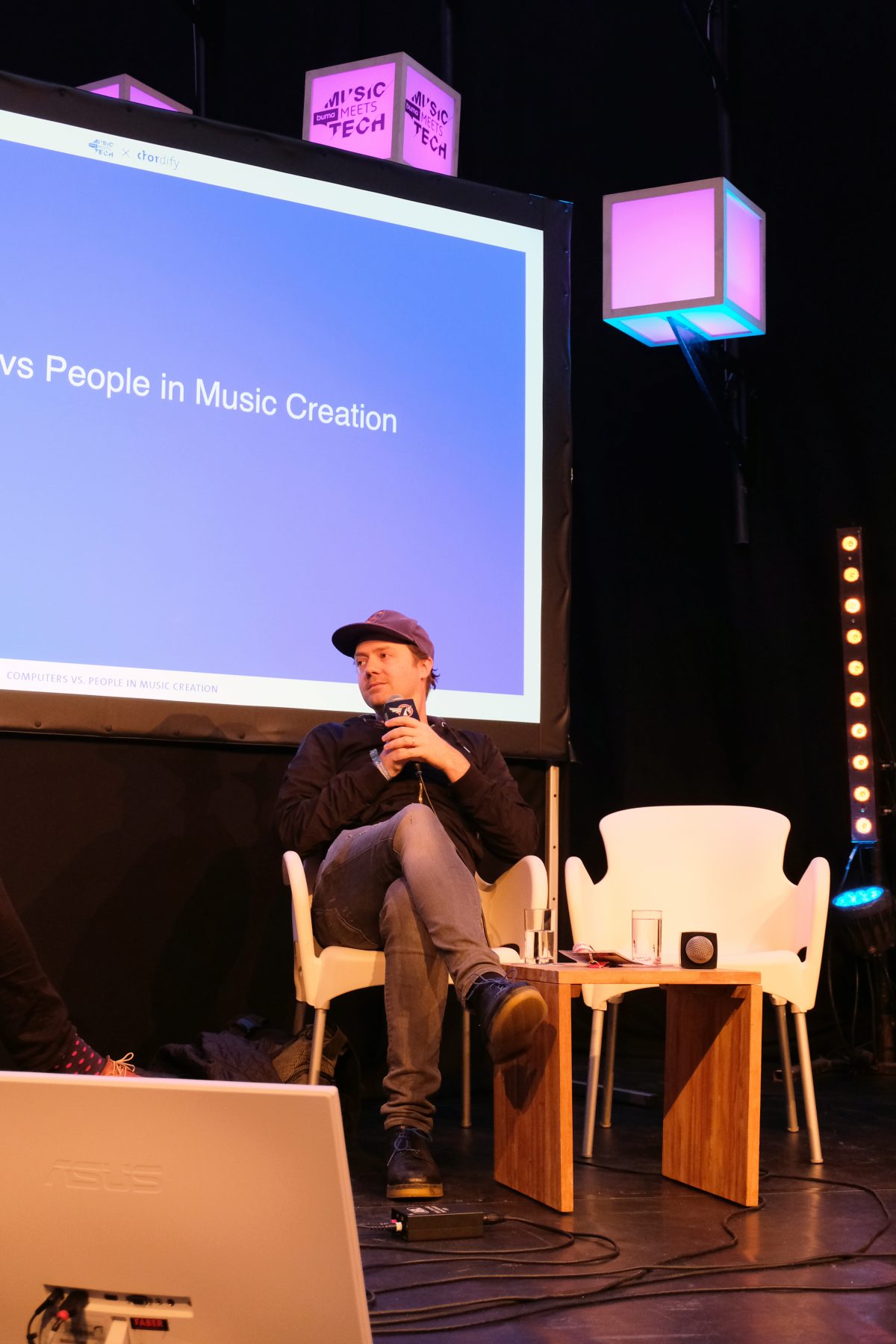 McVicar explains to the audience that he doesn’t know enough about the legal details to react to questions concerning music copyright law and ownership issues. “What I can say, is that we can’t request how many people are using our music from YouTube for example, while a real producer can. So, we’re in a grey area.”

The hour reserved for the discussion is almost over. Bas de Haas is about to state his closing remarks, when Colin Benders walks into the auditorium. Benders was considerably delayed because of the storms, just like fourth panel member François Pachet (director of Spotify Research Lab). De Haas welcomes Benders, “Very good that you can still join us Colin!” Benders sits down between McVicar and Bomhof. 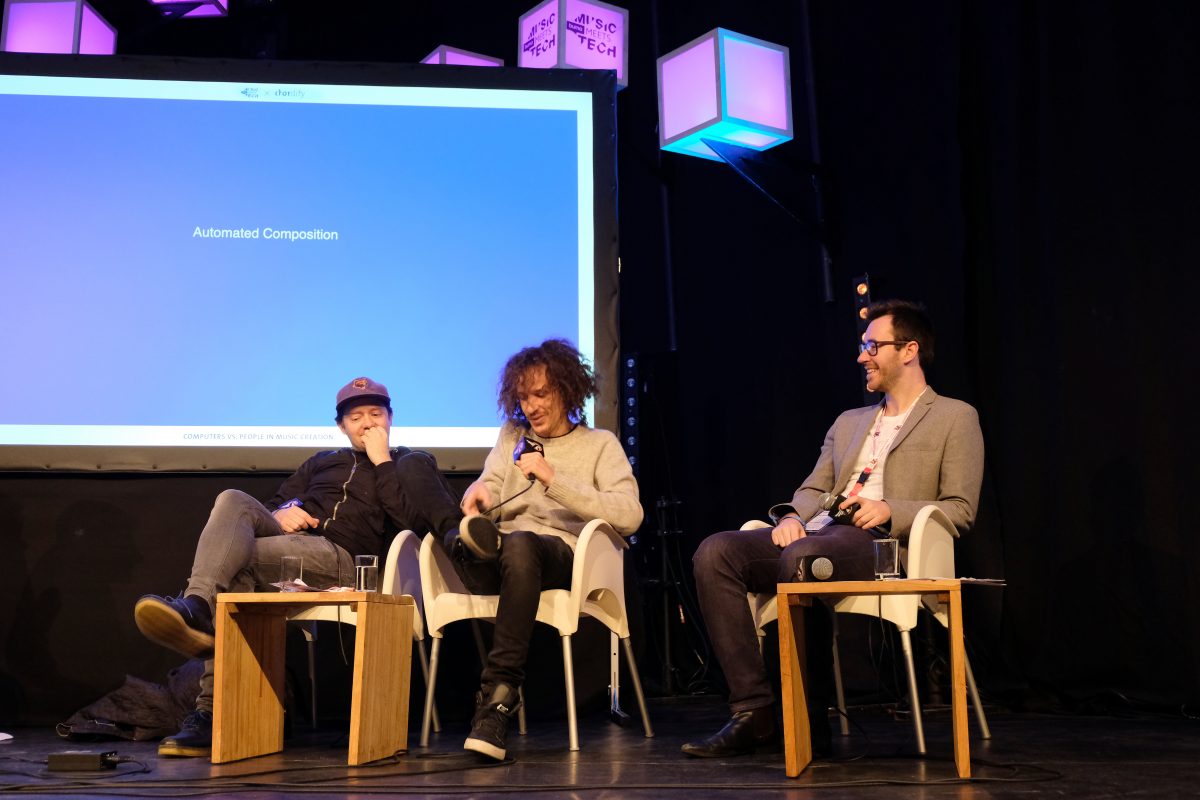 Dazzled Kid jumps to the occasion and asks Benders, “Can a machine put us out of a job? Benders smiles and answers hesitantly, “No…?” With a faint grin he adds, “It depends. If an algorithm learns from humans and gets better through that, shouldn’t we have to change the whole concept of how we look at music? Apparently, we’re very predictable.”

McVicar agrees and adds, “And then there’s the role of emotions, which is significant. That’s something we’re struggling with at Jukedeck. Because; what are emotions and how do we translate them into programming language?” Benders runs his hand through his curls, “In the end it’s all about the story behind the music. People are always curious about the origins of something, the human aspect. If that disappears, the magic disappears with it.”

Bomhof looks at Bas de Haas. Yes, he’s allowed one more question. “I totally agree with you Collin. But, that’s about art. Does that also go for production work; music made for commercial purposes?” Benders shrugs, “Honestly? I don’t know man. You should ask the companies.”