Dans Dans is a Belgian band that brings a whole new vibe to the jazz scene. Is it rock, is it stoner, is it fusion? According to the trio, they make the music they would like to listen to themselves. They are not necessarily bound by any particular genre.

After their performance at the Rockit festival in the Dutch venue De Oosterpoort we have a moment to talk to Dans Dans. They are still eating when we arrive at the artists area. We are offered a glass of wine and the band members start joking around.

Bert Dockx, Fred Lyenn Jacques and Steven Cassiers are known for slowly breaking the wall between the jazz scene and popular genres like rock six years ago with the release of their first album. That’s three albums – I/II (2013), 3 (2014), Sand (2016) –  and a re-release (2018) of their debut album ago. A smile appears on their faces when we ask them what kind of style they actually play.

Is it fusion, stoner jazz maybe?

Fred: “Ha, stoner jazz! We haven’t heard this one before. But does it matter what kind of label you stick on our sound? With our first record we tried to create something we like to listen to ourselves.”

Steven: “The album was released in-house and in a very limited edition. So it sold out very quickly and was a big success. We were lucky, because the album should have been released on a label, but that label stopped. Then we took everything into our own hands and that decision definitely payed off.”

What did you learn from releasing a record under your own management?

Fred: “This first nameless record was the result of the energy we discovered by playing together. We really had a huge urge to record our new sound and launch it into the world. The great thing about this story is that we were so passionate that even when everything was against us we managed to do it.”

Bert: “Yes, we really had to work very hard businesswise. Our management had to take the album to record stores and ask for media attention. For a moment it seemed that the project would fail a week before the release, but once it was out there everything went very well. For us that was proof that we are on the right track with our music.”

Did you guys release only one album?

Steven: “No, we have four albums and we recently re-released our debut record. It’s funny that some people think that our second record is our first. It’s named 1/2 and this is our first album that we released on a label. People think it’s a compilation, but that is not the case.” 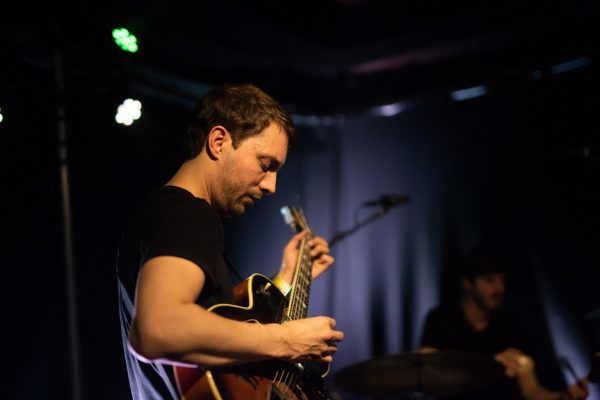 How do you come up with the name Dans Dans?

Steven: “We had a deadline and we had to hand in something. For me, the name is an abstract graphic design. Something like Duran Duran. It sounds good and looks tight.”

We’re talking about a few years ago, but how is your music currently being received in the Flemish jazz scene?

Fred: “In Flanders it was not evident at the time that we would find an established structure that was willing to release our music. Record labels thought that the risks were too big. I think we’ve heard the argument that our music is too difficult about a thousand times.

“Is it jazz, is it rock, is it fusion? People just couldn’t label us. Nowadays it’s quite different. We’ve proven ourselves for the music industry, they see salvation in what we do and now they can market us.”

In Flanders, a revolution is going on.

What does difficult mean?

Bert: “I don’t know if that’s the case. And I don’t know what people experience as difficult. The audience just wants to put a label on your sound and if that doesn’t work they label it as ‘difficult’ music.”

But your music is not that difficult. You have a very clear, carrying groove which is the vessel on which all kinds of things happen.

Fred: “We think so too. Yet a record label must have a clean product if it is to be put in the market. That makes it difficult when you have a band that stands tall behind their own sound and that sound does not necessarily adhere to a specific genre.”

What kind of music inspires you?

Steven: “We all have different backgrounds and tastes. We never had a plan where we wanted to go to stylistically. We do all agree that we love jazz. All three of us have a background in that genre, but within that genre our tastes also differ.”

And yet you clearly break the stigma that surrounds jazz: pretentious and difficult to listen to.

Bert: “That’s right. In Flanders, a revolution is going on. So, you have acts like STUFF. who participate in this. We’re not alone in that. I would also like to make it clear that as a musician I love genres. But if I play myself I can’t take it into account, then I just want to play what comes to mind. We all have that in common.”

Bert do you as a guitarist have a favorite key or chord?

Bert: “Yes! I’m Em all the way. That’s just how it should be when you’re a guitarist. That chord sounds so powerful that I can’t ignore it. I really like old rock ‘n roll and surf music, that’s where the Em is leading.”

Steven: “I love the do major. That is a C. It is the leading key on keyboards, like the Em is on guitar.”

We’ve arrived at the final question I ask everyone. What is your musical guilty pleasure?

Bert: “If you love a song, that isn’t something to feel guilty about now is it?”

That’s true, but sometimes you feel like you are not supposed to enjoy a song from a snobbish point of view. And no Fleetwood Mac is not one of those artists.

Bert: “But it was at the time. In the nineties they really looked down on Fleetwood Mac. The taste has now completely changed and now people think it’s all right. This shows that there is no such thing as a guilty pleasure. You have music you love or not.”

“Dire Straits is another example, it wasn’t a band that always received a positive response. Yet Mark Knopfler just kept doing what he believed in. That’s what I find inspiring, because you shouldn’t adapt too much to what people want. That’s a wisdom for everyone, not just musicians.”

These are wise words. Thanks Dans Dans and see you next time!

Photos by Knelis made at Rockit in De Oosterpoort. Did you miss Dans Dans at ROCKIT? No worries, check their tour dates here.