We have discussed almost all the basic chords in this section. Time to highlight the more advanced triads. This week the spotlight will be on the C#, also known as the Db. Now, why is that so? We’ll give you an explanation below. Follow our Instagram for more Chordify awesomeness! 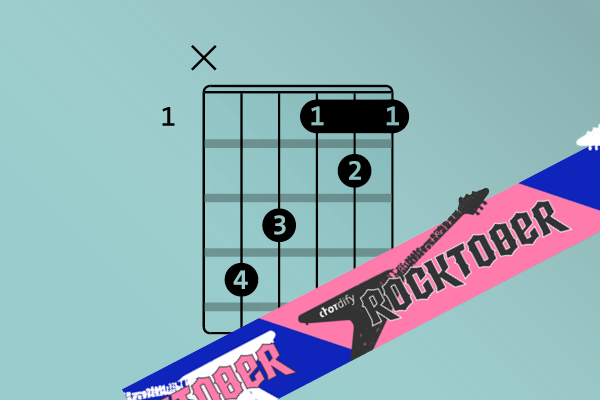 The scale of C# consists of the notes C#, D#, E#, F#, G#, A#, and B#. Its enharmonic equivalent is the Db scale, which consists of Db, Eb, Fb, Gb, Ab, Bb, and C. I can hear you thinking: “Enharmonic what?” Don’t be scared. This is just saying that an interval, note or chord can have different names while sounding the same. It’s all a matter of perspective. Do you flatten the D, or do you sharpen the C? The tone remains the same.

Ready or Not – Fugees

Enthralling, isn’t it, music theory? But it’s definitely not as much fun as jamming. “Ready or Not” we’re moving on to the next section: the part where you play along. First of all, let’s get this straight, they don’t make songs like this anymore. Wyclef Jean’s slick guitar parts and soothing melodies, intertwining with a thick beat; ah, the good old ’90’s! https://youtu.be/aIXyKmElvv8 The song itself is not that difficult for the advanced beginner. It mainly consists of barre chords, and they’re less hard to play than their names might suggest. For example, the Bbm is just a lowered Bm finger placement. The Ebm is, as you can probably guess by now, the same grip as the barre chord Em on the seventh position, only now played on the sixth fret. For the beginner, we recommend using the Chordify capo function on the first fret.

And now that we’re reminiscing about the past; let’s talk about UB40’s “Red Red Wine“, which takes us back almost four decades. Fun fact: did you know that UB40 covered this song from Neil Diamond? His version, however, is a lot darker than the cheerful approach of the British boys. https://youtu.be/zXt56MB-3vc The chord progression of this song looks very much like a standard sequence of triads. The difference is that all the chords you see are played one semitone lower. You can solve this by using the capo function, placing it on the first fret, by transposing the song to D using the transpose function, or by playing around on the guitar neck and trying to solve this difference of a semitone with barre chords.

Holding On – War on Drugs

Playing along with all those evergreens is nice, but you also have to keep your setlist a bit up to date. The War on Drugs is a band that has been very successful with their indie rock in recent years. The track “Holding On” provides a broad spectrum of chords and is a good opportunity to practice quick finger work. https://youtu.be/oMmKCdoUAxo If you’re a beginner you can put the capo on the first fret to make the chord progression more accessible – as goes for all songs in the article. If you don’t, a good training in barre triads awaits you. Remember that it is not a matter of either/or, but a case of and/and. You can easily play the track in D for an audience, but practice it in Db for training’s sake.

It’s not February yet, but that gives you enough time to practice the song “She” by Elvis Costello for Valentine’s Day. The “Nothing Hill” soundtrack may be an old one, but it remains striking. Just like true love. https://youtu.be/O040xuq2FR0 Although the track sounds nice and laid back the chord progression is far from a walk in the park. It is a succession of triads at fast pace. Good for the advanced guitarist or pianist. Because after all, you can also use Chordify for your keys from time to time.

You and Your Blues – Van Halen

We wrap up this chord of the week with some rock vibes. One of the biggest rock legends is, of course, Eddie Van Halen. In “You and Your Blues” you get a quick course in basic chords and how to use them in a rock song. https://youtu.be/uxxENkDqZbs Don’t let the blues get to you even though the chord progression is a bit fast. If you’re a beginner, transpose the track to D or just try to practice some unusual grips like Gbm and Bbm. Whatever you do, do it with a smile. Happy jamming!

Country road takes you home to the jam for which you long
Back in Black all week long - Black Friday baby!