This week’s chord of the week is Ebm. As we’ll see, it’s a triad that lends itself perfectly for raw and powerful songs. Not so long ago we treated this chord’s big brother; the Eb. We learned that the Eb is a just an E played on a guitar that’s tuned down a semitone. This also applies to the Ebm. 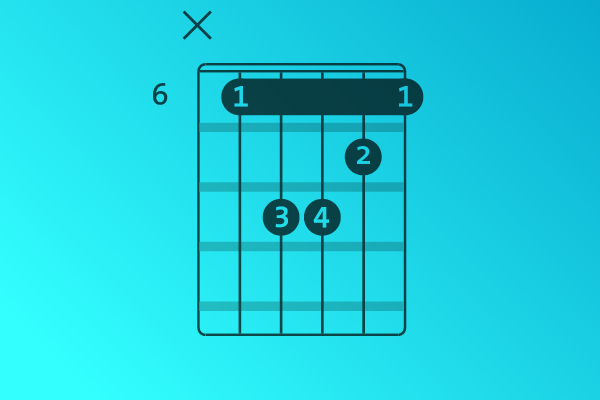 Let’s start at the beginning. The scale of the key Ebm consists of the notes Eb, Fb, Gb, Ab, Bb, Cb, Db. We can’t emphasize enough that one chords can be viewed two ways. A Ebm is a lowered Em, but at the same time it’s a higher Dm, so a D#m. Whatever we call it, the tone is the same.

Okay, all theory aside, now it’s time for the fun part. “Count Your Blessings“, because now you can play along. And it’s not just any song, but one that we get very enthusiastic about. We spoke with diva Mattiel during the Dutch music festival TakeRoot, and she told us that her favorite chords are the E, G, and Dm. Is that also the case on this track?

Looking at the chord progression we can conclude that it’s not made up of her favorite chords. The three most important grips are Ebm, Dd, and B. Keep in mind thought that her guitarist is playing on a down-tuned guitar. Suddenly we see that the finger placements are the same as the Em, D, and C. Ha! There are those favorite chords.

The classic song “Beat It” from the King of Pop isn’t considered an obvious song for beginning guitarists. Eddie van Halen’s solo is not only phenomenal, but also imbues the listener with a feeling of unachievable genius. Well, that’s not totally true.

The most important songs of this composition are Db, Ebm, and B. Yup, only three chords. So, there’s a simplicity in this genius. What are you waiting for? Jam along!

This is America – Childish Gambino

This controversial track by Childish Gambino is a mishmash of classic riffs and phat hip-hop beats. It is not a song that you start playing while visiting your grandma, but at an outing with your hipster friends, it’s a bull’s-eye throw.

The chord progression of this track very straightforward. It’s all about the Ebm, Gm, and the F. Now and then a C or Dm is thrown in the mix, but it’s mainly about the aforementioned triplet. Try it out yourself! Is singing along proving difficult? Ask you friend, sister or brother to jam along with you!

God is a Woman – Ariana Grande

What if you find out “God is a Woman”? Ever thought about that? Ariana did. And she’s not horsing around. This track isn’t just a nice addition to your autumn jam, but it’s also great for developing your skills. It teaches you how to convert a three-chord song into a four-chord song by incorporating an extra low note.

This song is for the advanced guitarist. If you look closely at the chord progression then you’ll see that it has notations such as Db/B and Dbm/Eb. This just means that there’s an extra base note inserted. For instance, if you play a Db chord and you place an extra finger on the B (which you’ll find at the second position on the A string). It’s not that hard, just give it a go! Happy jamming.