Learning to play a G7 chord is a great addition to your development as a musician. That’s why we’re going to show you the different ways of approaching this chord. Pianists, guitarists and ukulelists have all come to the right place because we’re zooming in on all three instruments.

This article, basically, offers a buffet of knowledge. You can approach it as a collection of “quick guides” on how to play a G7 chord on your instrument of choice. Reading this blog post as a pianist, you’re going to be able to find the G7 piano chord in four different places on the keyboard. If you’re a ukulelist or guitarist, you’ll learn four different ways of playing the G7 chord on the fretboard, plus three inversions. Isn’t that something? But wait, there is more.

Learning how to play new chord shapes on the keyboard or on the fretboard is cool. But if you don’t know why you’re playing something the way that you’re playing it, it’s kind of superficial. So, we’ll dive into the magic of music theory and explain why a G7 chord can be played in different ways on all the instruments we discuss. Reading this is optional of course; we totally understand if you want to start jamming right away.

When you’ve mastered the G7 root position (shown in the picture below) on the piano, there are three more, alternative ways of playing a G7 chord on the piano. Why should we know them? Because your flow will increase when you know different ways of playing a chord on the keyboard. If you stick to the basic root positions of chords, you risk sounding choppy. Therefore, to help you avoid this pitfall, we made the diagrams below, showing the G7 piano chord variations.

As you can see, the G7 piano chord consists of the following four notes: G, B, D, F. Why these four notes? That is explained in the music theory section below. Just scroll down after you’ve finished reading this part. As you might already know, there are 12 notes and 88 keys on a standard piano keyboard so it’s not that mind blowing that you can order the notes of the G7 piano chord in various ways.

Since there are four notes in this chord, there are four ways of arranging them. But there is only one root position of the G7 piano chord. The other three are inversions, and they are shown in the diagrams above. Have a go and listen to the differences. How do the sounds compare to one another? Try it, it’s fun!

If you’re a ukulelist, here are four diagrams that show you different ways of playing the G7 ukulele chord. The first one is the so-called root position, picturing the chord as it is shown on the Chordify song pages and the shape you’ll most likely learn in class when you talk about a G7 ukulele chord. But what about the other three chord diagrams? Well, all three are G7 ukulele chords, of course. 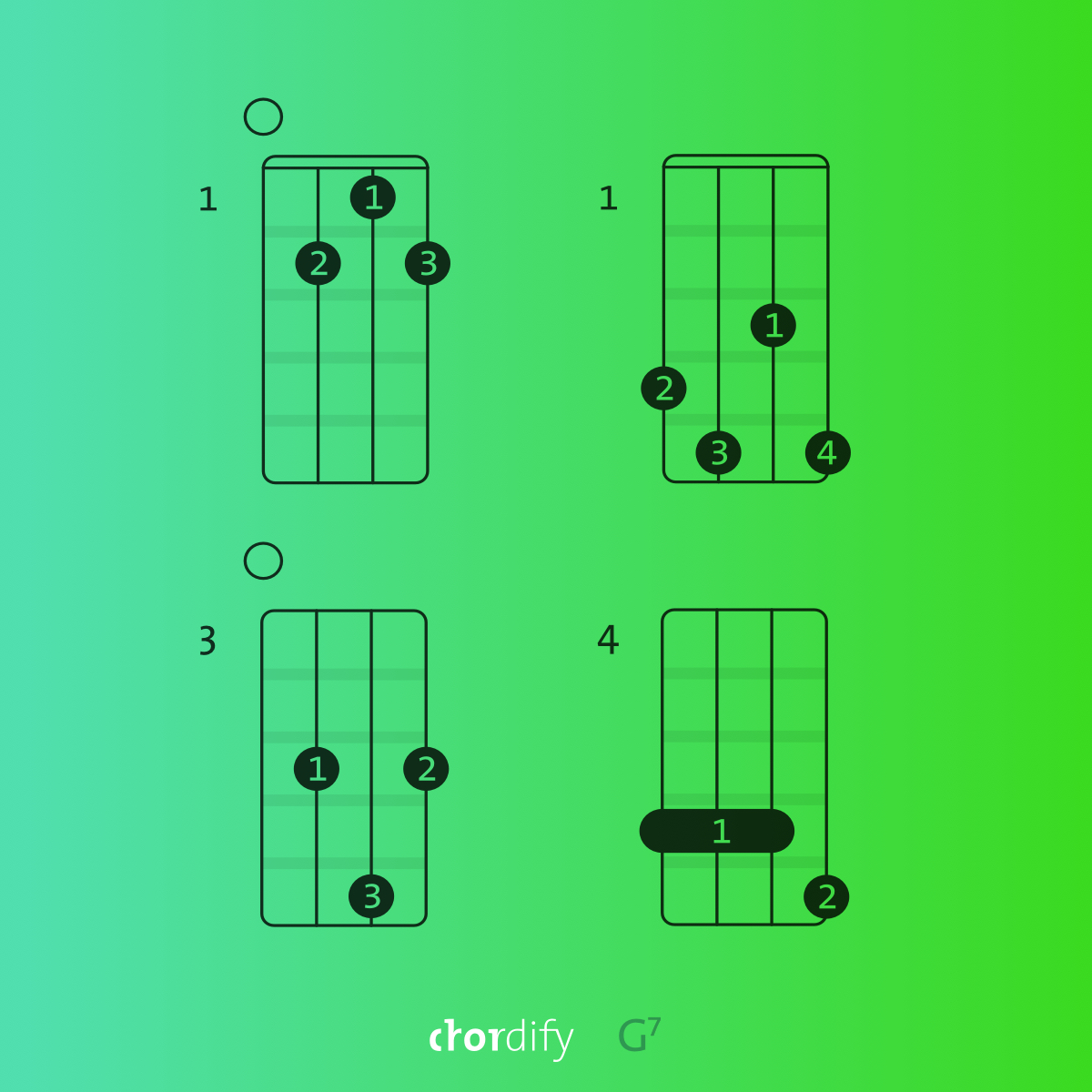 If you don’t have the time nor feel the urge to understand the music theory behind these chord diagrams, you can just accept that these are different ways of fingering the G7 chord. But if you’re curious, you can scroll down to the music theory part to understand why all these different figures stand for the same chord. Whatever you do, if there’s one thing we can say about these chord diagrams, it’s that you should try them out. They will all sound different and the same. Try to hear why and use this knowledge to add some color to your jams.

So, do you want to learn the G7 chord on guitar? You opened this blog post, scrolled all the way down to the guitar part, and now you’re looking at four different chord diagrams. “Four ways of playing a G7 guitar chord? Why? Is one better than the other?” Legitimate questions young Padawan! 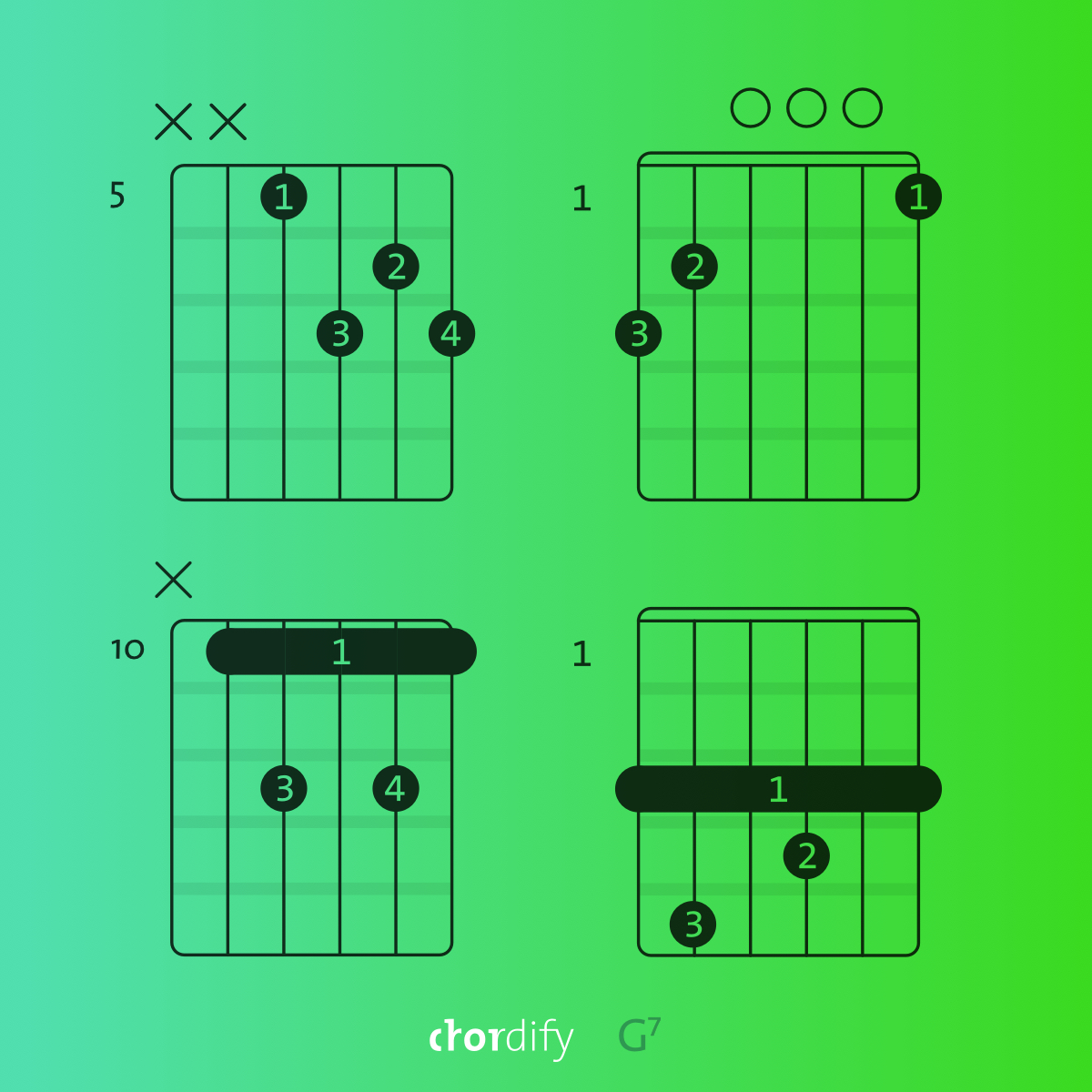 Don’t sweat it. Even if you just learn two of the four figures, you already know more than the average beginner. So why don’t we get started? The first image shows the most common way of playing the G7 guitar chord the root position — you’ll see this in music books, your guitar teacher’s notes, and on the Chordify song pages.

The other three diagrams are part of the game we call “How many combinations can you make with the notes of a chord?” Since there are four notes in the G7 guitar chord, you can make four different arrangements. Check out the music theory section below to answer the question that’s burning on your mind: “WHY?!” If you’re already bored by the words “music theory,” then skip that part and just take it from us: Learn these chord diagrams and they will spice up your jams.

Why can we play a G7 chord in so many places?

Throughout this blog post you’ve been scratching your head and wondering, “Why do we need to know so many ways of playing the G7 chord?” First of all, it’s great that you ask that; it means you’re curious and really serious about improving your skills. Are you ready for some music theory? Here we go!

When we play harmonic instruments — piano, guitar, ukulele — we have to deal with chords. Sometimes, songs can have many chords, sometimes just a few. At a certain moment, you’ll face at least two challenges. One is that your fingers have to jump so much from one chord to another on the keyboard or on the fretboard, that it will almost seem impossible to do.

The other challenge is quite the opposite. Some songs are built around one or two chords, repeating over and over. Those kinds of tracks, where you keep playing the same chord shape, can be a real bore. Sounds familiar, doesn’t it? To face both challenges, we have inversions!

What are chord inversions?

For each chord there is a scale describing that chord. Knowing about scales is key to understanding which notes are in a chord . Let’s take a closer look at the G7 scale: G (root), A, B (third), C, D (fifth), E, F (seventh).

Do you remember the skeleton for basic chords? Right, the skeleton that consists of the root, the third and the fifth. In the case of the G — on which the G7 is based — those are: G, B and D. Playing these notes in a chord gives you a G chord.

To make the sound “spicier” or “broader” we add the seventh note from the scale: F. Our skeleton now expands with one note and looks like this: G (root), B (third), D (fifth), F (seventh). We strongly recommend you remember this order. These are the exact same notes that are played on piano, ukulele or guitar, as we already showed you in the previous chord diagrams of the G7 chord root position.

Inversions, then, are different orderings of the notes in the chord skeleton. So, now we have root, third, fifth and seventh. Let’s put the root at the end and see what happens: third, fifth, seventh, root. Or move the third to the back: fifth, seventh, root, third. Or, last but not least, we place the fifth at the back of the line: seventh, root, third, fifth. Each combination generates a new chord shape. So, next to the original root position, you’ll get three new fingerings. All these shapes produce the same chord. Sounds amazing right? Here are playable, friendly inversions for G7 on guitar. 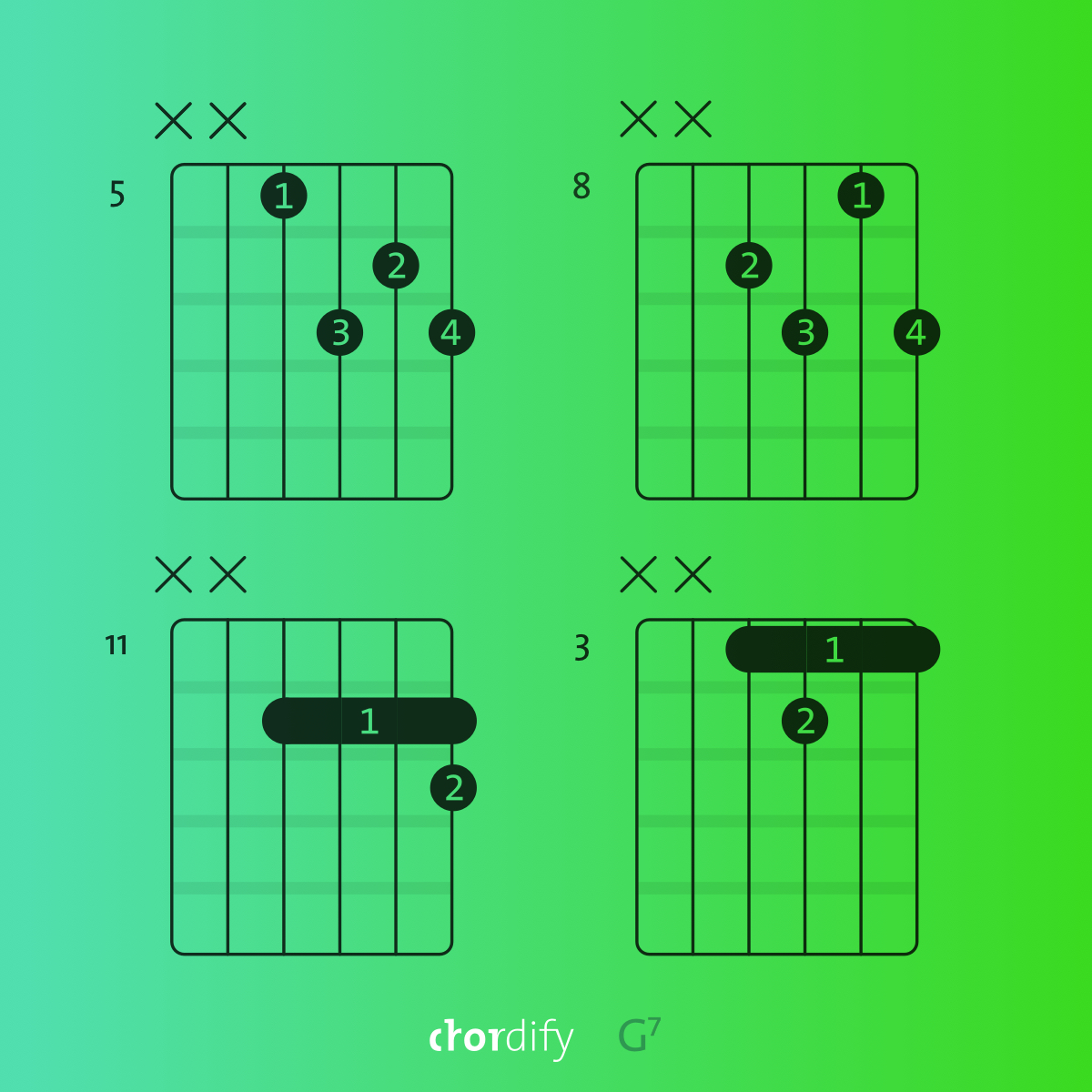 The same thing goes for the ukulele. Check out the inversions for G7 on ukulele below and listen to the way the chord sound changes. 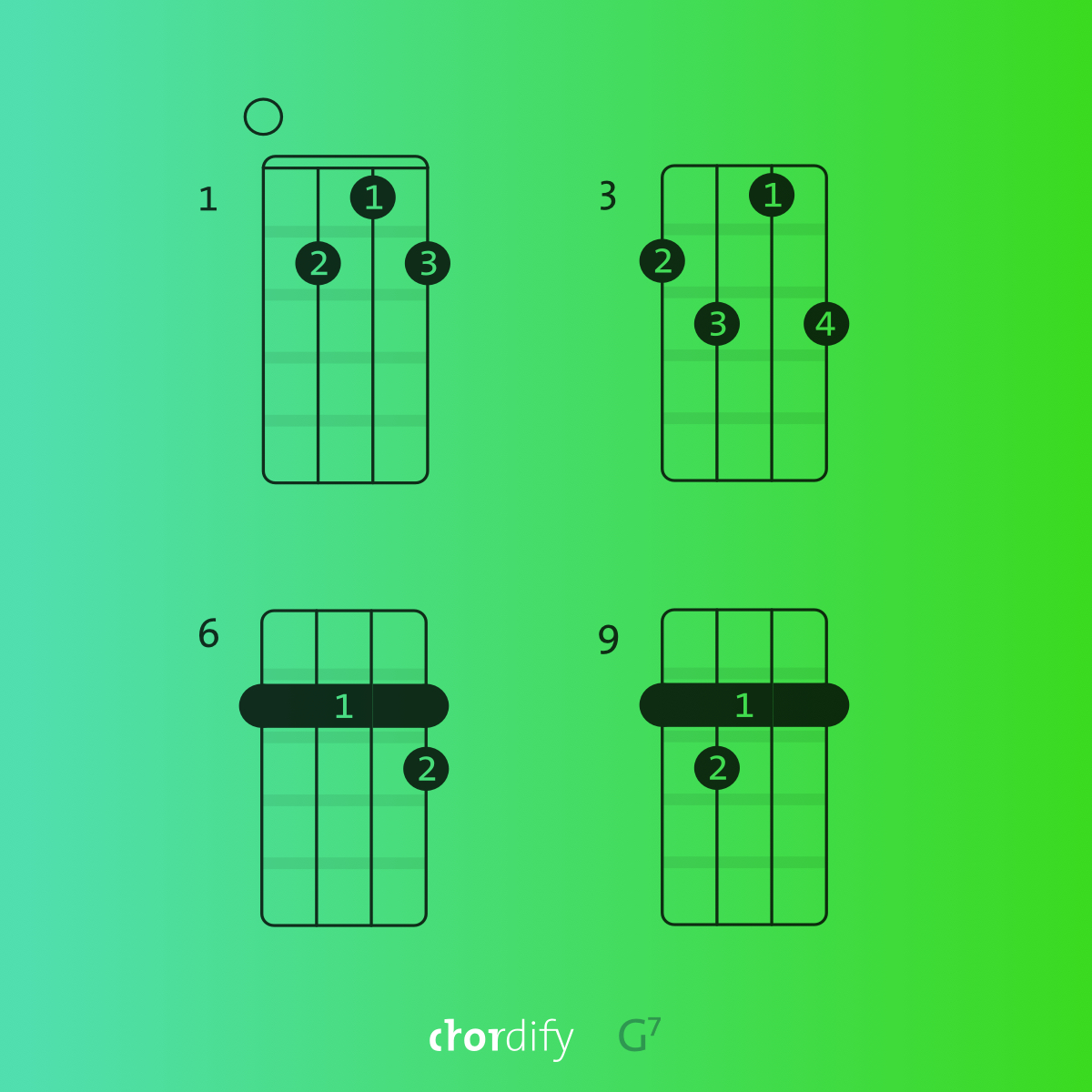 Have you noticed how these chords are spread over the different sections of the fretboard? In both cases, guitar and ukulele, they cover nearly the entire neck. Now, let’s go back to the two challenges described earlier — fretboard jumping and chord repetition.

When we’re familiar with inversions, we don’t have to jump the fretboard because we can choose the shape for the G7 chord closest to our current position. This is especially useful when you have to play a lot of barre chords, or chords located on different frets. With regard to our second challenge, it’s nice to know how to put some variation in the sound. For instance, in a song where a G7 chord is repeated over and over, you can now add inversions. This way you can surprise your band and keep your playing interesting. Cool, right?!

It is worth noting that, in the case of the guitar, there are many more inversions than we have shown in this article. Therefore, it’s interesting to explore the fretboard some more by finding different places to combine the notes of the G7 chord — G, B, D, F. Yeah, we know, this is a lot to process. But, don’t sweat it! Just take out your guitar or ukulele, or sit down at your piano, and start playing. Happy jamming! 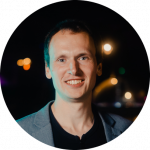 Kirill is Chordify’s academy content creator. Being a professional musician and musical educator, he brings more than 12 years of experience to the table. At Chordify, he explains theoretical and practical music matters. Besides that, Kirill leads the music project The Skypainters and performs in different venues and festivals.