The famous Gibson Les Paul guitar is the backbone of genres like blues, country, rockabilly, hard rock and metal. This iconic instrument is responsible for the revolution of sound in the universe of the electric guitar. We spoke with our musical wunderkind and guitar connoisseur Kirill Dumchenko about this legendary instrument.

Let’s write an article about the Gibson Les Paul, I suggested to my colleague Kirill Dumchenko. He’s the guy with whom I spend hours tweaking our music theory blog posts and articles like the Songs Explained series. Kirill is a walking encyclopedia when it comes to music theory, composing and — as it turns out — guitars. “That’s a very cool idea!” he answered right away. Great, but who can we interview that is an expert on the matter? “Me,” he responded with a little smile.

So here you have it, two guitar nerds talking about one of the most iconic instruments in modern music. Besides the fact that Slash, Jimmy Page and Randy Rhoads played on the Gibson Les Paul, I knew very little about this guitar. During my two-hour interview with Kirill I learned that this instrument turns out to be a game changer. The story is like no other and definitely not always pretty.

“When people meet me, they’re often surprised I’m still alive, and that I’m not a guitar,” laughs Kirill, quoting the man, the myth himself: Lester Paul. “In the early 1950s Gibson wanted to make a guitar that could help them compete with their rival, Fender. Something different that the market had never seen before. For this they brought in an expert to help them: guitarist Lester Paul.”

Kirill explains that Paul was an all-round musician with a background in jazz, country and rockabilly. Gibson asked him to help think of a model that would appeal more to the older customers. Something on which you could play the styles Paul was famous for. So, good old Lester — who was 37 during this period — started sketching his perfect instrument, and by doing so he was the very first musician to bring out his own customized electric guitar, or a signature guitar as we call it nowadays. 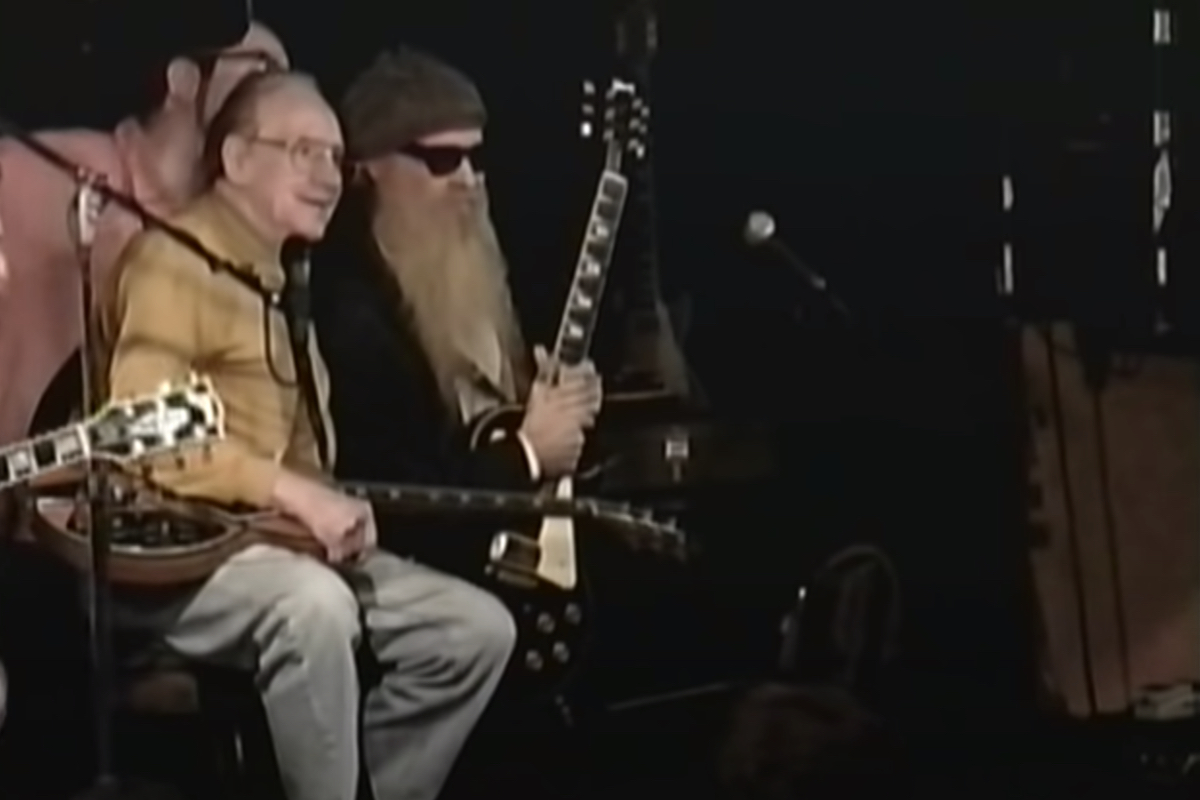 “The story of the Gibson Les Paul is funny in many ways,” says Kirill. “The guitar manufacturer asked a talented guy for advice, and in the end most of his ideas were rejected.” What stayed was: the solid mahogany single cutaway body; the set-in neck, that provides the sustain that Les Paul models are famous for; and the P-90 pickups, that make the sound of the guitar fat and full. Later on, the P-90s were replaced by humbucker pickups, but more about this later.

How about the Goldtop, I asked my colleague. “That was Les Paul’s idea too.” Why gold? “To make its appearance completely different from Fender, of course. Especially when it made its debut on stage at the Paramount Theatre in 1952 together with its creator Lester Paul.”

The big question is: Did this strategy work? The Les Paul as we know it is mostly used by rebels and not the older audience Gibson aimed for. Kirill agrees, “That’s totally true.” “After the Goldtop, Gibson released a few variations of the Les Paul model, like the Custom from 1953. The guitar quickly got the nickname Black Beauty because of its black body and golden hardware.” Kirill explains that all the Les Paul models until 1957 were equipped with P-90 pickups. These are a bit bigger than Fender pickups but still single coil. All this changed in 1955. 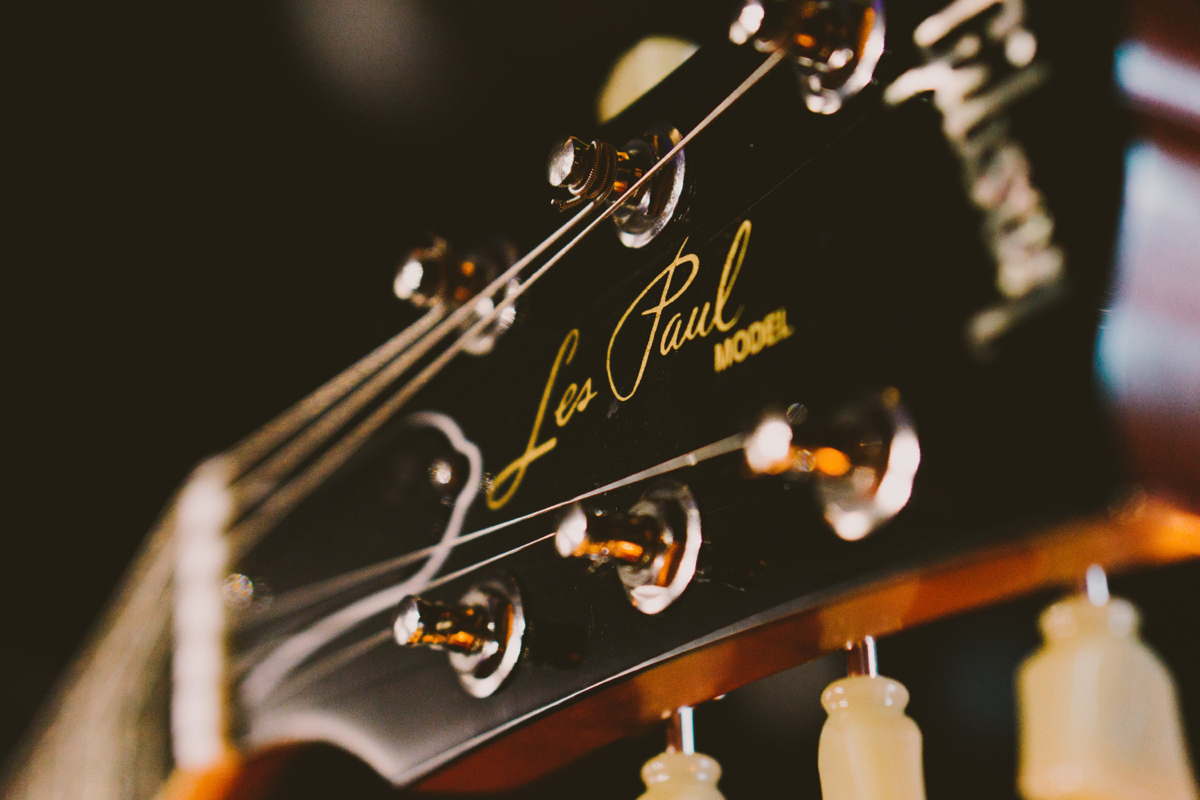 “So, in 1955 there was this sound engineer called Seth Lover who thought it would be a cool idea to combine two single coils into one bigger pickup to reduce the hum caused by single coil pickups. It changed the sound of the electric guitar forever.”  According to our expert, the sound of the humbucker was thicker, fuller and wider than a single coil. So, that’s why something very cool happened when Gibson equipped all Les Pauls with this new technology in 1957.

“The sustain combined with the thickness of the humbuckers are the signature sound we now associate with the Gibson Les Paul guitars.” He smiles. “Cool huh, what we now think of as a standard was actually a wild experiment once.” 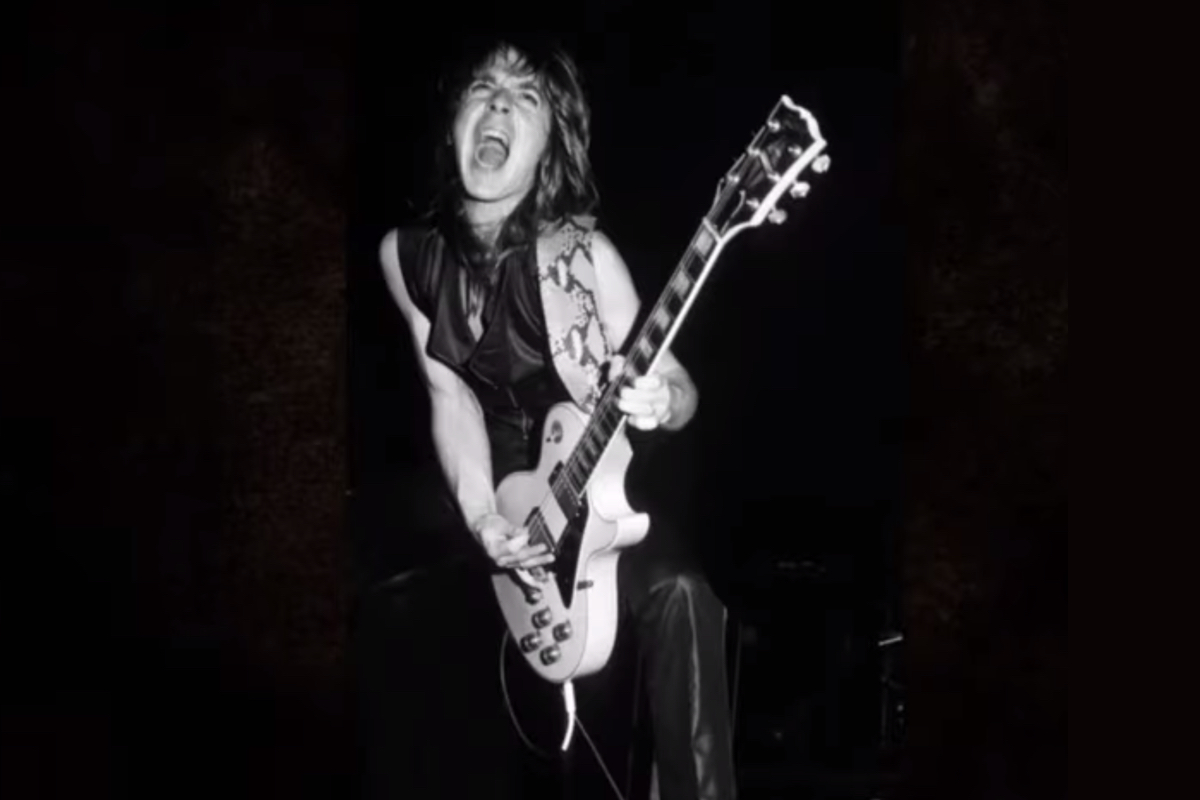 Listening to the story Kirill is telling, I can’t place the remark he made earlier about the history of this iconic guitar being a bit ugly. How could that be, everything until now sounds amazing. “Yeah it does, but the big problem is that in the period between 1958 and 1960 — which is now referred to as the golden age of the Gibson Les Paul — the instrument was considered a fail. The big audience thought the guitars were too heavy, the neck too thick and the instrument overall too bulky. Gibson stopped producing the models in 1961.”

So, the golden age of this instrument lasted less than ten years. In which the manufacturer released three variations of the Les Paul which today are priceless but back then were considered a failure. Am I summarizing this correctly? Kirill nods. “Yes, especially the ’58, the ’59, and the ’60 models are worth a fortune these days. The big difference between them is that one has bigger frets than the other; also, Gibson played around with the thickness of the neck and the top finish. For example, the ’59 model — considered the best Les Paul ever — has a flaming top, a slimmer neck and thicker frets in comparison to the others.” 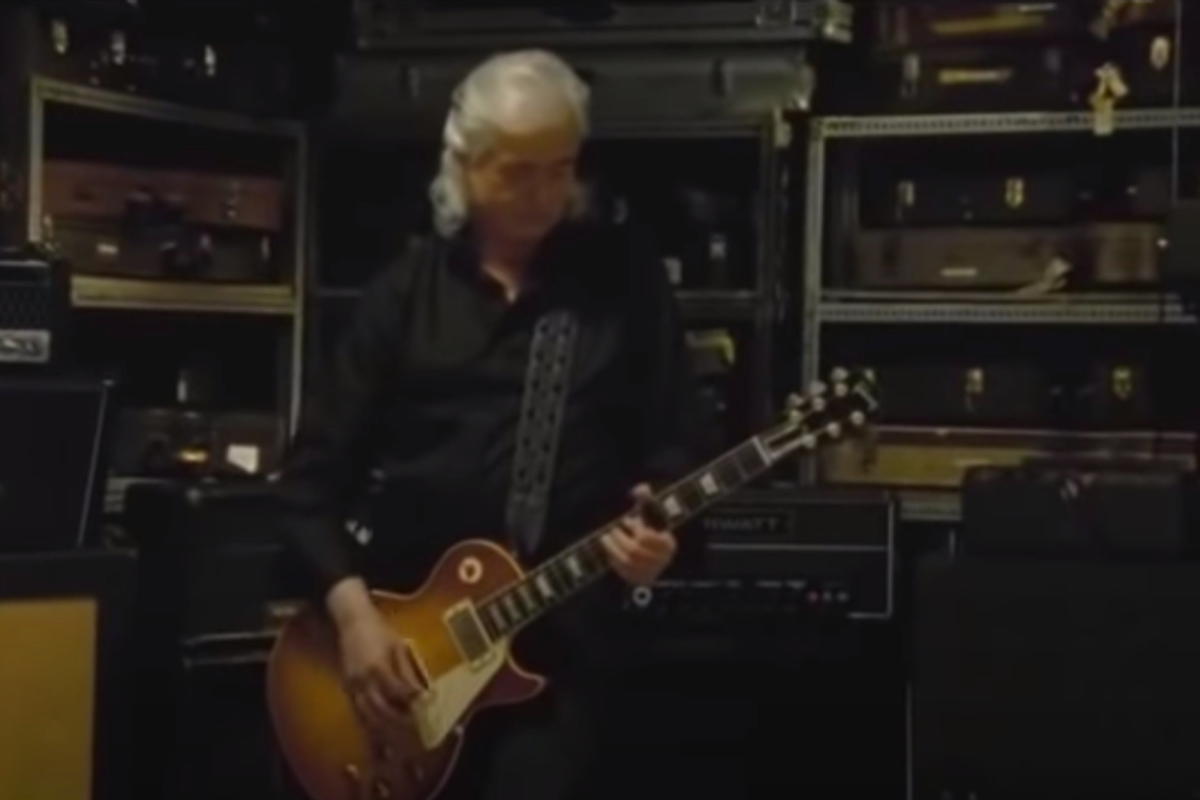 Just when I’m about to ask how, in all this misfortune, the Gibson Les Paul not only survived but also thrived in the music universe, Kirill beats me to it. “All this changed of course when artists like the Rolling Stones guitarist Keith Richards began to play on a Les Paul in 1964. He wasn’t the only one.” Kirill smiles. “It became a bit of a fashion thing. Eric Clapton recorded “Blues Breakers with Eric Clapton” in 1966. One of my all-time favorite guitar players, Led Zeppelin’s Jimmy Page, started using a Les Paul sunburst Standard in the late ’60s, just like Jeff Beck.”

So, in less than a decade the Gibson Les Paul went from zero to hero. A very satisfying hero’s path indeed, I must admit. Kirill explains that the iconic instrument piggybacked on the fame that came with rock ’n’ roll and blues bands like Zeppelin, the Stones and Clapton. “Everyone who wanted to be a rock star looked up to those guys. If you wanted to be Jimmy Page, of course you needed to have the same guitar as Jimmy Page. The rest is history.” 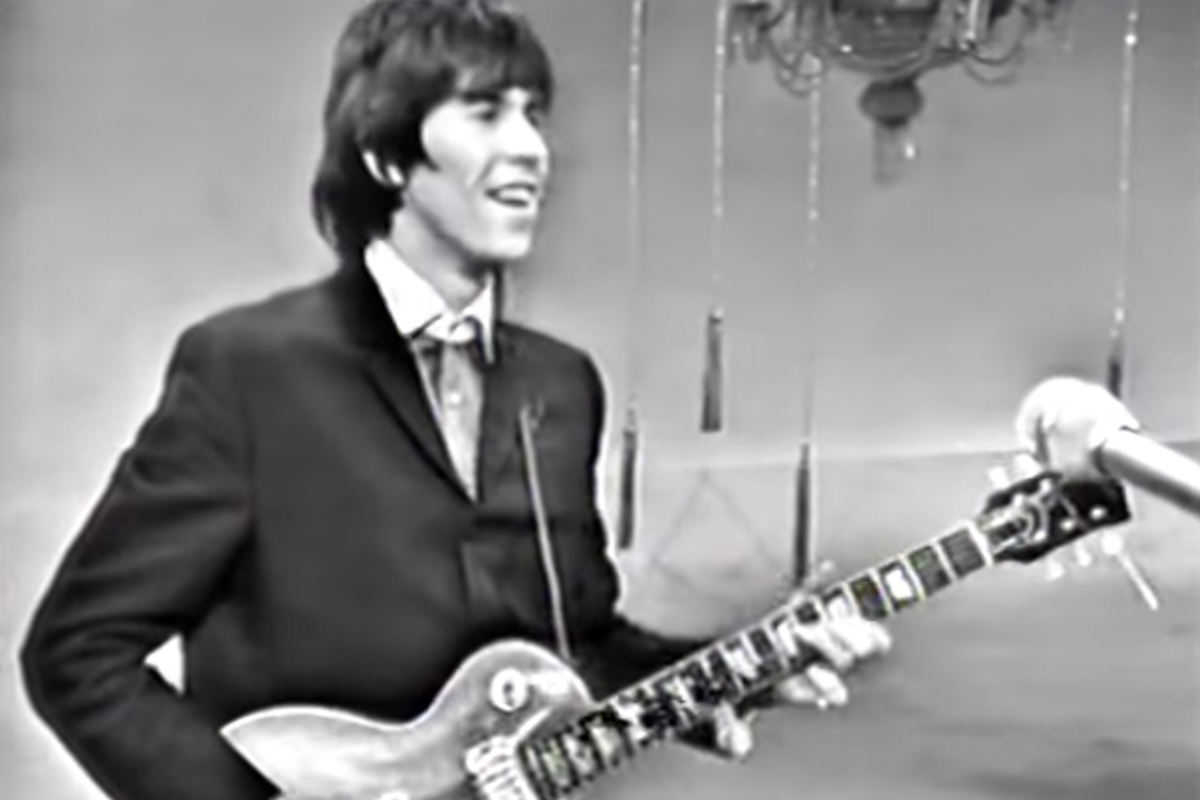 I can’t help but ask the question that’s been burning during this whole story: Is having an original Les Paul really worth it? Kirill’s face lights up in amazement and disbelief. “Are you kidding me?! Of course, IT’S WORTH IT! Having an original Gibson Les Paul is like having the key to Keith Richard’s original sound. And by the way, in Moscow I’ve played on an original Standard model …”

There’s a little moment of silence where it almost seems my colleague is reliving the experience. “It was better than great, but I have to add that it wasn’t a golden age model. Those instruments play like a dream. And no, I don’t own one. Not because I don’t want to, but because it’s worth more than a house.”

The guitarist explains that one part of the uniqueness of an original Les Paul guitar is the fact that every instrument was made by hand back in the ’50s. That’s why Gibson produced only 1700 guitars during the golden age. Every Les Paul from that era is different, just because it didn’t roll out of a factory. “These days everything is automated, but back then it was pure craftsmanship.” 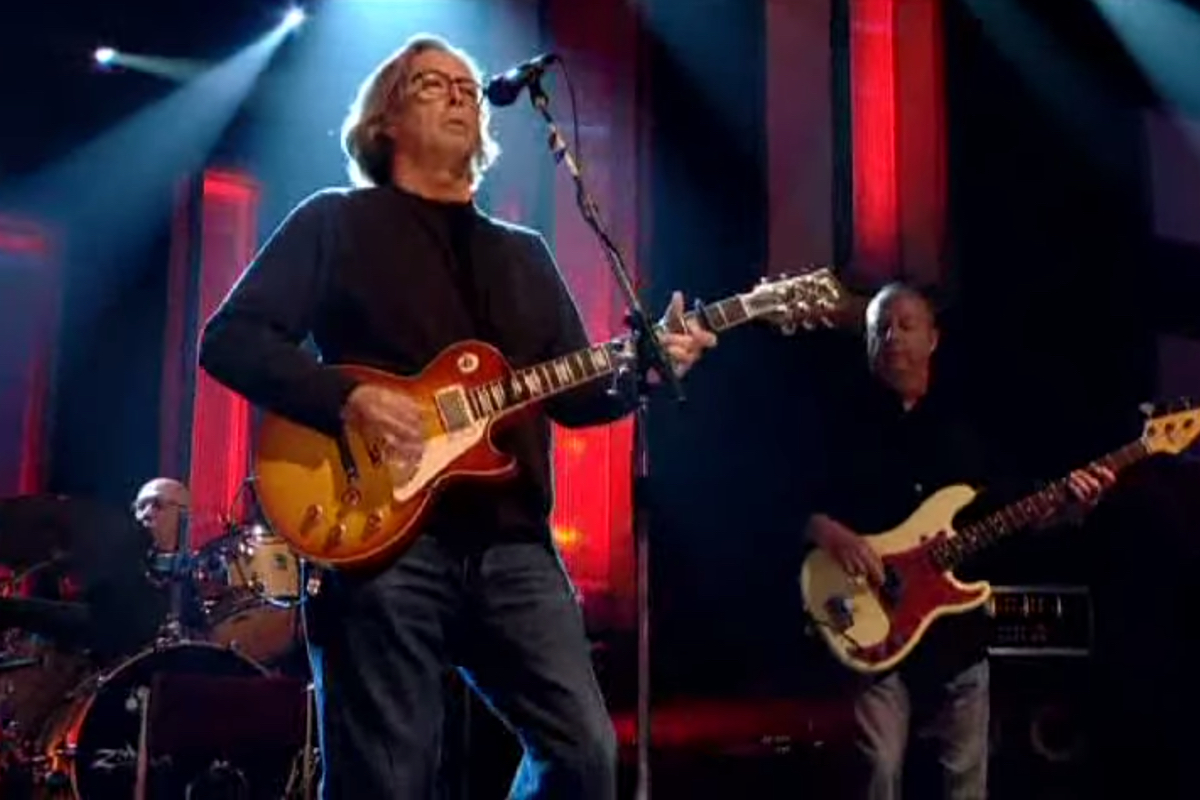 Eric Clapton jamming the blues on his Gibson Les Paul

Alternatives for the Gibson Les Paul

So, this epic sound costs a tiny fortune, but what are good alternatives? As a matter of fact, our expert has a few. “You don’t have to buy a 1958 Les Paul to enjoy the fantastic sound of that instrument,” he says. “There are a lot of new Les Pauls that are good copies of the golden age instruments but way cheaper. Still, you’ll have to think in four digits though.”

Okay, but are there any Les Paul knockoffs I ask, hoping for a positive answer. Kirill smiles. “Of course, the most famous are the Epiphone guitars. They use cheaper materials but follow the overall Gibson recipe for production. So, if you want to start out with something more affordable that still kind of reminds you of the Gibson Les Paul, this brand could offer a nice instrument.” He sighs slowly. “But, still, the sound of a golden age Les Paul is very unique.”

Before we wrap up our conversation, I’m still curious if my partner in crime has a favorite brand. In other words, what would it be if he had to choose between a Fender Stratocaster and a Gibson Les Paul? He shakes his head and sighs out loud. “Man, that’s difficult to say. They both have an iconic sound. Totally different but still amazing. So, I guess what I’m trying to say is that if Les Paul is your right hand, the Stratocaster is your left, or the other way around.”

I try to squeeze a less diplomatic answer out of him but the Chordify music teacher stands his ground. “I can’t choose, honestly. Both instruments have changed the way we listen to music, the way we enjoy guitar sound.” Come on Kirill, gun to your head: Gibson or Fender! “Gun to my head?” He starts laughing. “Alright, alright, Les Paul it is. That’s just because my favorite guitarist of all times Jimmy Page plays on one. I myself have a semi-hollow body Gibson, so you could say that I’m more of a Gibson guy. But… that’s only if you put a gun to my head. Otherwise, it’s both!” Alright, I’m happy we got that out of the way.