Oh yes, we’ve safely arrived at the more obscure-looking chords. At first sight, the G#m, also known as Abm, sounds a bit evil, like some aberration crawling out of the depths of hell. We soon find out that this isn’t the case at all when we take a look at the groovy tracks that have this chords in their composition. 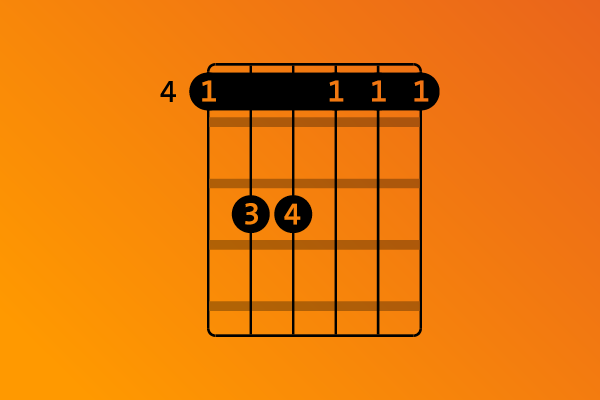 It’s important to keep in mind that the shape of this chord (with a barre on the fourth fret) can be moved up and down the neck of your guitar. For example, played on the first fret this same shape is an F minor chord and played without barre this is an Em. The G#m is what you get when you place this shape on the fourth fret. So it’s not obscure at all!

The scale of the G#m consists of the notes G#, A#, B, C#, D#, E, and F#. These are the notes that fit perfectly in compositions written in the G#m. It won’t come as a surprise then, that these notes are recurrent in the songs that we’ve listed below.

Let’s start with an all-time favorite, “Sing” by Ed Sheeran. Would you expect the song to consist of only two chords? No? Well, it does. But the blazing beat and on-the-mark vocal lines make you want to dance your socks off.

Looking more closely at the track, we’ll see that the G#m7 and C#m7 are the only chords that Ed plays. While longer in notation, these chords are easy to play, you just lift up your fourth finger (pinky) from the D string. The same goes for the C#m7, just lift up your pinky. That’s all, now grab your guitar and play along!

Did you have Barbie dolls growing up? And did you dream about them? Well, Nicki does. And she sings about it. “Barbie Dreams” is a rough-rider track served up with a funky sauce of oldskool hip-hop influences.

The chord progression consists of the G#m, E, Em, Dm, A, and F. In other words: a lot of basic triads. There’s an extra challenge on offer with this song; when you’re done practicing the chords, you can start on the riff that’s woven through them.

Still bouncin’ on those funky hip-hop vibes from Nicki? Good! ‘Cause there’s more where that came from. “Never Recover” by Lil’ Baby, Gunna, and Drake has been rockin’ the Billboard charts. Not without reason, because this song has a phat beat and three rappers that are mc-ing so tight that there’s hardly a pause for breath.

“Is this a song for guitar?” Good question. And, yes it can be quite a challenge to incorporate this in your jam. No one will expect you to play this in your jam. Especially when you’re out for a tea at your grandma’s. What’s even better, it’s easier than you think. The chord progression revolves around the G#m and the D#m, with some excursions to the G# and the D#.

Call Out My Name – The Weeknd

Did we mention that G#m is a groovy badass? No? Well, now we did. We’re staying in the hip-hop and soul corridors with this track, “Call Out My Name” by The Weeknd. This song starts out as a nineties R&B banger, but quickly changes to a hard-hitting soul track after the first chorus.

This twist is so surprising and heavy that you can totally lose sight of the chord progression. But actually, it stays the same throughout the song, alternating between the G#m, and the D#m. “Two chords again?” That’s right, so pick up your guitar and play along. Happy jamming!