Just before Easter Ireland is in the mood to party. The people celebrate the day of the country’s heavenly protector, Saint Patrick. As the legend goes, he rid the island of Satan. Supposedly, that’s why there are no snakes in Ireland. Let’s raise our glass of green Guinness, say sláinte (cheers), and jam along to three songs rooted in the Irish soil. 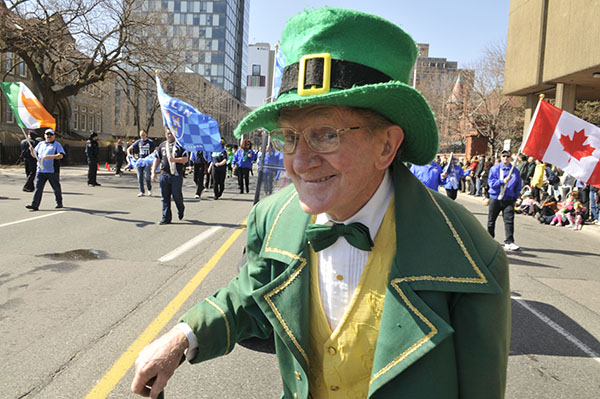 Not only Ireland is shining in green colors right before Easter. St. Patrick’s Day is also celebrated in Australia, Canada and the U.S. The impact of Saint Patrick, who roamed the island in the fourth century AD, can be measured by the prevalence of the Catholic Church in Ireland. Furthermore, Patrick introduced the shamrock as a metaphor of the holy trinity. Today this this clover with three leafs is still the symbol for Ireland. But, not everyone likes St. Patrick’s Day. There are still some ‘pagans’ that silently protest the holiday on the 17th of March, by wearing the image of a snake on their coat or jacket.

Apart from green Guinness, three-leaf clovers and a day-long party, it is tradition that the leaders of America and Ireland come together on the 17th of march. They use the occasion to discuss the situation between Ireland and the rest of the island. The division between protestant and catholic belief systems has been the cause for a lot of civil conflict in the 20th century, where both sides have suffered many casualties. The song Sunday Bloody Sunday, the third single of U2’s album War, describes the horrors of these Troubles in Northern Ireland. Here, you can jam along Sunday Bloody Sunday.

This next song is also a must have for your St. Patty’s jam. Zombie from the Cranberries has an easy structure that consists four chords, E minor, C, G and D, so it’s great for practicing your basic guitar skills. The only challenge will be throwing your voice like the late Doloros O’Riordan. But you can’t have it all.

After consuming the necessary number of pints, the mood will surely be set to party. Let’s say you want to spice things up, and your next drink is a good old whiskey. What better song to add to your jam than Whiskey In The Jar from The Dubliners. And, there’s something to enjoy for everyone. In the seventies Thin Lizzy recorded a hard rock version of the song and if you want to go metal, in 1998 Metallica covered the track on their record Garage Inc. We’re a little bit purist, so we still think the original is the best fit for St. Patrick’s Day. So, bottoms up, sláinte, and happy jamming!

For more inspiration check our channel for a specially compiled list of St. Patty’s Day songs.