One of the marks of a professional (in any profession) is a comfort with the task at hand. If you’re uncomfortable with your tools – if they make you nervous or uncertain – than your trade still has mastery over you. For guitarists, the most immediate and obvious tool at hand is their guitar’s fretboard.

Those who master the fretboard, who can command and control it, without being intimidated, are the ones who are truly professional musicians. How do we develop “fluid” fretboard movement? Moreover, how is that related to our understanding of guitar chords?

The easiest path to fretboard control is by way of root-note memorization, and not just memorizing the notes of all the frets on each string. That’s a part of it, but I want to go a step further and show you how to anchor root notes in your mind based on chord progressions.

Here’s the process I’ll cover in this guitar lesson: 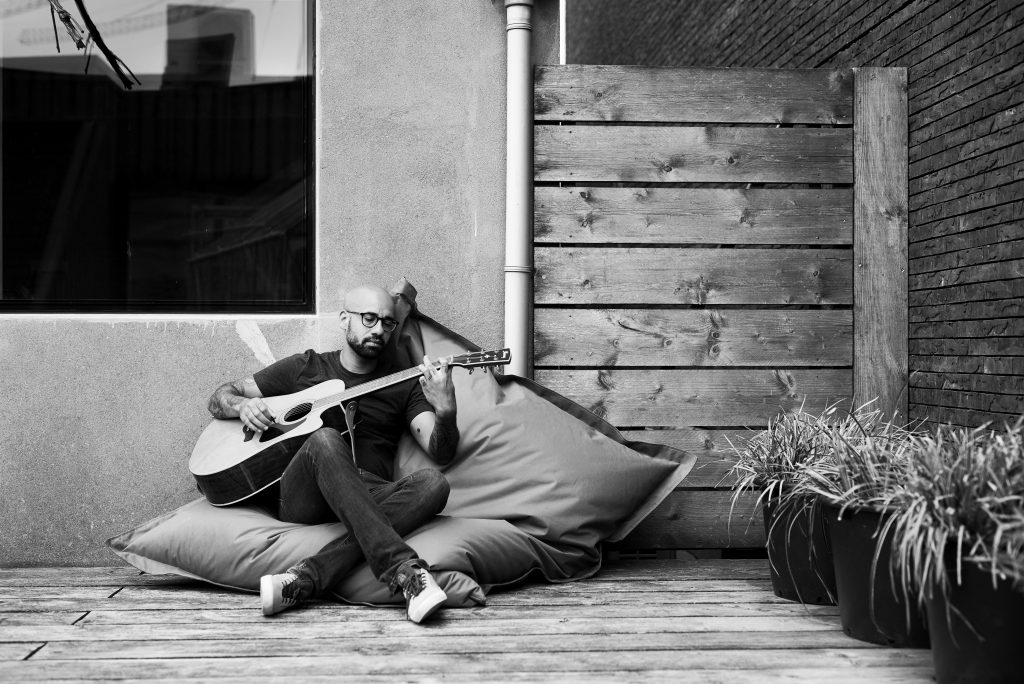 Each musical key has a corresponding list of chords and “common” chord progressions. For example, assume we’re trying to establish an anchor position on the fretboard in the key of C. We would first want to call to memory the C major scale.

Now, look at the chords in the key of C, resulting from these scale notes:

We now have a key, a scale and the chords resulting from that scale. Let’s establish some common chord progressions from the above chords, use them to “plot” the root notes on the fretboard and begin memorizing the resulting pattern.

We should also highlight I, V and II, since that gives us C, G and D roots, creating another extremely common progression.

Now that we’ve got two progressions to work with, we need to plot each chord’s root-note position on the fretboard. My preferred method is to plot and label in a diagram like this one:

With just three notes, we’ve established two clear structures for playing in the key of C with this particular chord progression. These two “grids” at the third and eighths frets can be used for improvisation in the following context:

Moreover, each one can be easily expanded. In the image below, notice the arrows connecting the two C notes on the eighth and 10th frets. We can repeat that interval for the other notes in the graphic as well.

Expanding on Our C, F and G Root Notes

As you can see, the interval we’re using to tie the green notes to the original blue notes are separated by one octave. When you have a root note on either of the bottom two strings (the sixth and the fifth) you can easily find the octave by moving up two frets and two strings, allowing you to effectively double your fretboard real estate for any one progression of roots.

This process gives you a kind of musical data structure to work from, so that if you know the key, you can easily find roots, progressions and notes to work with. You can easily repeat this process using the I, II and V (C, D and G) progression.

You need to compartmentalize all this information in the proper order, based on the key you’re playing in. For example, recognizing the key of C should remind you of the C, F and G chord progression, which should then remind you of the aforementioned spots on the fretboard (the root C at the third and eighth fret positions).

It all happens in a split-second, but it’s extremely helpful if you can tie it all together.

What do I memorize first?

First, when you know what key you’re playing in, think about where the root note of that key exists on the fretboard. For the key of C, we’ve established that the two primary locations are the third and eighth frets on the fifth and sixth strings, respectively.

Once you’ve memorized this, you should begin to associate those positions with the chord progressions most often utilized in the key of C, just like we did earlier. Playing in the key of C should invoke an expectation of the C, F and G progression, since the I, IV and V scale sequence is so commonly used. If you’ve memorized where to go under those circumstances, you’ll easily be able to think through the following:

Even if the chord progression is slightly different, you’ll know the location of the notes in that grid, meaning you can more easily navigate the fretboard and move to different chords or create some kind of melody.

Will I have to memorize all the progressions for each key?

You don’t have to memorize a lot of progressions for each key, rather just a few. However, as you move through keys and chord progressions, it gets easier and more intuitive than you might think. Here’s a good graph that shows you the memorization process from a high-level view. 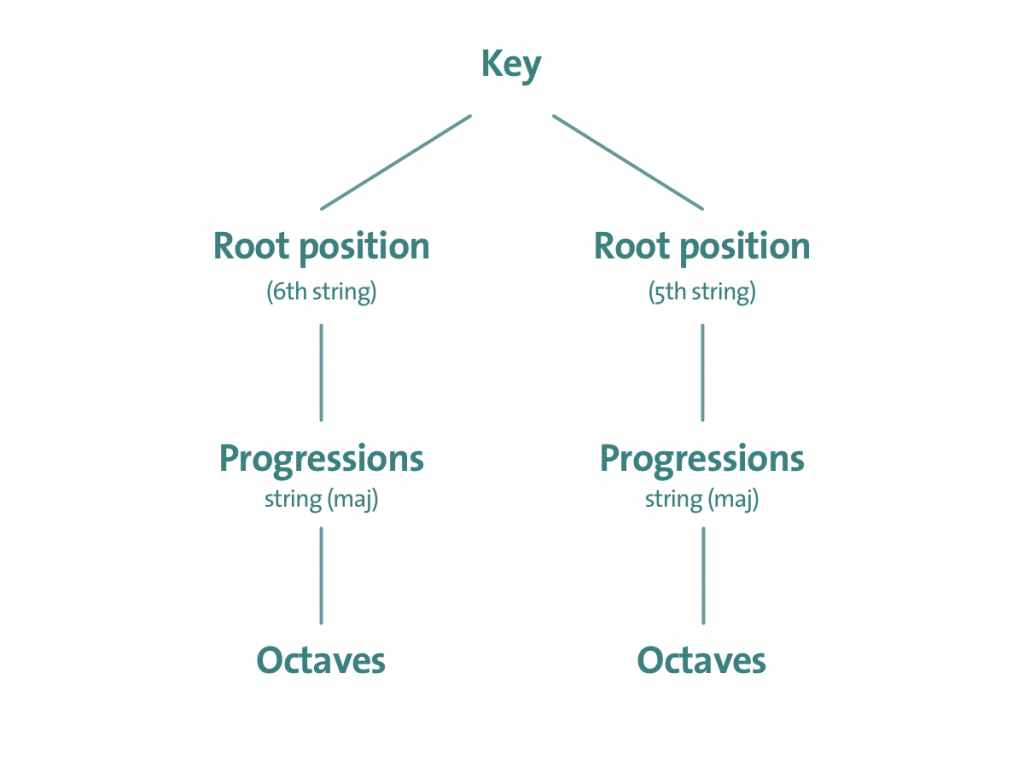 Once you get to the chord progression stage of the graph, I would advise memorizing one that you’re already most familiar with and tend to use in that key. For example, the key of E will probably remind you of something like a 12-bar blues progression in E, A and B.

You’re going a step beyond simply memorizing them in a chronological fret-by-fret order and instead memorizing based on a pattern that you will commonly use.

If you know the notes in the E major scale, you’ll see that it’s once again the I, IV and V sequence that is the most common. Take the roots of that progression and memorize their fretboard locations which, in the key of E, would be the open sixth string and the seventh fret.

To finish up, you can memorize the octaves of each root in the progression. Here’s how your graph might fill in. 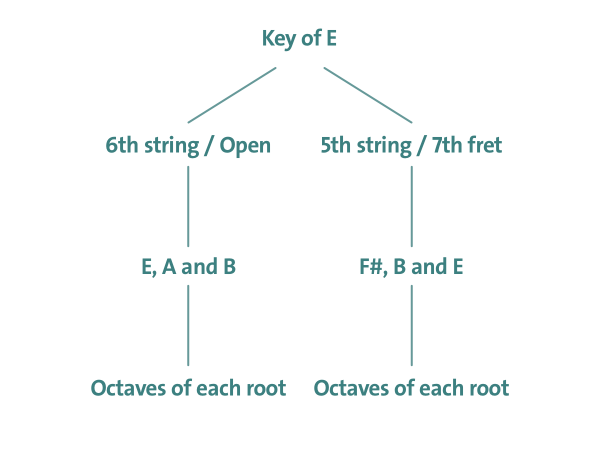 As you might have noticed, the two progressions we’ve listed run together, sharing two out of the three roots (just like C, F, G and C, D, G). This gives you a total of four root notes for memorizing at both the open and seventh fret positions.

Thus, simply memorizing the location of the root E will help you intuitively recall where the other notes are. This is how you can start to predict and anticipate chord progressions. 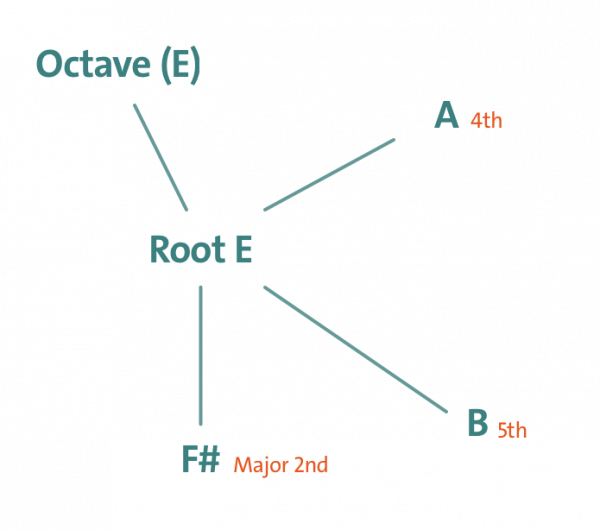 The 4th, 5th and major 2nd tags all indicate the interval spacing between the root E and all additional notes. Again, keep in mind that all these notes are pulled from the same E major scale.

Concluding and Following Up

It can sound and perhaps feel complicated, but this tactic is mostly agnostic of skill level. It’s also not something you’re likely to “master” completely. Because there are always more chord progressions you can learn and fretboard patterns you can memorize. However, looking at keys and the most common progressions within those keys will give you structures that you’ll reuse a lot.

If you know exactly where the C, G and D progression falls on the fretboard and you can move to, from and within it quickly, the time you spend memorizing it will benefit you thousands of times over, whenever you play a G, C or D chord or any variation thereof.

My advice is to take the time to memorize the right things in the right way. Memorize patterns and then reuse those patterns. You’ll be a faster guitar player and a better overall musician, as a result.

Bobby Kittleberger is the founder of Guitar Chalk and a contributor at Guitar World and Guitar Player. He has also developed content for PRS, Seymour Duncan and IK Multimedia. You can hit him up on Twitter or shoot him an email to get in touch.