What does it take to turn a record into a historical milestone? That’s what we’ve been asking ourselves in the editor room. Our first answer would be that a historical record needs to inspire and stand at the beginning of a new genre. A shining example is Pantera’s album Far Beyond Driven. 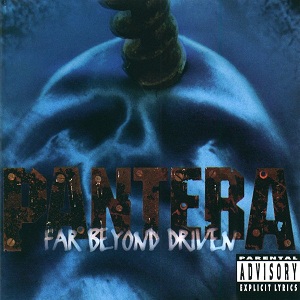 March 22, 1994. The Billboard charts are dominated by Whitney Houston, Mariah Carey and Ace of Base. With the growing popularity of grunge bands like Nirvana and Soundgarden, the glory days of heavy guitars seem to be over. Then the unexpected happens, heavy metal band Pantera releases their seventh album.

Let’s go back in time first. Far Beyond Driven is the third major record label release of the band. It’s a successful attempt to top the previous album Vulgar Display of Power, with a heavier guitar sound, and more sluggish riffs. https://youtu.be/1DdgBI5wkog With their guitars tuned in Cis Dime Darrell and bass player Rex Brown produce a threatening and sinister sound, that sends shivers down the listener’s spine. The low grunts coming out of front man Phil Anselmo’s throat are complemented by the raw and groovy rhythms of drummer Vinnie Paul Abbot.  The album is solid as a heavy metal rock. And, it ignited a metal revival that no one saw coming.

Despite the heavy sound the record enters the Billboard top 200 at number one. To everyone’s surprise. It shows that metal may be sidelined, but it has far from disappeared from the mainstream. The critics are divided on Far Beyond Driven. Some journalists praise the band for producing a unique record without compromises, that still reaches a major audience. Others see a futile attempt to top the success of Vulgar Display of Power. A third group dubs Pantera “an overnight success”.

The beginning of the end

“Overnight success my ass” says bass player Rex Brown in an interview with Rolling Stone. The band, founded in 1981 by the two brothers Dimebag Darrell and Vinnie Paul, is slowly making a name for themselves at the time of Far Beyond Driven. While they once started out as a glam rock band, nine years after their formation they switched to a heavier style, that has become their typical sound. https://youtu.be/c6WZOnEzzJ0 In 1994 years of rocking are beginning to take their toll. Front man Phil Anselmo’s spine has been worn out by incessant touring and performing. His back pain is becoming intolerable and the singer turns to anesthetics. First in the form of booze and painkillers. Later this habit of self-medication develops into a heroin addiction. That’s the beginning of the end.

The track I’m Broken is the first time that Anselmo shows his vulnerable side. Listening closely to the song, we can hear a cry for help. The man who was defined by the media as a tough superhero, can’t face the music anymore. The pain in his back is eating him up. It’s clear that he’s not used to losing control. https://youtu.be/2-V8kYT1pvE Looking back he says, in the documentary Pantera Behind Closed Doors, “This is right when I started feeling the pain in my lower back, and it felt scary. I think this is one of the first times in my life, man, that I had this thing called ‘vulnerability’ kick in, and that was a very uncomfortable feeling.”

Far Beyond Driven is characterized by groovy blues metal songs like 5 Minutes Alone, I’m Broken and Becoming. But there’s also some great material for the shredding fans. The closing track of the album is unexpected: Pantera’s cover of the Black Sabbath song Planet Carevan. https://youtu.be/KFRdZCcGsgc The song was recorded for a collaborative cover album in honor of the godfathers of heavy metal. An album where multiple metal bands give tribute Black Sabbath. The collaboration is discontinued because there are disagreements with the record label. Pantera decides to release the track on Far Beyond Driven. The sound is very trippy and eccentric, but doesn’t lose its characteristic Pantera vibe.

A year after releasing the album Phil Anselmo suffers a heart attack due to an overdose. He takes some time out from the band. Meanwhile tension between the band members increases. Therefore, the greater part of the album The Great Southern Trendkill was recorder separately. The Abbott brothers are working together with bass player Rex Brown in their home studio in Dallas, but Phil Anselmo sends his parts from New Orleans. https://youtu.be/7m7njvwB-Ks Pantera releases one more album after The Great Southern Kill. Reinventing the Steel from 2000 is a tribute to the genre, the fans and the history of the band. Yet, tensions still divide Anselmo and the rest.

In 2003 Dimebag Darrell and Vinnie Paul decide to break up the band to start a new project: Damage Plan. During one of the concerts a confused fan stumbles on the stage with a gun, and shoots Dimebag. The rest of band and the roadies can barely escape. https://youtu.be/k6tFfzRqtxI Local police stop the shooter before he can do more damage. The event not only signals the definitive end of Pantera, but also the death of one of the world’s leading guitar virtuosos. The metal scene is shocked by the death of Dimebag Darrell. To honor him Eddie van Halen even lays one of his notorious Frankenstein Guitars with Darrell in his grave.

In 2014 Pantera celebrates the 20-year existence of their most successful album. Far Beyond Driven 20th Anniversary Edition Delux is a remastered double sides release of their classic record. The fans are treated to a live recording of the Monsters of Rock 1994 concert. Whatever your opinion on Far Beyond Driven is, metal was never the same afterwards. Together with its predecessor Vulgar Display of Power is one of the albums that started a spiritual revolution of the metal genre. It paved the way for bands like Slipknot, Mudvayne and Korn. A new sub-genre was born: nu metal.

Chord progression of the month: I-V-vi-IV
Celebrate music this month! Jam to the guitar chords…