Pip Blom recorded her first EP Short Stories about six years ago using a Loog guitar. She can’t read notes or chords, but that certainly didn’t stop her from recording great tracks with her garage bubblegum band. 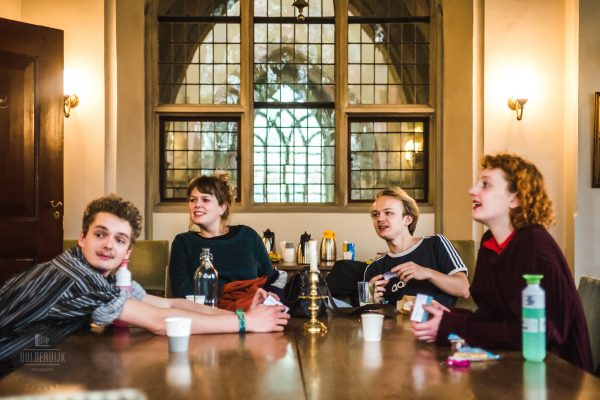 We talk to the young diva and her band members Darek, Gini, and Tender during Eurosonic. A conversation about making a living with your music, how Pip knows chords without knowing them and what winning the Music Moves Europe Talent Award means for the band.

Congratulations on your prize, guys!

“Thank you! We are very happy with it.”

What does winning a Europe Talent Award mean for Pip Blom as a band?

Pip: “As exciting as it is we don’t really know what it will mean for our music career. I think it’s very cool that we got a prize for everything we did last year. It feels like a dessert, a cherry on the cake.

“It was a very nice year. Heavy of course because we have played a lot, stood on stages where we had never been before. If you get a European prize, that feels very rewarding and very nice.”

Pip, you recorded your first EP with a Loog guitar. Do you still play on the instrument?

Pip: “No, I don’t play it anymore. It is nice, because my friend has a little brother and he got a Loog yesterday for his birthday. The guitar is a very nice way to get into music. It’s just so easy. I always mention as an example that my hands are very small. That’s why I have quite some trouble with many guitars.

“Loog has been very useful to me, especially in the beginning, when you are trying to figure out how a guitar works. It also comes in handy when you’re learning how to strum and strike the snares. I tune my guitar in open D, then all you have to do is lay your finger flat and hit the strings. The Loog is very good for that too.”

The past few years were like a rollercoaster for you guys. What does your average day look like?

Pip: “It varies a lot whether we are on tour or not. On tour means getting up quickly and jump into the bus.  After that it’s a lot of driving, usually I’m sleeping during the ride. When we arrive at the venue we are usually; first, very surprised with the way everything looks; and second, we enjoy our dressing room. Then we start building up and do some sound checking.

“At home, days are different of course. I get up at half past nine, then at a quarter to ten I go to the gym where I spend an hour working out. What happens after that differs every day, but I try to have some kind of regularity. It is very different, what we do for a living. I work in a pub, Darek teaches, Gini works in the venue Paradiso. It is all quite irregular, so I try to create as much regularity as possible in my spare time.” 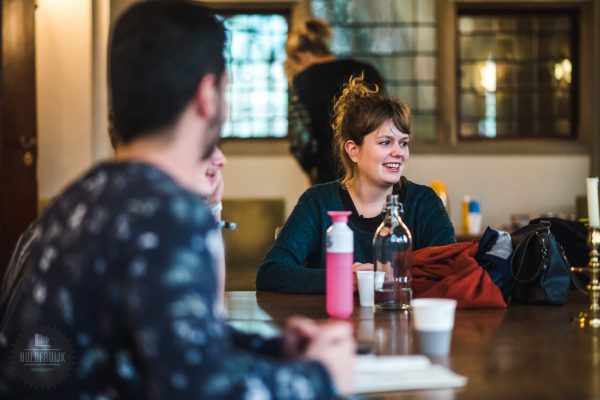 What is the craziest thing you have on your rider?

Pip: “I love mushroom cream soup from Cup A Soup. So that’s what I always put on the rider. As for the rest, we actually don’t want anything special. In the end, you always pay for your rider yourself, because it usually goes off your wages.

Darek: “It’s shaming to ask for things that are just crazy if you don’t really want them.”

Gini: “It is good to put things on it that vary.”

Pip: “That’s why we ask for the local cheese selection. Now that I think about it, that may be the craziest thing on our rider. For the rest, it’s quite limited. As a matter of fact, it’s so short that I have it handwritten.”

Do you have favorite chords to fall back on when writing songs?

You don’t need a name, just tell me the figure and I’ll translate it.

Tender: “Pip, is it the one where you have placed two fingers on the second fret of the second and third string and a third finger on the first fret of the fifth string? That is my favorite; the E.”

Darek: “We mainly use major chords and keep it simple.”

Pip: “I just lay my finger flat on the strings and then I place my fingers in a preset figure which I use all over the fretboard. For the rest, we just call which fret the flat finger should be on. That works pretty well. I do everything by ear anyway.”

Final question, what is your tip for beginning musicians?

Tender: “It has to be for fun. Be hopeful, but keep your expectations low. The pop-music market is difficult.”

C major chord explained on piano, guitar and ukulele…
Everything you want to know about open guitar…