“Silent Night” came out as the undisputed winner when we launched a poll asking you guys which holiday season song you’d like us to explain in our Songs Explained Special. As always, we are here to serve, so in this blog post you’ll find the chords, lyrics, and tabs for your instrument.

This blog post is focused on teaching you how to play “Silent Night” on your instrument. It doesn’t matter if you’re an ukulele ninja, a badass shredder, or an eighties keytar guru, we’ve got you covered. Just select your instrument in the table of contents below. This way we can guide you straight to the part in this article that is relevant to you. For example, if you’re a piano player select “Piano” so you don’t have to read all the stuff that we’ve written especially for ukulele players.

When you’ve finished learning “Silent Night” but you’re still in the zone and hungry for more, we’ve got a special dessert for you: the music theory behind the song. This way you’ll know how to play the classic track and be able to explain what you’re actually playing. Pretty cool, right?

Not a music theory person but still up for dessert? No worries, we’ve got something for you too. How about some historical “Silent Night” trivia? Did you know that this song was written for guitar because the organ of the local church where it was performed for the very first time was damaged by a flood? Now that’s something to think about. But first, let’s dive into the carol itself.

As promised, here’s the ultimate song for your holiday season. This track is a real treat to play and listen to. You know what the fun part about “Silent Night” is? We’ve been doing this Songs Explained series for a while now, and this is the very first song so far that has a 3/4 time signature.

“A what?!” you ask. Don’t sweat it if this doesn’t ring a bell. A 3/4 time signature can easily be described as a waltz because most waltzes are written in 3/4 meter. Not much of a dancer? Don’t worry! One of the most played songs on Chordify is “Perfect” by Ed Sheeran which as it turns out is written in a waltz tempo, just like “Silent night.” So, now that we’ve got that out of the way, it’s time to dig in and check out the structure of this snowy track.

“Silent Night” has three verses. Each verse can be divided into three parts: introductory, middle, final. Each part consists of eight bars. See Figure 1 below. 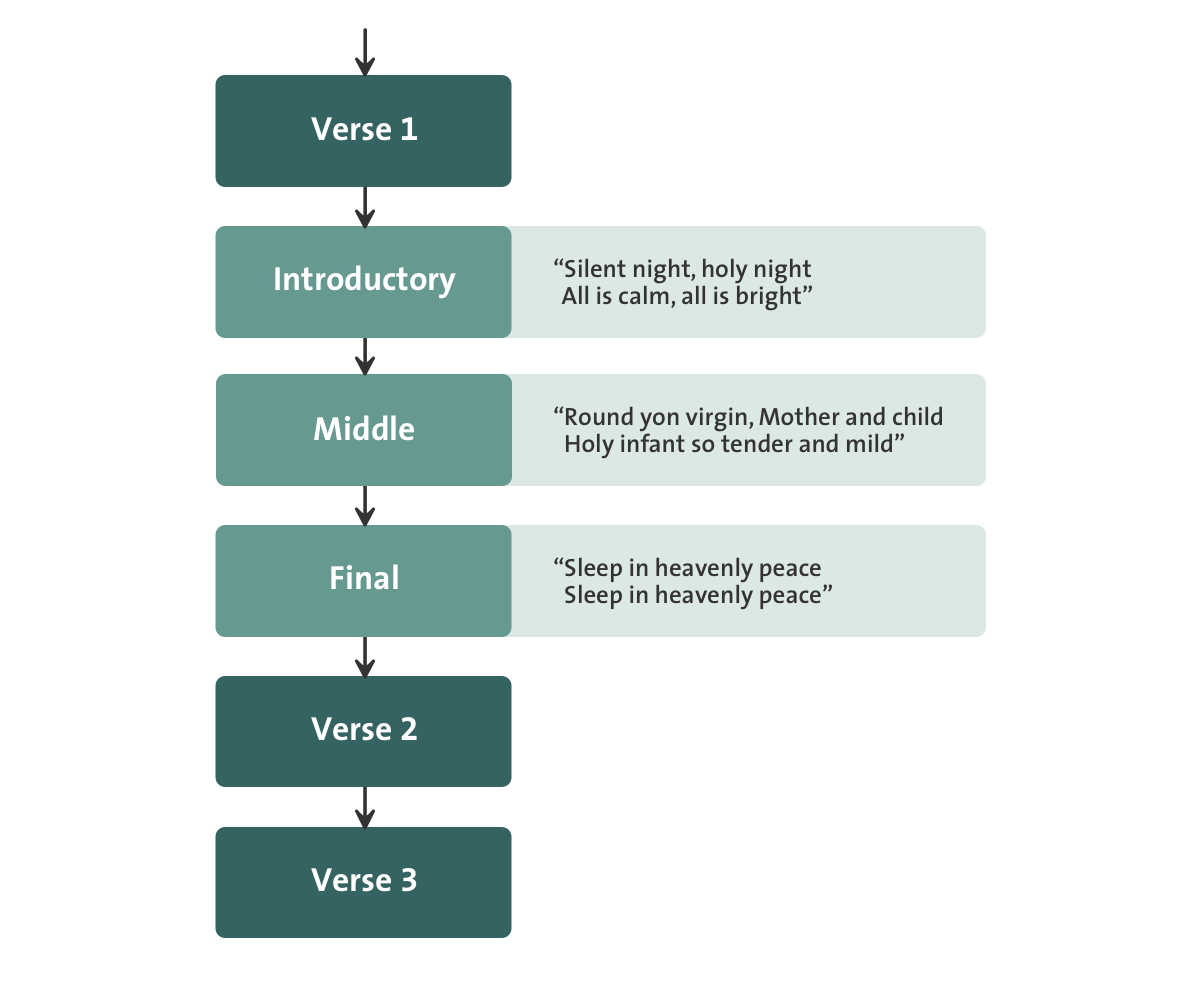 So, how did we come up with these names? Well, we analyzed the harmonics and the lyrics. For instance, the final part in all three verses has a certain statement that is repeated twice. In the first verse it’s “Sleep in heavenly peace.” Makes sense? Nice! Now it’s time to get into the musical part of “Silent Night.” That’s why we’re splitting up this article into three parts, each focusing on a different instrument. So, choose your instrument and let’s get this party started.

Welcome piano players! As we mentioned before, “Silent Night” has just three verses. These verses have exactly the same chord changes. The difference between them is the lyrics. In other words: Once you know the chord progression of one verse, you know how to play the whole song.

Each verse has 24 bars and only three chords! Let’s take a look at a verse in the context of three parts.

The introductory part has two chords:

Here are the chord changes for the introductory part.

The middle part has two chords.

Here are the chords that you play in the middle part.

Here is the chord progression for the final part.

Here is an example of how we can play a verse on piano, combining all three parts together. 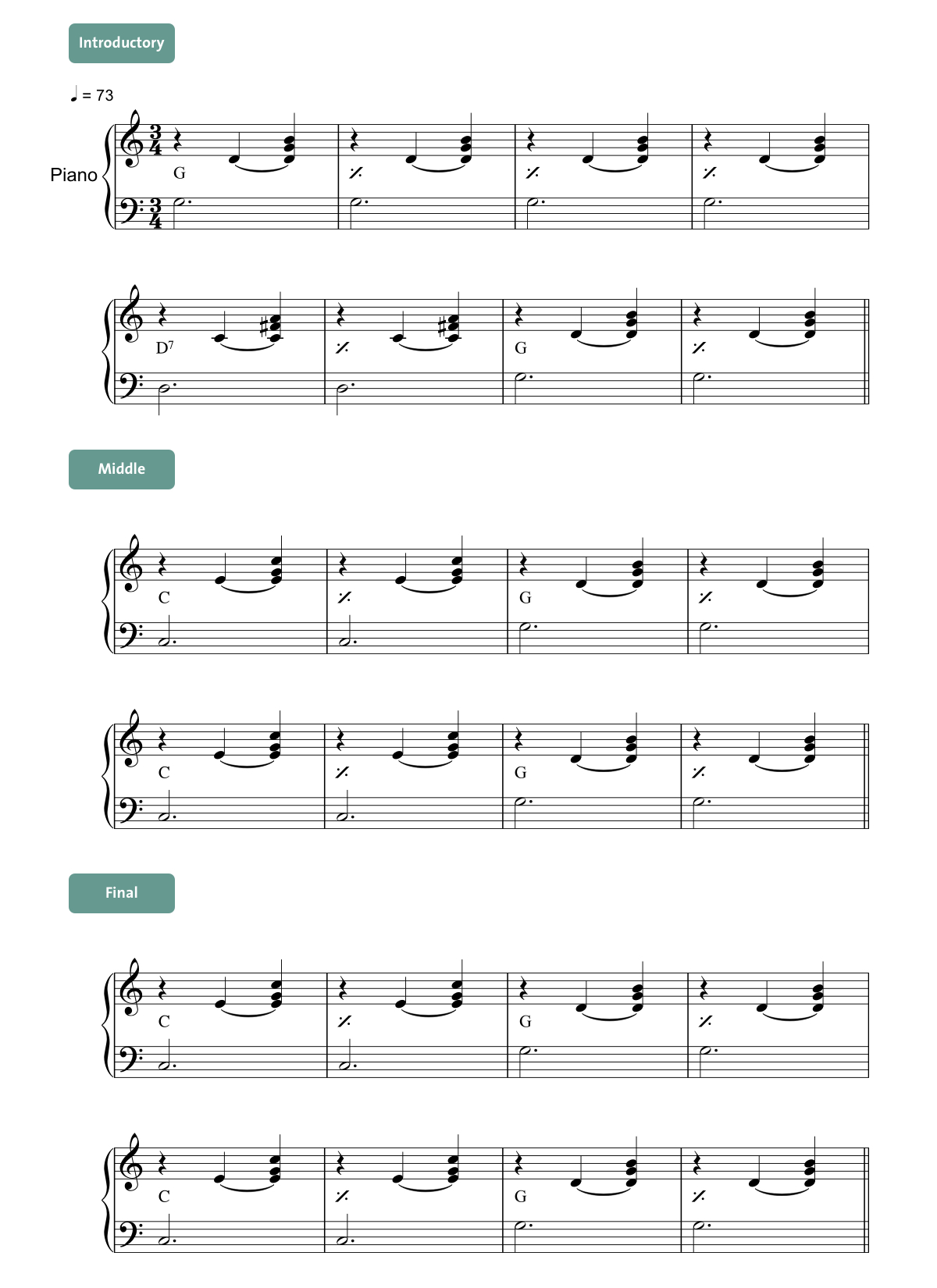 How about we give you all the lyrics and chords so that you can play the whole song? Sounds like a plan!

Well, well, well, who do we have here? Welcome guitar players! As you peeps already saw “Silent Night” has a pretty basic song structure, consisting of three verses. These verses have exactly the same chord changes. The difference between them is the lyrics. So, once you know the chord progression of one verse you can play the whole song. Each verse has 24 bars and only three chords! Cool, huh? Let’s take a look.

The first part — or introductory part — has two chords: the G and the D7.

Here are the chord changes for the introductory part.

As you can see the middle part also contains only two chords: C and G.

Here is the chord progression for the middle part.

The final part follows the same path as the first two by using two chords: the D7 and the G. Yup, the same as the introductory part, only switched around.

Here are the chord changes for the final part.

Here is an example of how we can play a verse on guitar, combining all three parts together. 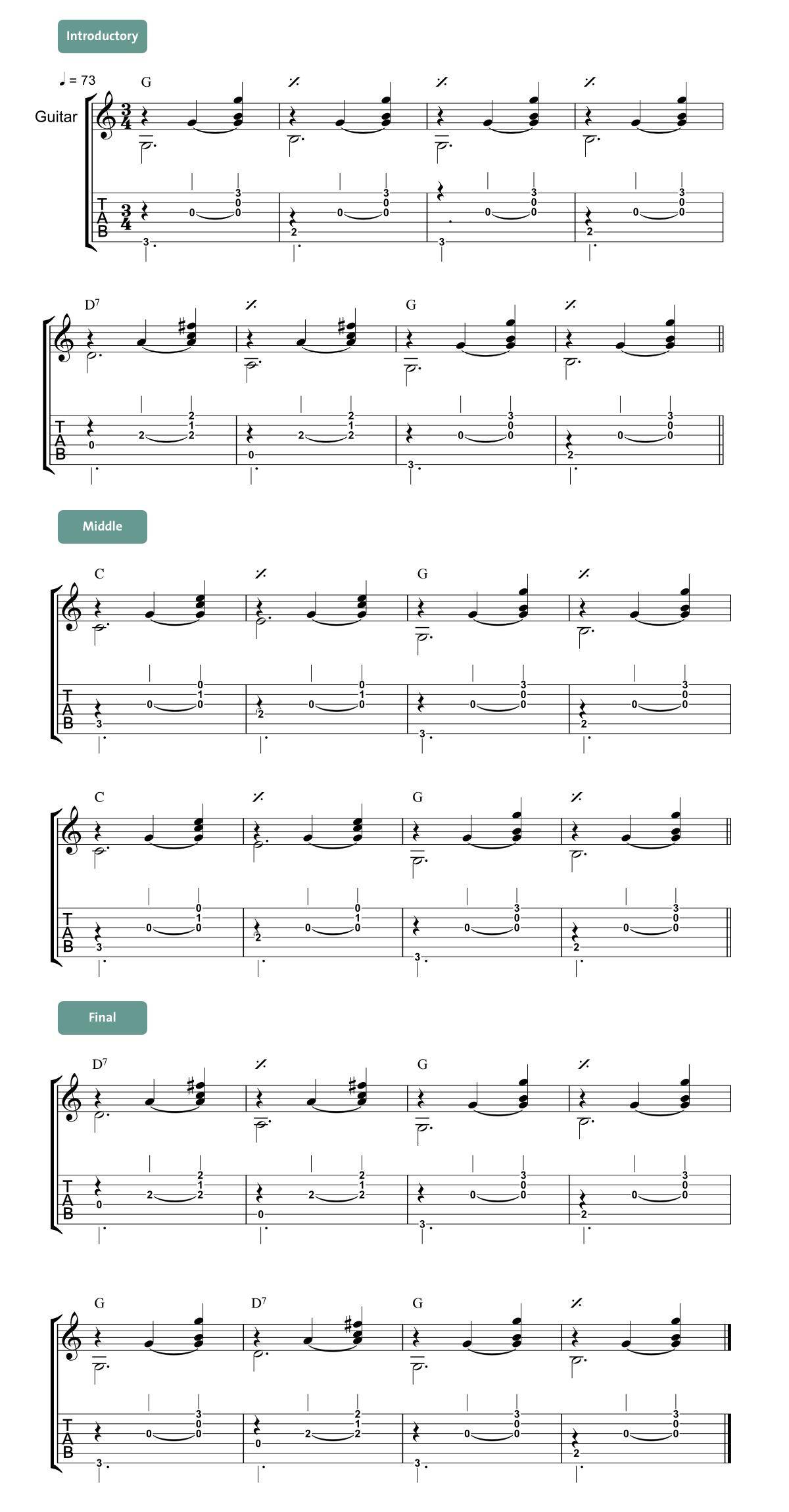 You know what time it is? Below you’ll find the lyrics and chords to “Silent Night,” so that means it’s action time! Pick up that axe and jam the whole song.

Hi there, ukulele master! Do you remember what we just showed you in the song structure? “Silent Night” has just three verses. You know what that means, right? Yup, once you know one, you know them all. Each verse has 24 bars and just three chords! The only difference is the lyrics. Based on the harmonics and the lyrics, we divided the verse in three parts: introductory, middle and final. Let’s dive in.

The introductory part has just two chords: G and D7.

The middle part also has only two chords: the C and the G.

Here is the chord progression for our middle part.

Remember the chords from the introductory part? That’s right, the G chord and the D7 chord. Good, now switch them around, and you’ll have the chord progression of the final part.

Here is an example of how we can play a verse on guitar, combining all three parts together: 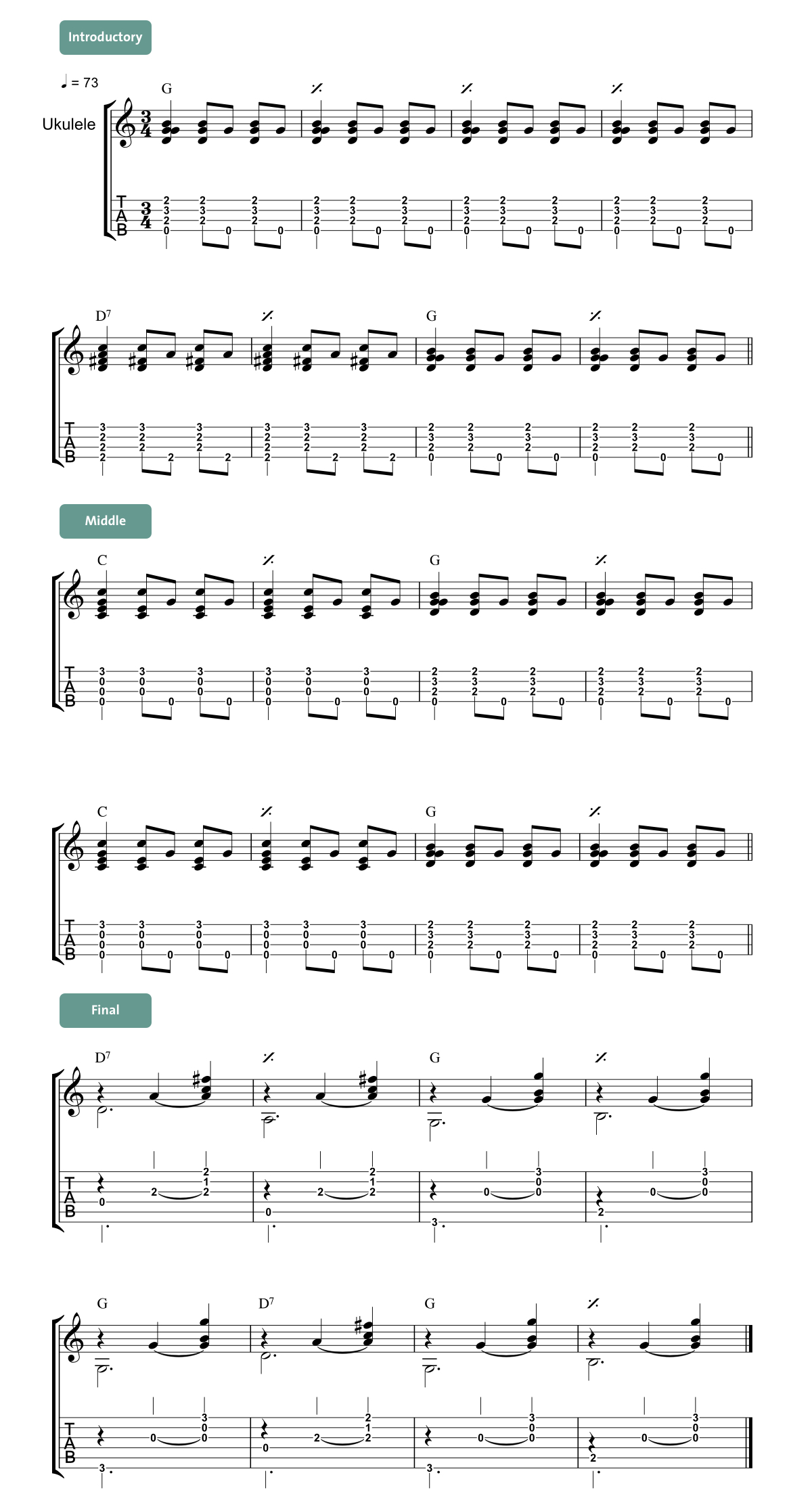 See how to play this in our video tutorial:

So, in the words of Ace Ventura pet detective: “Alrighty then!” Below, you’ll find all the lyrics and chords of “Silent Night.” The only thing you have to do is pick up your uke, and start kicking out those Xmas tree jams.

You’ve just learnt how to play “Silent Night.” Isn’t it a great feeling to be able to play and sing a song you probably know from way back? You know what’s even better? How about learning how to improvise over that tune?

“Silent Night” is a great example of a diatonic song. Simply put, this song is written in one key to which all chords are related. In this case it’s the key of G major. In total, there are three chords: G chord, C chord and D7 chord.

First of all, let’s look at the G major scale:

Now let’s take a look at the notes in each of the chords:

As you can see, all notes of the G, D7 and C are rooted in the G major scale. Since G is the key of our song, the G major scale can be used to improvise over all three chords. Piano players pay attention! This is how you’ll find the G scale on the keyboard: Play all notes from one “g” note to another and don’t forget to play note “f#,” instead of the “f.”

Guitar players focus! We’re going to show you one way to play the G major scale on the fretboard. The black dots stand for the root note G.

Keep in mind that this is just one way of playing the G major scale. There are many other ways of approaching this key on guitar.

Alright, ukulele players pay attention! Below, you’ll find one way to play the G major scale on the ukulele fretboard.

Like the guitar players, keep in mind that this is just one way of playing the G major scale.

To sum it up: “Silent Night” is a diatonic song, and all chords are related to the key center. So, if you want to improvise over this Xmas track, you must find that center, which in this case is the G major. Long story short: Use the G major scale to show off some cool tunes over the chords of “Silent Night.”

The birth of Silent Night

“Silent Night” is such a classic Christmas song that it makes you forget someone actually wrote it once upon a time. The fun part is that it wasn’t a fancy composer, nor a virtuoso, but just a young Austrian priest who wanted to lighten the hearts of his community. His name was Joseph Mohr, and he moved to Oberndorf in 1817 where he served at the Church of St. Nicholas. Mohr had written the lyrics of “Silent Night” a year prior to his arrival in the village.

In 1818, around the holiday season the Church of St. Nicholas was flooded by the Salzach river and the organ was damaged. Most of the holiday songs are bombastic and full of power that comes from the organ so having a non-functional main instrument was a big deal. To lighten the spirit of his community members Mohr decided to add some tunes to his “Silent Night” lyrics. Since the priest wasn’t a composer, he visited someone who actually wrote music for a living: Franz Xaver Gruber.

Mohr’s assignment was simple: Write a nice guitar accompaniment for these lyrics because our organ is out of order. Gruber did what was asked but also added some extras just in case the organ was repaired. As the story goes, “Silent Night” was a big success during its debut in 1818 and the next year the organ was repaired and fully operational. Organist Karl Mauracher enjoyed playing the tune and took the song back to his hometown of Zillertal. It went viral after two families, known for their troubadour lifestyle, added “Silent Night” to their setlist and started touring Europe. The rest is history. We hope you enjoyed our holiday Songs Explained special. Stay safe, stay at home and keep on jamming!

Check out more cool songs for this season in our Holiday channel or our Chordify Xmas Advent Channel.