The ukulele is one of the most famous and accessible string instruments of our time. From the moment it was brought to Hawaii by Portuguese immigrants to the present day, this cute guitar has the power to make anybody smile. Today we are celebrating this with International Play Your Ukulele Day. 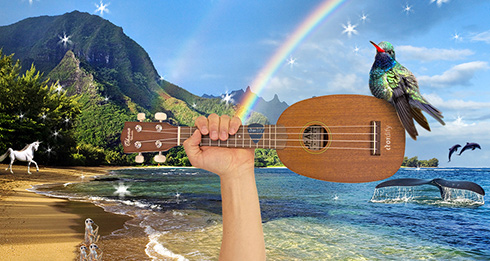 When Manuel Nunes, José do Espírito Santo, and Augusto Dias moored their ship the SS Ravenscrag on the Hawaiian coast in 1879 to cut down some sugar cane, no one could have imagined that this trio would change Western pop music forever.

The local population welcomed the three guys with open arms. In turn, to thank the locals for their warm welcome, the woodworkers from Madeira gave away one of their homemade instruments. This small guitar inspired by the Portuguese cavaquinho is what is now better known as the ukulele. Queen Kalakaua was captivated by the instrument. The cheerful sound and easy handling of the cute guitar made the ukulele very attractive to the queen. That was why she regularly played it during meetings in her palace. Because of this love for the ukulele the instrument became a hit on Hawaii. The name ukulele refers to its cheerful sounds which, according to Kalakaua, resembles a jumping flea: a ukulele.

America under the spell of the ukulele

The “jumping flea” crosses over to America some thirty-six years after its arrival in Hawaii. The Panama Pacific International Exposition in San Francisco marks the breakthrough of the small guitar in the United States. The first ukulele-hype lasts about five years from the exhibition in 1915. During that period the instrument was often used by the composers of Tin Pan Alley–the place in New York where hundreds of musicians wrote pop music on a daily basis. Around 1920, the small guitar disappeared from the mainstream for a while but re-entered the scene again after the Second World War with Arthur Godfrey’s television programme. https://youtu.be/Wee44H4dQ4Q For fifteen minutes, every week, Godfrey uses the television medium to teach his audience how to play the ukulele. As the television itself becomes more and more an accessible device after the war, the popularity of the small guitar is suddenly increasing again as well: the second ukulele-hype is a fact. The plastic version of the guitar, available through TV-pal, saw more than nine million copies of the instrument sold.

The United Kingdom jams along

The jumping flea not only jumps happily around in the United States. Certainly not.  When the British discovered the instrument, a true ukulele fever occurred in 1930. One of the most famous ukulele players of that time was the comedian George Formby. Formby uses the instrument to accompany his songs during shows. One such song that is still seen as an ukulele classic is When I’m Cleaning Windows. It is the gateway song that encourages the general British public to buy a ukulele. https://youtu.be/sfmAeijj5cM After the sixties the little guitar disappears back to the underground again and stays there until crazy hipster Tiny Tim scores the hit Tiptoe Through the Tulips. This gave the ukulele an eccentric stamp and it remained a popular instrument for artists outside the mainstream ever since.

Playing the ukulele is not as difficult to master in comparison to a guitar. Moreover, the instrument is not as expensive as a guitar. The small size makes it easy to bring along on a trip with you, or to friends. That said, it is important to know how to tame the jumping flea, or in other words: there are two accepted tunings for the four strings. https://youtu.be/7xKTKjwGCVg The first one is in the key of D. The strings are tuned in A, D, Fis and B starting from the lowest and working your way up to the highest. The second tuning is in the key of C. Again we work our way from the lower strings up. This means that your strings are tuned in G, C, E and A. Keep in mind that the 4th string (the string closest to your chest when in playing position) is actually the second-highest sounding string, as opposed to a guitar’s sixth string that produces the lowest note on a guitar. An ukulele also includes a variety of accessories that help you make playing even easier. Such as, for example, a tuning device, a sleeve, and a stand. Very similar to what you basically need for a guitar.

During the international Play Your Ukulele Day, we’ll do a shout out to everyone to pick up the little guitar and enjoy jamming along with hits as Somewhere over the Rainbow by Israel Kamakawiwo’ole, or Rise by Eddie Vedder. And there are a few more tracks that you can use to steal the show today, that’s why we’ll list them below. But not before we’ve provided you with three cool trivia about the ukulele that you can tell your audience between the songs. https://youtu.be/32Js2Ef5Ojg Did you know that Beatles’ guitarist George Harrison had a pile of ukuleles in his trunk for years. Just to hand out and jam with random people? Pearl Jam frontman Eddie Vedder even recorded an entire album with the jumping flea! And one of the most famous pop stars of the moment is a very talented ukulele player.. Yes, we are talking about Taylor Swift.

Three tracks to steal the show on your ukulele

Israel Kamakawiwo’ole with the medley Over The Rainbow’ & ‘What A Wonderful World may seem like a challenge, but if you don’t try it, you won’t know if it works for you. With this medley you really have a twofer! Maybe you are in a more melancholic mood? Then play along with Eddie Vedder‘s Rise. This song is of the soundtrack of the motion picture Into the Wild. https://youtu.be/Z26BvHOD_sg If you want to honour the classics, then squeeze your throat and do your best imitation of cult hero Tiny Tim. Tiptoe through the Tulips is for the real ukulele connoisseur. For more inspiration check out our ukelele channel. Enjoy and happy jamming!

Finger Fitness for ukulele
Three ways to tune your ukulele