“I brought my Kala,” Van Mazijk says with a smile when we greet him at a sidewalk café. He points at the little neck that’s sticking out of his backpack. The artist, who lectures philosophy in his day-to-day life, is clearly a big fan of the Hawaiian ukulele.

The album that Van Mazijk records during two weeks of social isolation — right after the Netherlands declared a lockdown — is a collection of beautiful instrumentals. All songs are recorded with a ukulele and on each track, we hear his exquisite skills.

“I wanted to convey the atmosphere of the place,” says Van Mazijk. That’s why he decided to record surrounding noises, like bird song and the whistling of the wind. Were the “COVID-19 Recordings” planned? The musician shrugs. “I didn’t expect this to be the end result.” And what is the result?

He smiles momentarily. “They are all intimate paintings, snippets of moments that I spent on my own.” He tells us that on some days it was too cold to record outside; so, he would he would warm up his hands inside after recording for a few minutes. 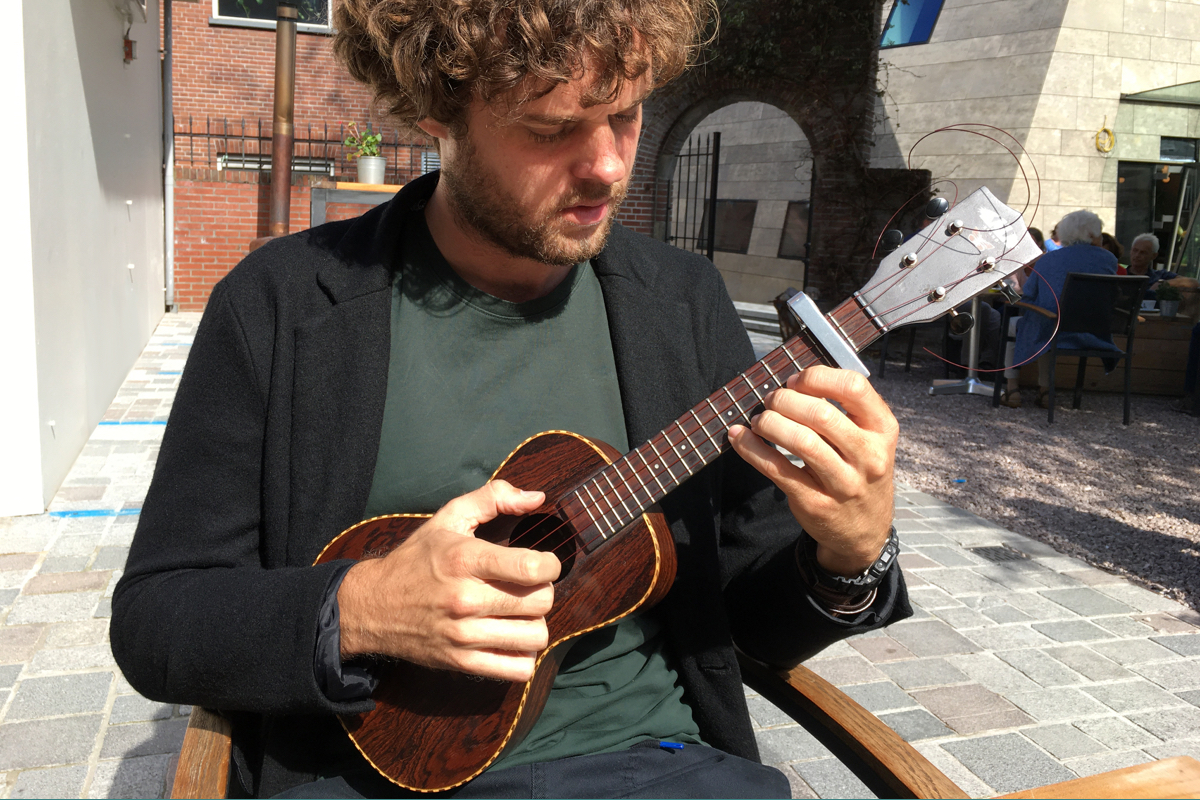 Van Mazijk has a soft spot for string instruments, like the ukulele. According to him, this little guitar is highly underrated. “People view it as an instrument for beginners,” he sighs. “That’s why they don’t take it seriously.” But, according to Van Mazijk, the warm sound of the wood in combination with the high notes of the ukulele is fantastic.

One of the techniques he uses is the so-called clawhammer. This playing style comes from the banjo. “There are two ways of playing the banjo,” Van Mazijk explains. “The first — the clawhammer — dates back to before the twentieth century; the second became popular after that and, when you hear it, you will directly associate it with hillbilly music.”

For a little while it’s silent. Then Van Mazijk places his right hand close to the instrument’s bridge. We wait, excited, and watch how he starts plucking the strings of his instrument as if he were a bassist. His blunt movements seem disparate from the subtle sounds coming of the strings — so, this is the clawhammer.

After having played a few melodies, Van Mazijk puts his instrument aside. “You’re meant to pluck the strings with your thumb, while using your other fingers for strumming; that’s how you get that tight sound.”

For the clawhammer technique you need special strings. The standard nylon strings with which most ukuleles are fitted don’t sound as good as the ones Van Mazijk uses. “I play the Aquila Red Series,” he says. “Those are firmer, and they probably contain some sort of metal.”

The difference with “normal” strings? Van Mazijk takes a moment, fingers a few chords involuntarily, and nods: “These strings are firmer but not a lot thicker. The sound is clear and crisp, especially when you apply the clawhammer technique. That’s the biggest advantage. Nylon sounds duller.”

One of Van Mazijk’s inspirations for using the clawhammer technique is Cathy Fink. This experienced banjo player has two Grammys to her name and stars in multiple YouTube tutorials about banjo playing styles. Moreover, she also talks about the ukulele and applies banjo techniques to that instrument.

“When I saw that, I was impressed. And it also inspired me,” says Van Mazijk. He started practicing the clawhammer daily. “It took a while before I could execute it flawlessly. It’s a matter of doing it a lot and practicing your motor skills.”

Tip and tricks for ukulele

During our conversation, Van Mazijk constantly shares little tips and tricks about playing. Therefore, we ask him to sum up the most important ones. What are things that, regardless of skill level, you should know? He thinks and, with a smile, says, “Good question …” After fingering a chord on his Kala, he presents his list. “First of all, you should know how to hold a ukulele, as I already explained. Secondly, you should have your strings in order, but we’ve already talked about that too. Another, third, important thing is that you should let go of chord diagrams. Don’t try to remember everything, just play. Especially for guitarists it can be confusing to learn all the chord fingerings anew. The ukulele has an open tuning, so you can do a lot that sounds nice without knowing exactly what the chords or notes are. This really opens up your creativity. Lastly, a lot of practice.”

Before we finish up our conversation, we want to know why he chose the Kala ukulele? Is it the price, its size, the wood, or was it an esthetic choice? “If you’re playing ukulele, you want a real Hawaiian, preferably one made from koa wood. That will give you the perfect warm sound.”

Laughing, Van Mazijk explains that his Kala is made from ziricote, another type of Hawaiian wood. “This one produces a slightly different sound than koa. It really depends on your preference and what you’re looking for. Moreover, I recommend everyone to watch the YouTube video about good ukuleles for under $200. A good instrument shouldn’t have to be expensive. Do you have any other questions?” No not at all, we have more than enough info! Thank you. “Thank you.”

Inspired? Check out these songs to improve your ukulele skills. Happy jamming!