The Super Bowl halftime show is one of the most legendary live performances of the year. This time the honor went to The Weeknd, who mesmerized the audience with an amazing ten-minute show. The costs, around 7 million dollars, came out of his own pocket. Eager to find the chords for Weeknd tracks? We’ve got you covered!

Every first Sunday of February is marked by the NFL’s Super Bowl. At halftime there’s always an awesome show that links the sport to pop culture, also known as the “Pepsi Super Bowl LV Halftime Show.” Many great artists have stood on that stage, like Bruce Springsteen, Madonna, Jennifer Lopez, Shakira, Michael Jackson, Beyoncé, and the list goes on. 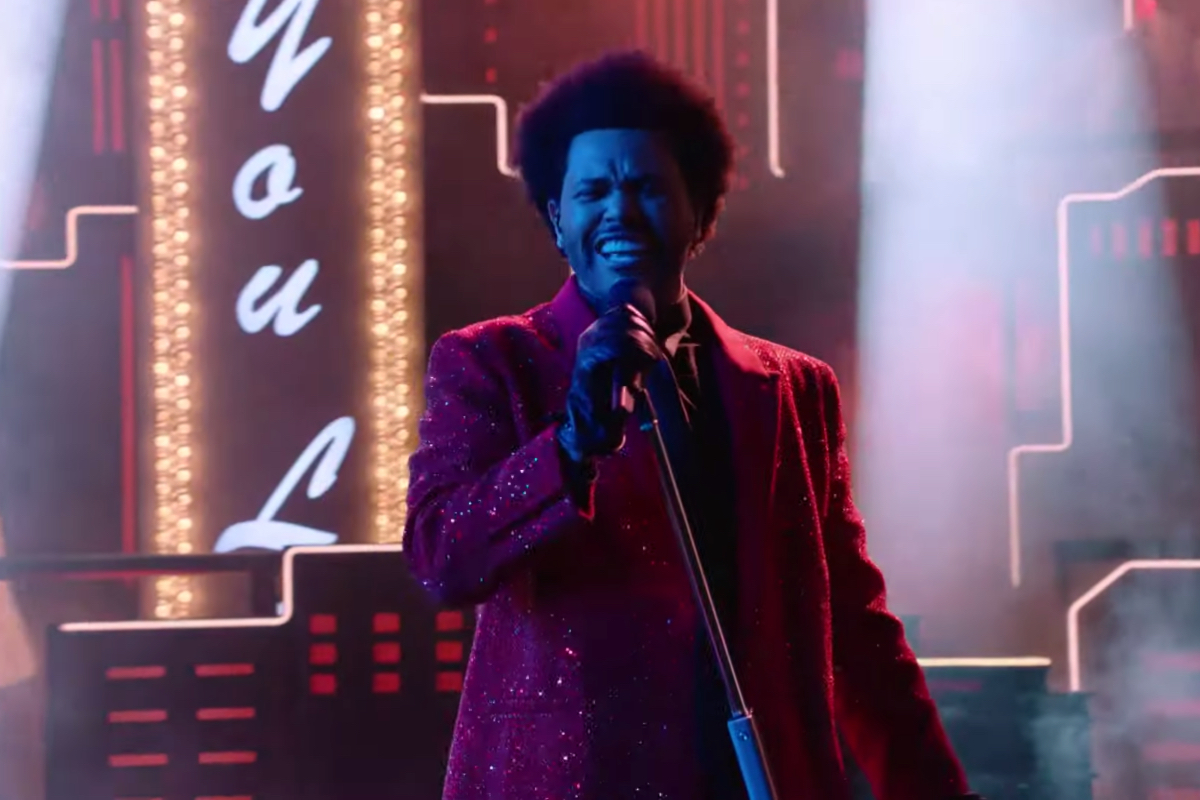 This year the man, the myth, The Weeknd made his appearance in Raymond James Stadium in Tampa, Florida. During ten minutes of awesome choreography, special effects and fireworks the audience were treated to a mélange of the artist’s greatest hits. Below, you’ll find a list of the tracks The Weeknd performed. So you can jam along.

The artist started off with his Daft Punk collaboration track “Starboy.” The Weeknd’s chords of “Starboy” aren’t that difficult. The song is built up from basic triads, like the Am chord, the F chord, the C chord, and the G chord.

The chords for “The Hills” by The Weeknd are a bit trickier, but still very doable. Just listen carefully to the track and use our Loop feature to repeat verses, choruses, and other parts that you would like to practice.

Three basic triads are all you need to play along with “Can’t Feel My Face” by The Weeknd. If you know how to play an Am chord, an F chord, and a G chord, you’re ready to go. Even though the chords are easy, you’ll still have to get the hang of the vocal part.

‘I Feel It Coming’

The Weeknd chords for “I Feel It Coming” can feel unnatural. If you’re a beginner, we suggest you transpose the song to the key of G. This will make the chords a little bit more familiar. Try it out!

The “Save Your Tears” chords are a beginner’s paradise. The basic triads are a great way to show off some skills, even though you’ve just started playing your instrument. The only chord that could give you some trouble is the F chord for guitar players, and the Em for the ukulele rascals. That being said, it’s just a matter of practice. What are you waiting for? Grab your uke and start jamming!

The chords for “Earned It” by the Weeknd are awesome for honing those basic triad skills. Written in the key of Dm the song has a nice melancholic touch. The barre chords might be a challenge for beginner guitarists, but for intermediate and pro players this track is a walk in the park. The big question is… How will “Earned It” sound on your ukulele? Yeah, think about that for a while, and then just do it.

As his time runs out, at the Pepsi Super Bowl LV Halftime Show, The Weeknd throws in a new flavor in the form of “House of Balloons / Glass Table Girls”. Jamming along with this gem is something for the intermediate and pro players. That being said, it never hurts to try out some of harder stuff as a beginner. What doesn’t break you makes you stronger.

The show ends with a bang. Yeah, literally. Under the sparkles of fireworks, The Weeknd wraps up his performance with the hit song “Blinding Lights”. Chords can be nasty little things, but when you’re dealing with just a few, it’s worth the jam. No wonder the artist chose to play this song at the apex of his halftime show. Try it out and happy jamming!

Super Mario vs Teo on the ukulele, a personal story
Monster jam setlist for the ultimate summer vibes