Always wondered why the chord progressions of “All Along the Watchtower” by Hendrix or songs like “The Unforgiven II” by Metallica are filled with so many flat and sharp chords? We’re going to let you in on a little secret. Artists like Metallica, The Detroit Cobras, Nirvana, and many more often use the so-called Eb tuning. Better known as the Jimi Hendrix tuning.

Rock bands and grunge artists adopted the Eb tuning for a couple of reasons. For starters, almost every rocker wants to sound like the master himself, Jimi Hendrix. Second of all, a lower tuning has a fuller and rawer sound; which is good when you want to make music that’s dark and heavy.

Let’s take a closer look at this tuning. It’s actually not that difficult compared to the open G tuning or Dsus4 tuning. The only thing you have to do is tune your strings down a half tone. Jimi Hendrix was one of the first mainstream guitarists to use this tuning. That is why it’s named after him.

The Eb tuning transforms your sixth string (the lower E string) in an Eb. The A turns into Ab. And your D string transforms into a Db. The third, second and first string (G, B, e) are also flattened, turning them into Gb, Bb and eb. 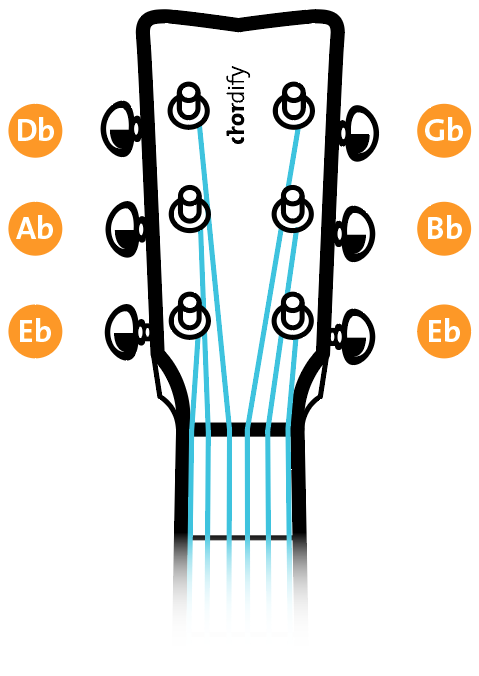 How to use Chordify in Eb tuning

Before we take a look at some well-known songs written in Eb, it’s important to explain how to use Chordify if you come across a track that uses the Jimi Hendrix tuning. As you’ll see in a bit, the chords can look a bit weird at first sight.

You hear a song that sounds like it should be pretty easy, but Chordify shows you all these flattened and sharpened chords. What do you do? Well, just take a look at the transpose tool on the right side next to the play button. If you hit the arrow up, you transpose the chord progression with a semitone. So, if we translate this to a guitar, you just tune your guitar higher.

“But aren’t we tuning our instrument down with Eb?!” Yeah, you’re absolutely right! But Chordify calculates the chords in such a way that you can play a song in standard tuning. If you’ve tuned your guitar to Eb, you’ll want to use the same basic chord shapes as in standard tuning, for example a G chord or an Em chord. That is why you’ll have to use the transpose tool to alter the chord progression as it’s shown in the Chordify player. Makes sense, right?

You know what time it is? Time for action! There are so many songs written in the Eb tuning; we could fill a whole book with them. But let’s not get too crazy about it and check out a few tracks that you can import directly into your Jimi Hendrix tuning setlist.

For example, check out the chords to “1979” by The Smashing Pumpkins. The track was voted best track of the band in 2012, and it’s all about frontman Billy Corgan’s youth. The overall vibe is pretty melancholic, a perfect match with the heavy Eb tuning.

Another song that uses guitars tuned down a half step is “Valerie” by Amy Winehouse (which is actually a Zutons cover). The track has a nice upbeat and uses seven chords in total. Not very difficult to learn and a nice addition to your list of jams.

We’ve already mentioned the master himself, who wrote all his songs in the Eb tuning. If you want to practice some basic chords, just jam along to the chord progression of “The Wind Cries Mary” by Jimi Hendrix. It’s a pretty simple song with a lot of depth in the lyrics. A good track to play by the fireplace.

Here’s some food for thought: if you want to sound heavy and melancholic, it’s wise to tune your instrument lower than standard tuning. This doesn’t mean that the Eb tuning is the only option. You can go down as long as your strings can keep producing a clear sound. As long as you apply the same intervals between them, you can use basic chord figures.