In the “Songs explained” series we dive a little deeper into tracks that are popular in our Chordify community. This is the place where we’ll look at a song from beginning to end. This time we focus on “Everything I Wanted” by Billie Eilish and the four guitar chords of its composition: Dmaj7, E, C#m, C#7.

It doesn’t matter if you’re a skilled guitar player or someone who has just picked up the axe a week ago. Our explanation works for everyone, and that’s a promise. If you want to learn “Everything I Wanted” by Billie Eilish, we provide guiding with tabs, chords, video tutorials, and background information. Time to grab your guitar and start playing!

In general, the song consists of three chords: Dmaj7, E and C#m. To get a better understanding of the track, we divide it into the following parts: intro, interlude, verse, and chorus. This way we won’t get lost. It will also help us to understand why at certain moments a C#m chord becomes a C#7 chord.

Check out the picture below. This helps you navigate the song when you start to play and add the lyrics.

The song structure of “Everything I Wanted” looks as follows: 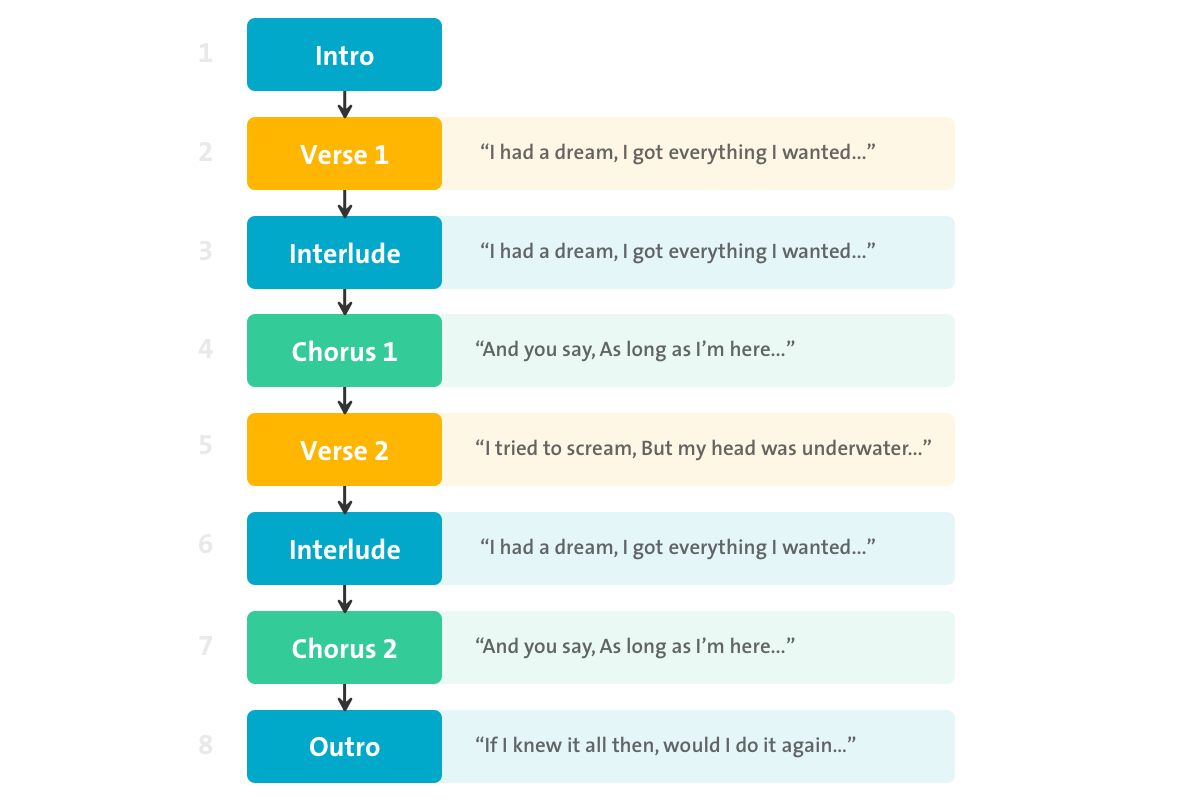 You might feel a bit overwhelmed by looking at this structure, but there’s no need for that. It may seem like the song has lots of parts, but, like we said before, it all comes down to the chords Dmaj7, E, and C#m. Actually, many of the parts of the song are based on repetitions of that cycle.

Why create this big structure when it all revolves around three chords? The easy answer is that every part sounds a bit different due to variations in singing and playing styles. For instance, at the end of each interlude, Eilish sings very intimately accompanied only by piano ­— and in our case the guitar.

Moreover, at the end of the second interlude, Billie whispers. This creates a contrast with the chorus, which has an intense and full sound. In the first and second chorus the C#m is replaced by a C#7 chord. Now, before we get into more details, it’s time to choose a skill level so you can get the most out of this article.

So, you just picked up a guitar and want to learn how to play “Everything I Wanted” by Billie Eilish? Cool! This beginner level is for you. If you’re a bit more advanced, feel free to skip ahead to “Intermediate level” [anchor link] or “Pro level.” [anchor link]. Alright, that being said, let’s get started.

It’s good to know that two of the three chords in this song are triads, also known as open chords. We assume that you already know how to play open chords on guitar. Since this is the beginner level we’ve simplified the original chords. This way you can play your favorite track without being a pro. By doing so, these are the triads we end up with: D, E, C#m, and C# for the chorus. Check out these simple chord diagrams below.

Intro, interlude, and verse of ‘Everything I Wanted’

To make your jam nice and pleasant, we’ve made up some guidelines to help you out. Remember that we said this track has different parts, or cycles? Well here they come. This chord progression below is the cycle that repeats over and over again when you play the intro, the verses and the interludes. 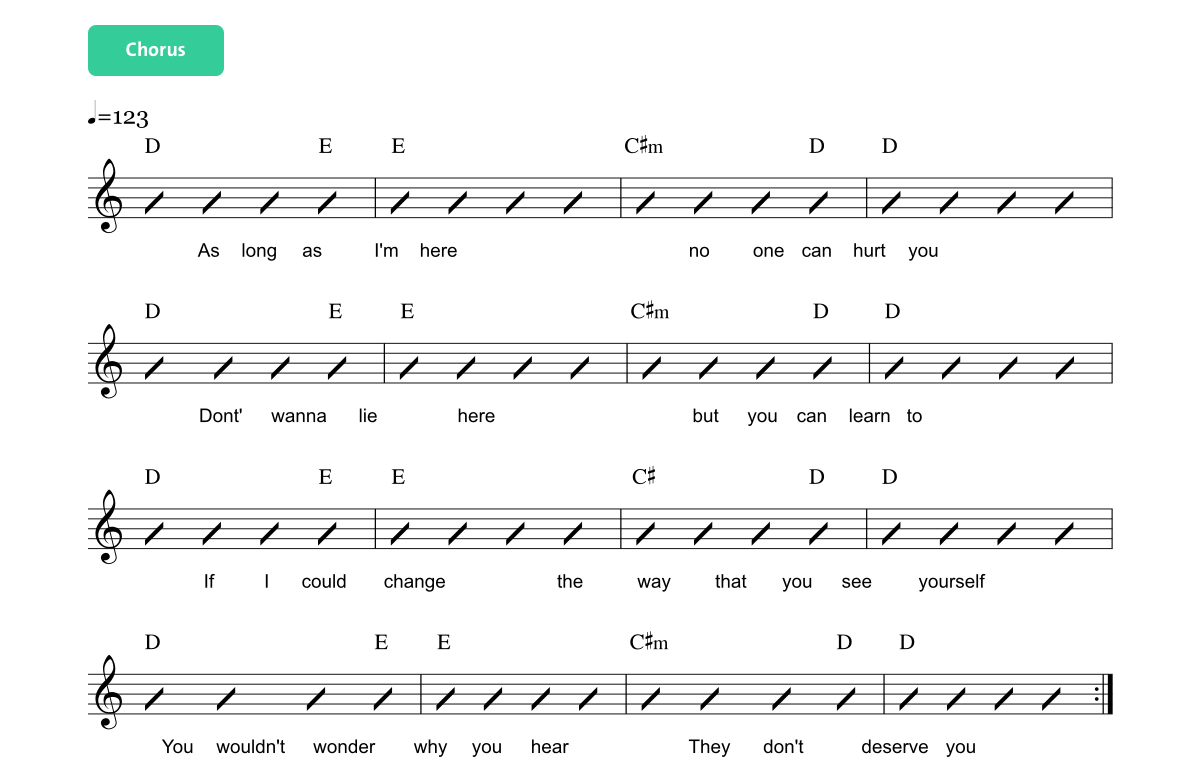 Remember to stay sharp, just like the C in this part. Yeah, we’re referring to the C#m changing into a C#. This happens in the third line of the chorus (as you can see above).

Congratulations are in place. You just got through the entire song. Time to grab your axe and start playing the whole song. Below, you’ll see the chord progression and the lyrics. Enjoy!

Tip: If you want to get closer to the sound of the original, you’ll need to play all the notes of the triad at the same time.

Let us guess, you want to sound just like the Billie Eilish track. Great! Let’s make that happen, shall we? We just need to turn the D triad and C# triad from the beginner version into a Dmaj7 and a C#7. The other chords, E and C#m, remain the same.

Here are the chord diagrams for guitar. Don’t forget to check the tutorial video on how to play the intro, verses, and interludes.

Intro, interlude, and verse of ‘Everything I Wanted’

We’ve made a nice representation of the chord progression that is characteristic for the cycle of the intro, verses and interludes. And they all start with these lyrics: “I had a dream, I got everything I wanted…”

You’ll find the chord progression for the chorus below. Every chorus starts with this line: “And you say, as long as I’m here…” The video below shows you how to play the chorus on piano.

You made it! If you followed all the steps, mastered the chords, and watched the video tutorials, you are ready to play the whole song. Below, you’ll see the chord progression and the lyrics. Enjoy!

Hello, you pro player you! Eager to play this song as if you are Billie Eilish? Good, let’s make that happen. So, let’s play the chords together with the melody, just like on the track. We’ll start off with the background melody, which is also repeated over and over again during the song. This is what the tabs look like for guitar. 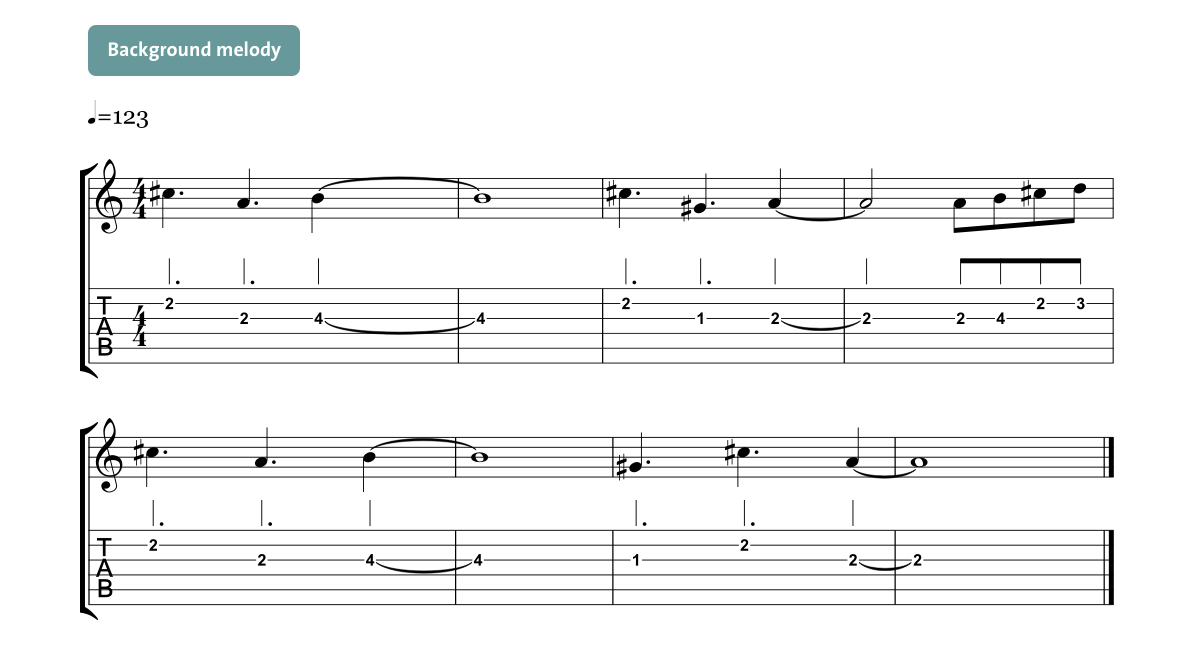 It’s not easy to combine the chords with the melody on your guitar, but with a bit of practice it’s doable. That is why you have to choose comfortable chord shapes like the ones below.

Are you ready to play the whole thing? Let’s go! Here are the notes and tabs for guitar of the intro, verse and interlude. 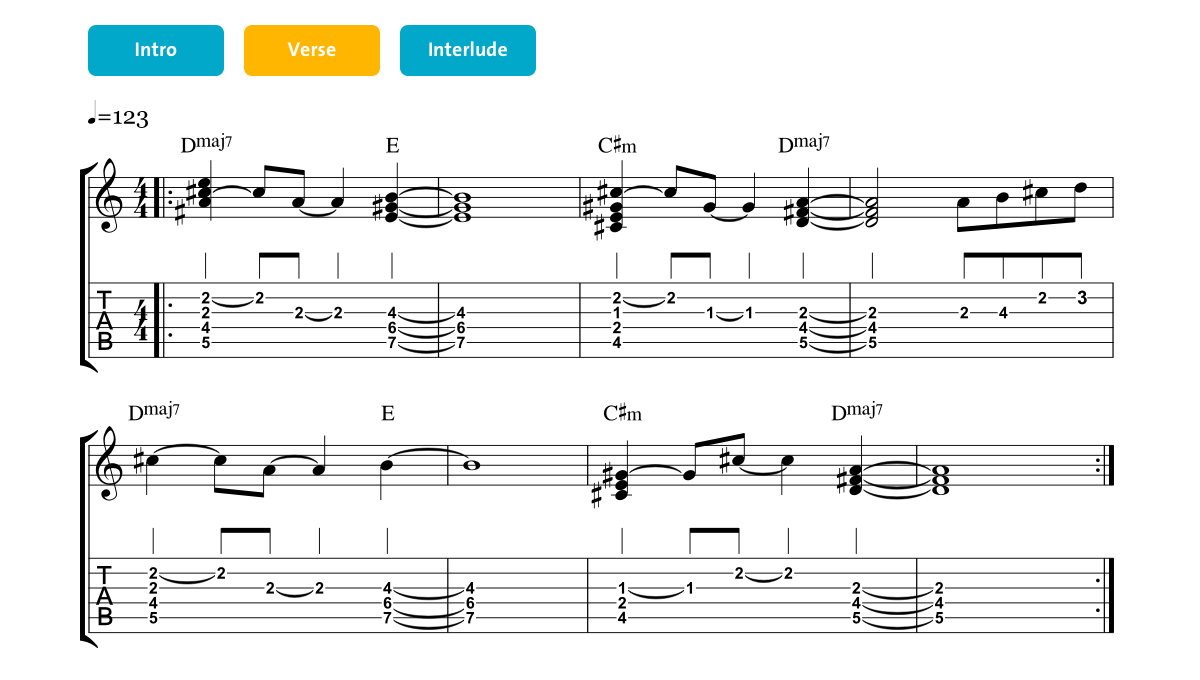 Did you take a look at the video tutorial above? If not, check that one out first. After you’ve done so, it’s time to play the chorus. Here’s what that part looks like. 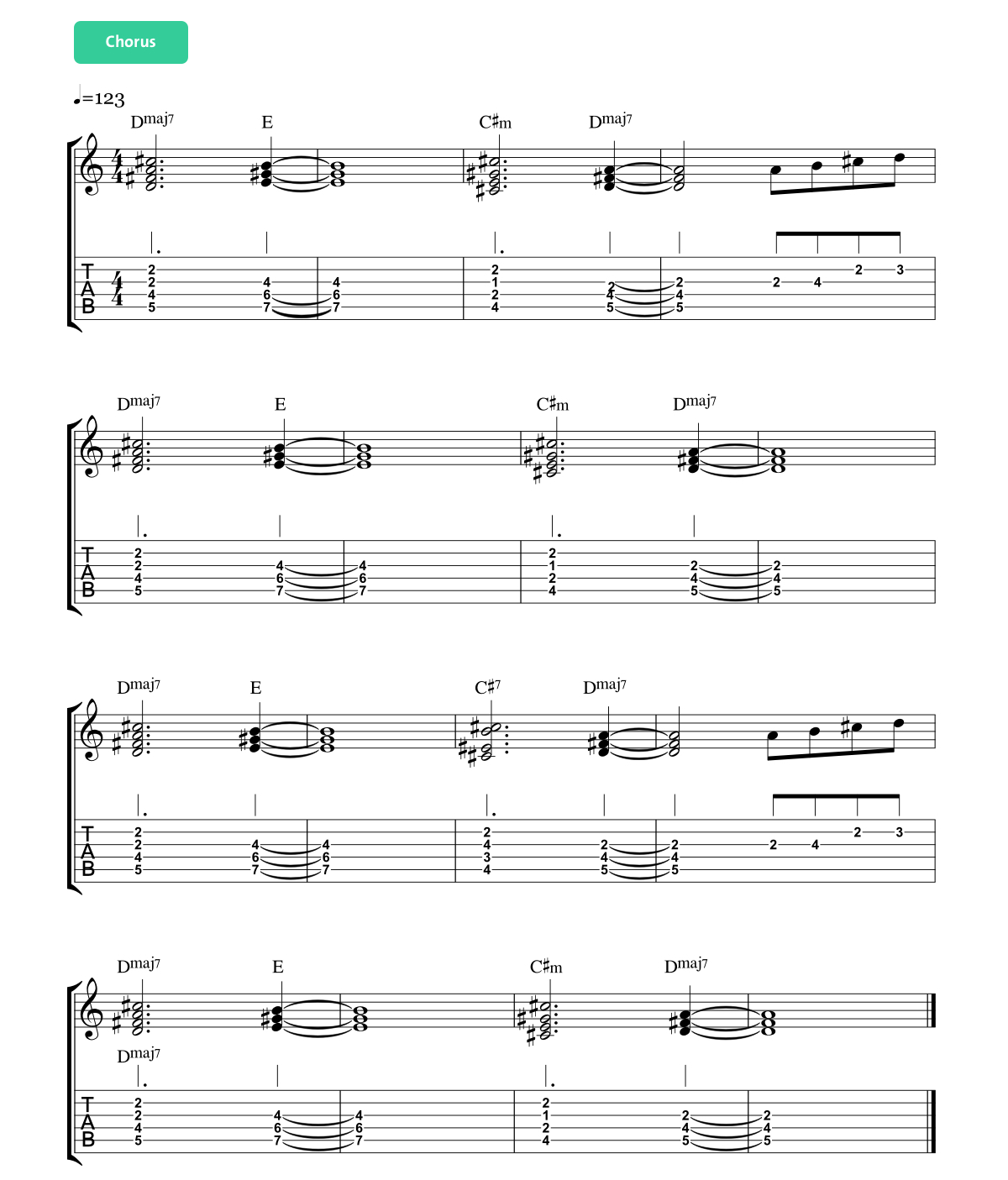 We covered most of the song now. The only thing left is the outro. Yeah, that’s the part in where Billie sings, “If I knew it all then…” Don’t worry, there’s nothing new here, this part is basically the chorus. So, just keep jamming the same chord progression until the end.

If you want the chords and lyrics for the pro part, we have some news for you. They are the same as the chord progressions of the intermediate level, so go and check that out. Only this time, try and incorporate the licks and melodies you’ve just learned. Have fun!

And here comes your favorite part. Yup, it’s time to dive into some music theory! As you can see, every cycle of the song starts and ends with a D major chord. To be more precise, with a D major seven chord: Dmaj7. It makes sense to think that this is the main chord of the song, and, therefore, that it’s written in the key of D.

But, what if we tell you that you can play the A major scale over this song? “Say what?!” Yeah, minds blown, right? Let’s take a look at what’s happening here by examining the A major scale: A, B, C#, D, E, F#, G#, A. It’s hard to miss where the D-E-C# chord progression comes from.

If you zoom in on the D triad (D, F#, A), the Dmaj7 (D, F#, A, C#), the E triad (E, G#, B) and the C# minor triad (C#, E, G#), you’ll notice that the notes of these chords can all be found in the A major scale. This means that even if every cycle in “Everything I Wanted” by Billie Eilish starts and ends with Dmaj7, the scale you can use to improvise and jam is the A major scale. Try it out and thank us later!

What is the pulsing sound in this track?

Nerd alert! If you are interested in finding out how Finneas O’Connell produced this track, we might have a little insight. If you couldn’t care less, just stop reading and start jamming… So, you want to know what this pulsing sound is that dominates the track? Read on.

Listening to the piano part of the song it almost sounds as if someone is frolicking with the volume. This effect is achieved by a sidechain compressor. Normally, a compressor makes the instruments sound tight and, yes, compressed. But when you use sidechaining, a compressor is triggered by another instrument. In this case it’s the kick drum. When the kick drum is audible, the background music is turned down. This technique is also common in house and techno productions.

We hope you enjoyed learning how to play “Everything I Wanted” by Grammy winner Billie Eilish. Happy jamming! 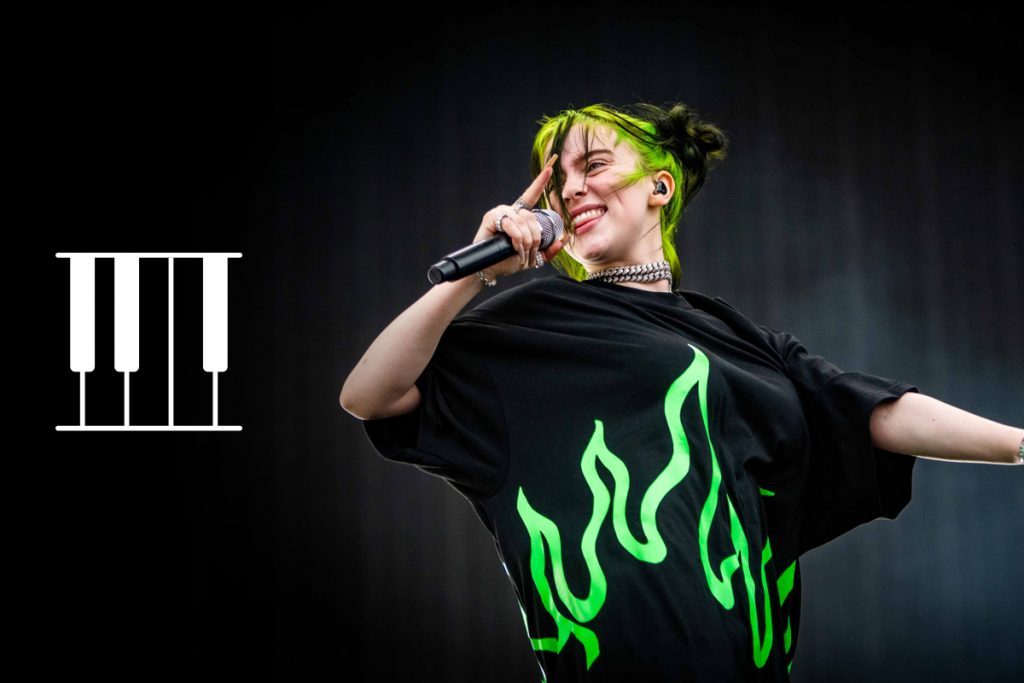 Billie Eilish – ‘Everything I Wanted’ piano chords and sheet music 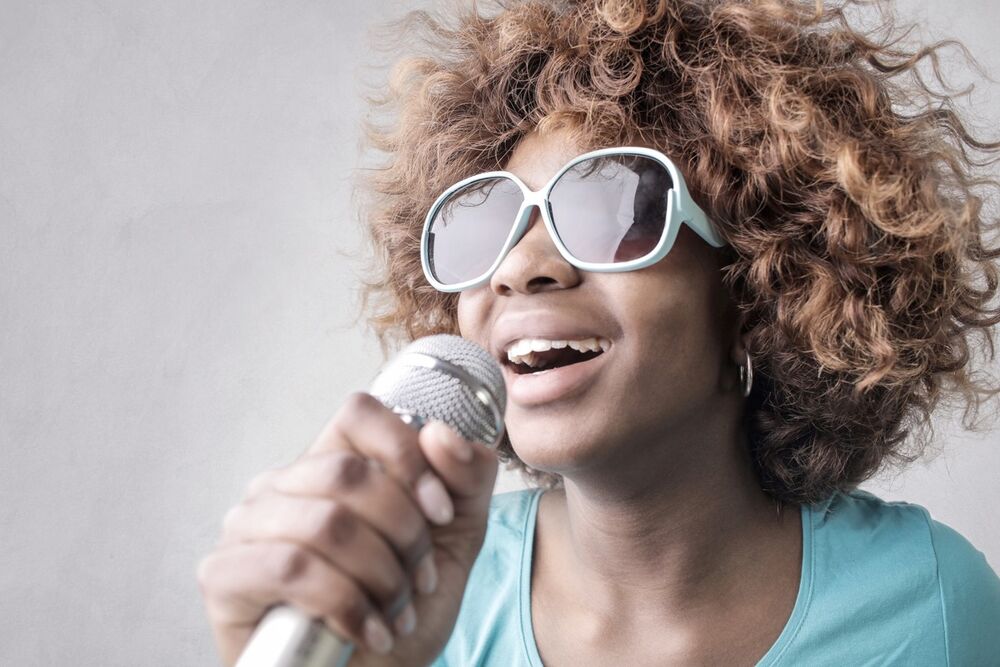 Sing along with the lyrics of some of your favorite songs