How can some bands, like Nirvana, Rage Against The Machine, or Van Halen create a sound that is so different? The answer is simple: just tune your guitar differently. “But, but how?” That’s what we’ll talk about in this blog.

Alternate guitar tunings can infuse your sound with a distinct color, vibe, kick, or whatever you’d like to call it. One thing’s for sure: there are different flavors out there, and not everything revolves around the standard E-A-D-G-B-E tuning. That is why we’ll explain the drop D tuning in this blog. 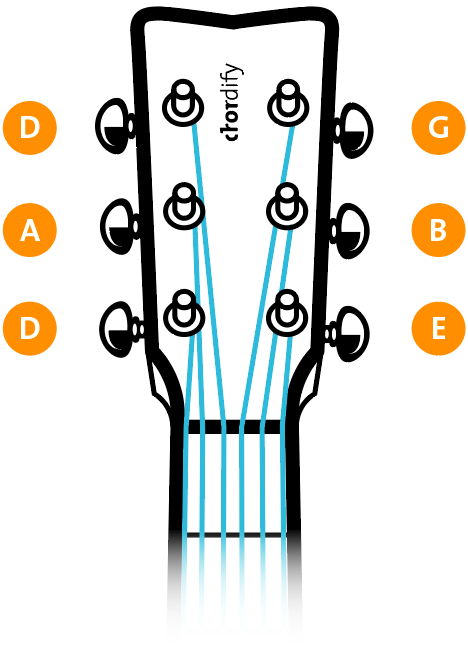 We speak of drop D when you tune your sixth string – the lower E – down a whole note, so make it a D. This is common in alternative genres like metal, grunge, and punk; but has its origins in blues and classical music.

Playing in drop D has some advantages over playing in standard tuning. One of them is that you get a lower and fuller sound. Which is why it’s popular with dark and melancholic genres.

One of the most important reasons that punks like playing in this tuning, is that it makes playing a lot easier. When you’re hitting the lowest three strings, you automatically capture a harmony that we also know as a power chord. So playing the first three strings open gives you a D5.

Lay down your finger flat on the second fret and then hit the first three strings; that’s an E5, or in other words an E power chord. You can use your flat finger and move it all the way up the neck of your guitar to play every chord you want; all you need to know is which chord is under which fret. Note that the E string is now a D string, so the power chords in order are: D, D#, E, F ,F# ,G ,G# ,A ,A# ,B ,C ,C# ,D.

A little bit of music theory

It’s time for a little bit of music theory. When you’re talking about chords it’s all about intervals, which are the relations between the tones. In other words: you can turn a drop D tuning into a drop C# tuning if you tune all strings down a semitone; and then the lower E down another whole step. The intervals stay the same.

So, the essence of tuning your guitar in drop D is not that your guitar is now tuned in D, but rather that the lowest string is one full tone lower than the rest of all the strings, that all maintain the same interval as in standard tuning. This way you can tune your guitar as high or low as you want, and still play it the same – with the “flat finger method.”

So, your lowest string is tuned down a full tone. What now? Now the fun part starts. Can you guess what it is? Playing along with some cool tracks of course! We selected a few songs for you, so you can put you new skills to the test.

One famous grungy example of a drop D song is “Heart-Shaped Box” by Nirvana. Moreover, it’s impossible to ignore Van Halen’s “Unchained” when speaking of drop D. And last but not least, the most famous track in drop D must be “Killing in the Name” by Rage Against The Machine.”

How do you use Chordify with drop D tuning?

You probably already noticed that, when opening the above-mentioned songs, the chord diagrams shown in Chordify don’t match those of your drop D guitar anymore. That’s right! Because your E string is now a D string. So, what to do?

Do you remember that you can play chords in drop D by laying your finger flat on the three lowest strings? So now, it’s a matter of looking at what chord is shown on Chordify, and finding the corresponding root note on your lowest string. Try it out yourself, happy jamming!