Did you know the classic “Sweet Home Alabama” by Lynyrd Skynyrd is based on just three chords? Isn’t that amazing? Hi there, ukulele players, and welcome to another edition of our “Songs Explained” series. In this article you’ll find all the chords and lyrics to help you out with learning how to play this evergreen. Note: If you are looking for a “Sweet Home Alabama” tutorial for piano or the Songs Explained for guitar, check out our articles for both instruments.

This blog post is dedicated to explaining all you need to know about Lynyrd Skynyrd’s “Sweet Home Alabama” for ukulele, and more. Once you’re done reading this article, you’ll know the chords, the lyrics, the music theory, and to whom Ronnie van Zant refers when singing about “the Swampers.” Ready? Let’s go!

The structure of “Sweet Home Alabama” is the first thing that we’re going to check out. As you can see in the figures below, the track consists of 14 parts. That may seem like a lot, but don’t sweat it. First let’s take a look at the actual structure; after that we’ve got some good news. 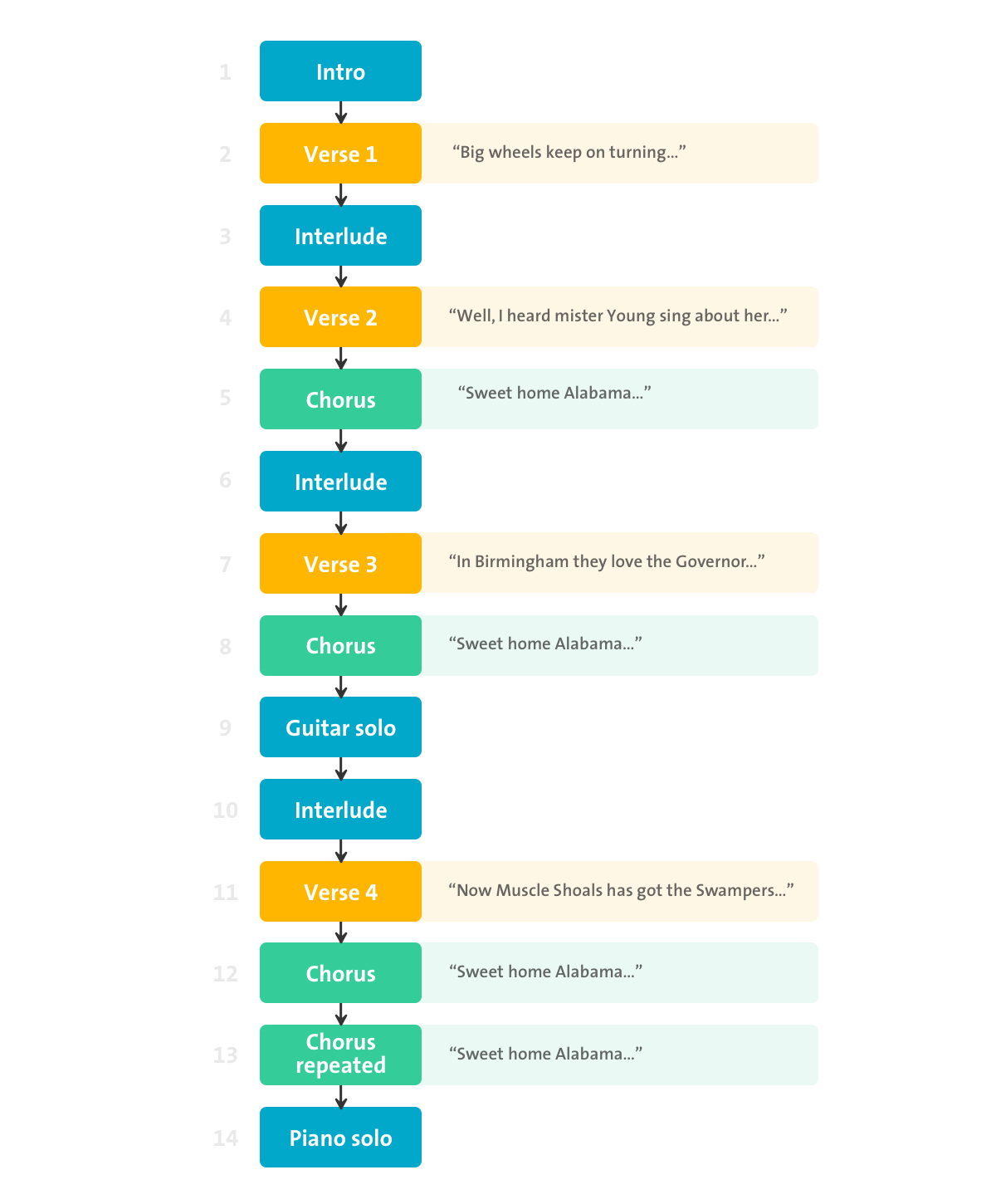 Yup, this song has lots of parts. But there’s good news. “Sweet Home Alabama” may seem like a very long track, but the harmonical core is just a three-chord sequence. That’s all there is to it, we promise. These three chords are repeated over and over again. By doing so Lynyrd Skynyrd is laying down a fundamental structure on which other instruments can improvise, solo and create a colorful track. Below, you’ll find the chord progression we’re talking about.

We know what you’re thinking, “So I need only these three chords for the intro, all interludes, all verses, all choruses and all solos?” Well, you’re almost right. The only part where Lynyrd Skynyrd does some harmonic extensions is in the chorus. We’ll explain later what we mean by a “harmonic extension.” Here’s a heads-up though: From here on, we are splitting up this article into levels. This way we can explain the song better according to your skills. All righty, let’s dive in.

So, you’re a beginning ukulele player. Great! Or, you’re someone who’s been jamming for a while but you just want to take it slow. You’re also at the right place. In this part we’re going to walk you through “Sweet Home Alabama” by Lynyrd Skynyrd.

Playing this track is useful in many ways. First of all, it’s a cool song. But when we look at it from an educational perspective there’s also a lot you can learn from it. Playing this track will help you master some basic chords, improve your skills, and skyrocket your feeling for rhythm.

We’re going to kick this journey off by taking a closer look at the intro, verses, interludes and solos. All these parts have the same chord sequence consisting of D, C and G.

The only difference is the amount of times this chord sequence repeats. To help you out with the duration of the parts, we just wrote down how many times you have to play each part.

Here is the chord progression for the intro.

Here is the chord progression for the verse.

Here is the chord progression for the interlude.

Here is the chord progression for both solos.

This all looks pretty doable, right? Cool. Remember that the chorus was a bit different from the rest of the song parts? Let’s check that out. It’s still based on our familiar chords from the picture above, the only differences are the variations at the end of the sequence.

Let’s see where those variations come from in the chorus, since they are based on our familiar chord sequence from Figure 1.

As you can see the chorus contains an F chord, which Lynyrd Skynyrd plays at the very end.

Here are the chord progressions for the chorus. 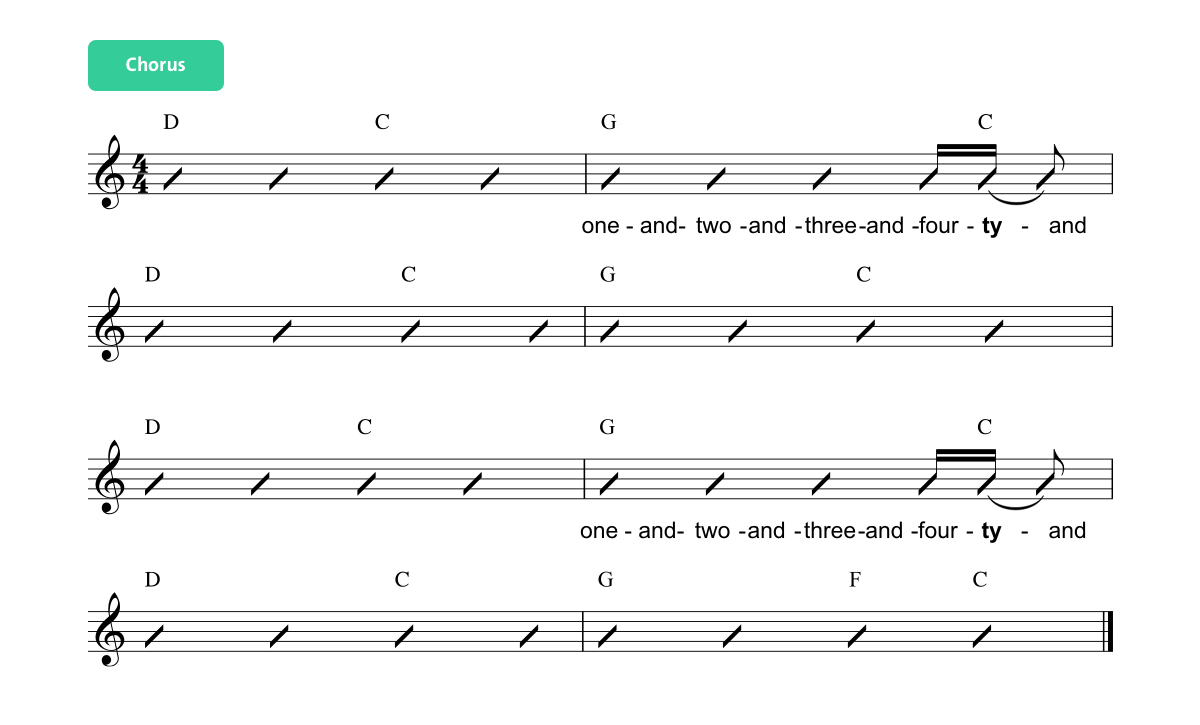 Take a closer look at the end of the first and third lines. The C chord comes at the end of the bar as a syncopated accent on the sixteenth note. To help you time this syncopated C, we’ve added a metric pulse. At the fourth beat we added the word “four – ty” instead of “four” — it’s not a typo! This syllable, “-ty,” will help you play the C chord at the right spot. This is a great way of training your sense of rhythm.

Okay, you know what time it is? Well, guess … Yeah, it’s time to pick up that uke and start jamming. Below, you’ll find all parts, chords, and some lyrics, to get you on your way to the South. 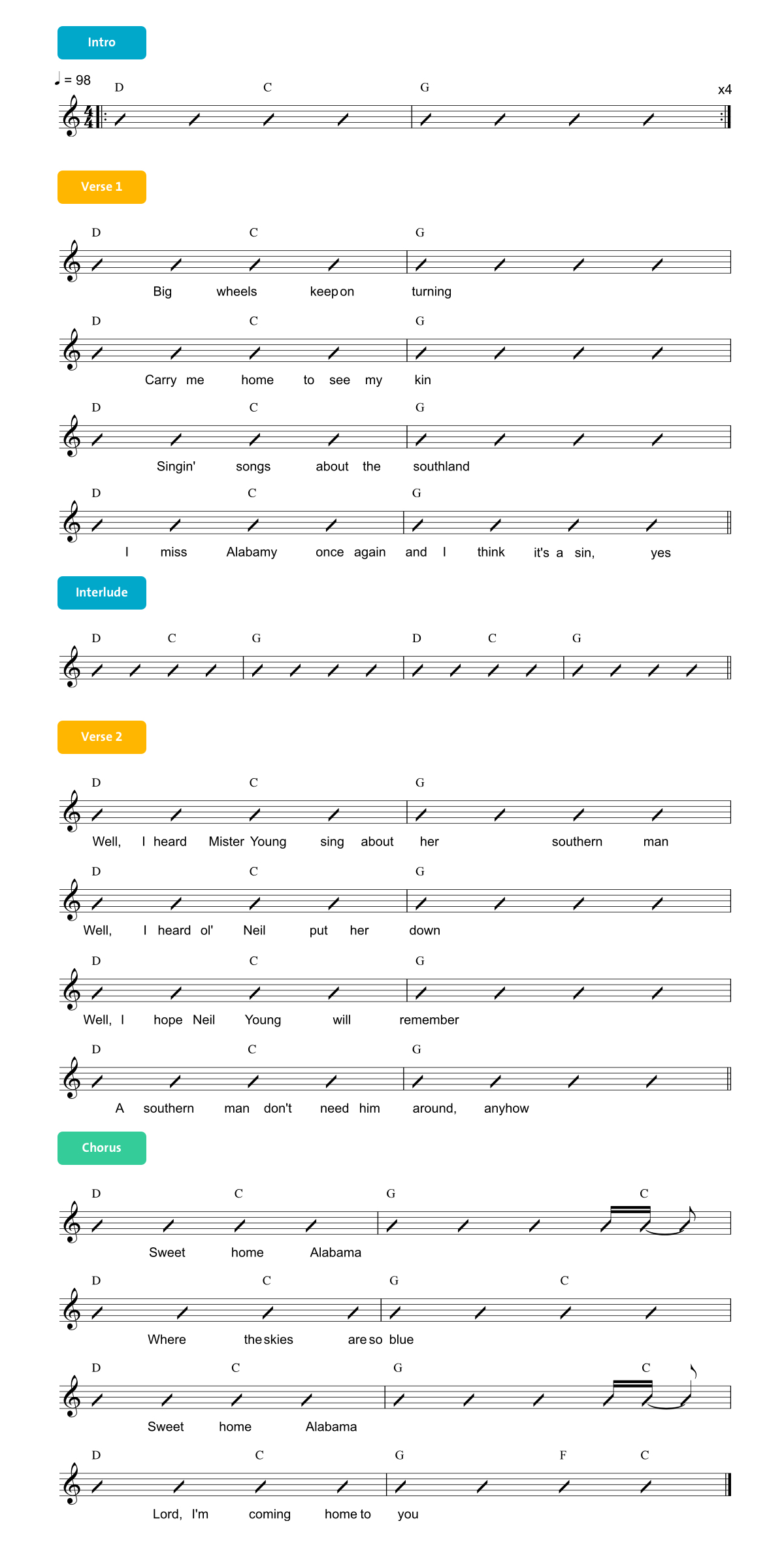 Howdy partner! Welcome to the “Sweet Home Alabama” “Songs Explained” series for the advanced ukulele player. The good news is that you’re going to learn a lot from this blog post. We’re going to show you the chords for the song, tips and tricks on how you can improvise a solo on top of the chord progression, and, last but not least, we’ll provide the lyrics to this classic by Lynyrd Skynyrd. Let’s get this party started, shall we?

Let’s start with the following parts: intro, verses, interludes and solos. All these parts are based on one sequence: D, C and G. To be more precise: D, Cadd9 and G. The only difference is how many times this chord sequence is repeated. To make it easier we’ve mapped it out in Figure 4 below. First, check out the chord diagrams, though.

Don’t be surprised seeing the C(add9) chord. “Add9” means that we added the second note of C major scale (which is D). “Wait. You said second, but in the chord is says 9.” Well observed, indeed. This is because we add a note by going up one octave. There are seven notes in an octave, right? Therefore, we need to do a plus seven to every note we want to add. So, if we want to add D, which is the second note, we have to calculate two plus seven. Yup that’s nine, and that’s we say: Add9.

Here is the chord progression for the intro.

Here is the chord progression for the verse.

Here is the chord progression for the interlude.

Here is the chord progression for both guitar and piano solos.

Now it’s time to see how the chorus is built up. In this part the chord progression is a bit different than the rest of the song. It’s still based on the original chord sequence, but it has different variations at the end.

Check out the chords of the chorus first, and try to get used to them. In Figure 5, below, we’ll show you how these chords are applied in “Sweet Home Alabama.” 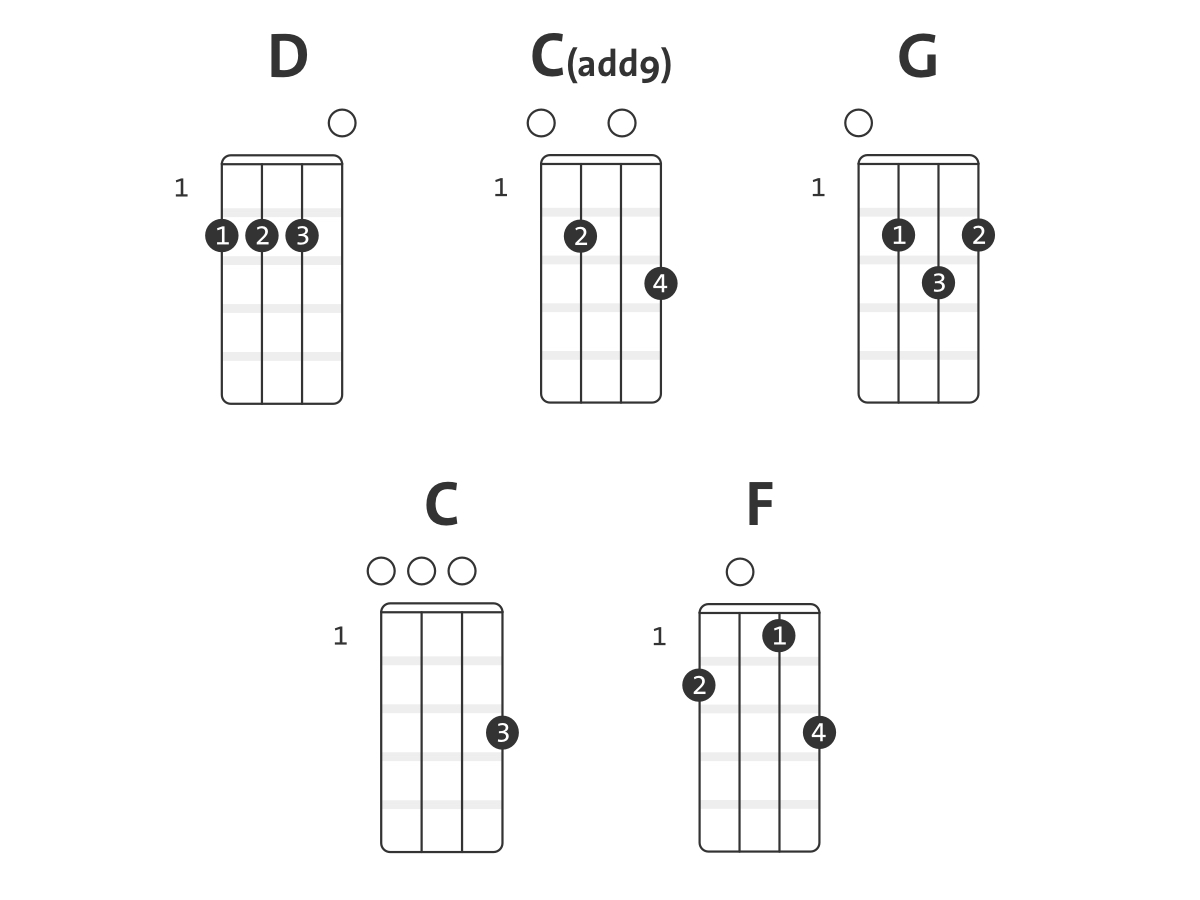 Now let’s take a look at the chord progressions for the chorus. We added a little counting part to help you with the rhythm. 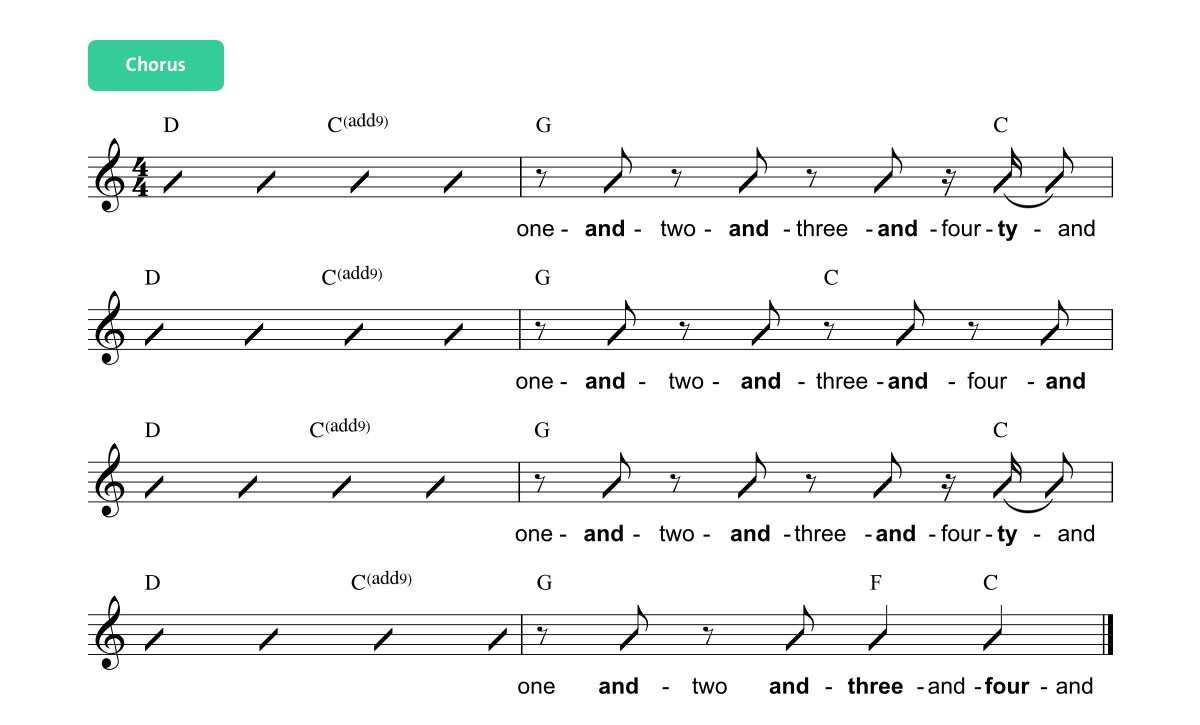 We would like to draw your attention to the last bars of each line. The accentuated chords G and C are played in an offbeat. To help you play these chords the right way, we put a metric pulse below, divided into the metric pulse and offbeat. Metric pulses are: “one,” “two,” “three” and “four.”

The offbeat falls between these pulses. Pulse and offbeat reflect eight notes. In other words, for each quarter note we count: “one – and” or “two – and” and so on. Coming back to these last bars of each line, we don’t play C and G chords on “one” or “two” or “three” or “four” beats. But we play it on the offbeat “and” followed after each metric pulse.

Congratulations! You’ve just learned how to play “Sweet Home Alabama” by Lynyrd Skynyrd! Since you’re reading this, we have the feeling that you’re thirsty for more. Happy to help out. In this part we’re going to show you how you can play a solo and jam on this song.

As we already explained, the harmonical core of “Sweet Home Alabama” is a three-chord sequence. This sequence is repeated over and over again. So, by playing the D chord, C chord, and G chord Lynyrd Skynyrd lays down a harmonic highway on top of which you can drive as fast, slow and freely as you want. There’s only one catch though: You need to know where this highway is. We’ll show you.

Both guitar and piano are soloing over these chord changes that we just dubbed “the highway.” So, as a ukulele player you, too, can use it. Let’s take a look at why these three chords are so easy to shred on. D, C and G belong to the G major family. That means that the G major scale can cover all these chords. There you have it; the G major scale is your highway.

First of all, let’s look at the G major scale:

Now, let’s take a look at the notes in each of the chords:

The one root note G is obviously played as an open G string. The other G is located on the E string on the third fret, marked by a black dot.

To make it even more bluesy we can add a so-called blue note, which is an A# (or Bb). The E minor pentatonic with an added blue note looks like this: E – G – A – A# – B – D. On the pictures below, the black dots stand for the E notes, which are the root notes, and the blue dots stand for the blue notes. Don’t forget about the open G string.

Now Muscle Shoals has got the Swampers
And they’ve been known to pick a song or two (yes they do)
Lord they get me off so much
They pick me up when I’m feelin’ blue
Now how about you?

This is the fourth and final verse of “Sweet Home Alabama” by Lynyrd Skynyrd. It’s natural to ask yourself: “What the heck are they singing about? Swampers, really?!” Yeah, really. For the record, Lynyrd Skynyrd — a name they borrowed from their physical education teacher Leonard Skinnard — is a band from Florida.

That’s right, Ed King, Gary Rossington, Ronnie van Zant, Allen Collins, Larry Junstrom and Bob Burns are originally from Jacksonville, Florida. Okay, okay, if we’re going to be specific, actually Ed King was from California, but still that’s not Alabama. Now that that’s out of the way, let’s go back to that fourth verse shall we?

One of the reasons that these Florida boys ended up in Alabama was because of the Swampers. This was the nickname for a group of musicians that ran a studio in which Lynyrd Skynyrd recorded some tracks.

As a matter of fact, Muscle Shoals Sound Studio is pretty epic and has a rich history. The list of artists that recorded their albums at the place is endless. From Aretha Franklin, Joe Cocker and the Rolling Stones, to George Michael, Bob Seger and Willie Nelson; to name a few. Now that’s a lot of great artists. So, one of the reasons that this song actually came to be, is that the Florida boys had so much fun recording tracks in the South that they wrote a song about it. Enjoy playing it. Happy jamming!

All music theory and transcriptions made by Kirill Dumchenko