After opening Rockit festival with a great show we met Joe Armon-Jones backstage. The artist told us everything about his passion for music, Jedi mind tricks and the London vibe. 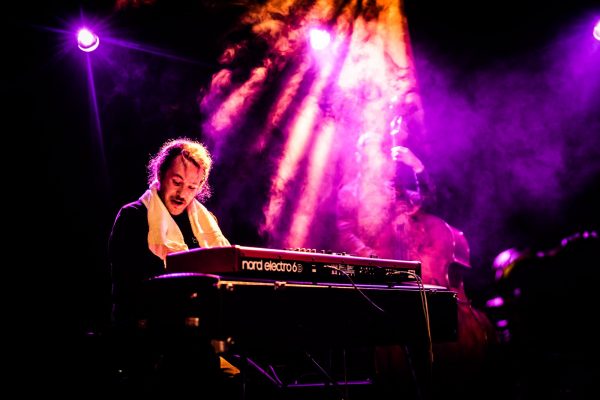 Great gig Joe! Your bass player is a real mister cool. He plays the bass like a terminator.

He never sweats man. I’m telling you, he never does.

How is your tour going so far?

It’s going really well. Yesterday we came from … Man, my mind is going blanc you know. So, we went to Berlin first and we did a gig at Club Gretchen. This is one leg of the tour. We’ve been touring from the start of October.

That’s heavy. Is it all becoming a blur at some point?

Well yeah, but I’m touring on and off. I play with a lot of different projects, so I kind of split my tour up in little legs as I call them. And I’ll be touring until December, you know. So, this leg was Berlin first, then Nuremberg for a new jazz festival, and then we came here. It’s been a blast man.

You look like the captain of a spaceship when you play. Turning nods and pushing buttons on the synth. Can you tell a little bit about the way you use your instrument?

I guess that’s the influence of dub, you know what I mean. I listen a lot to dub music and those guys like Lee “Scratch” Perry they’re behind the decks with buttons and effects controlling the music. I like to kind of try and add some of that vibe when I’m playing.

Cause you have all that stuff there on the synthesizer you know. But when I have too many different keyboards and different effect units, that’s too much for my brain. So, I like to keep it all in one place.

Do you always do the same thing and use the same effects, or does it all happen in the moment?

It’s always different man. It’s the same as the solos, just kind of whenever I feel like it basically. If I want to add vibes to the sound I use it. 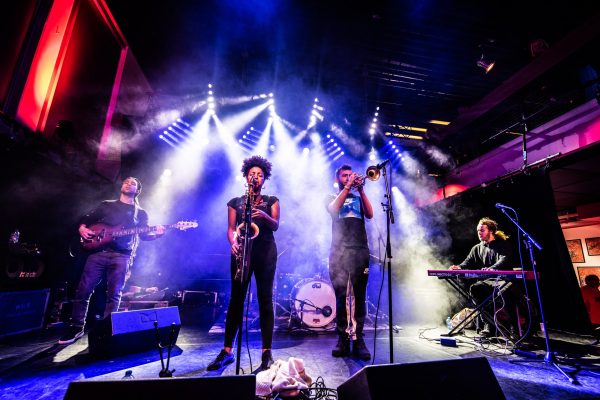 As a musician do you have any favorite chords you like to fall back on?

No man, I prefer minor to major that’s what I can say really. I like minor chords, but I don’t have a favorite chord or scale. Sometimes people come after gigs and ask what kind of scales I’m using. I find it a bit hard to think of things like that.

When I’m playing my brain is not going like this is a C major, F# minor, D minor. I kind of see it more as shapes on the keyboard when I’m playing. The sounds in the ear are more connected to what the keys look like, but I don’t really think of the actual word, you know what I mean?

Before we met you, we made some jokes about asking you when you stopped playing music and started making jazz.

So, when did you?

It’s interesting because I kind of know what you mean by that question. Even though anyone who doesn’t play jazz would be offended like: “What do you mean? Jazz is also music!” But there came a point where I stopped trying to learn other people’s music.

I really like the music, but the process of how you learn classical music is not the way I see it. Copying other people’s stuff is not bad, but I want to create new stuff based on something that is really there, you know. So that’s why I try to write my tunes with that purpose. To give me enough space.

That’s why there’s no complicated Snarky Puppy thing going on. It’s quite open, there are a few things queued and a few things that need to happen, but apart from that, it’s open. I let the musicians do what they want, you know.

You have a great band. They look very passionate about what they do.

Yeah man, that’s the thing. I switch the line up a lot, so I keep them on their toes. Sometimes it’s like a different bass player and drummer. Sometimes it’s different people on the sax and the trumpet. I’m always there, but I like to try and keep things rolling man.

And everyone is so busy. The people I want to play with they have their own careers as well, you know. So Nubya Garcia has her own thing going on. Marius the drummer has his own project on YAM Records. Luke has his own project with Nubiyan Twist. Dylan plays in Ezra with me.

So, like, everyone is busy doing their thing and I can’t require their time all the time. I have to have respect for that they have to do other things. But I’m lucky enough to have a big group of friends who I play with, who are all good enough and like to play my music.

You are seen as the new generation of the “London vibe” in the jazz scene. But what is the London vibe?

I’m glad you asked man. Because it is really like, you know: there’s an aesthetic going on, but it’s coming from the music as much as from the people. For people to, like, grab on to a certain scene and to pick up on it in different countries and hear about it and stuff, there needs to be an aesthetic, like a kind of vibe.

It’s partly down to the music but I think it’s a lot down to the people. So, like, the music we play is completely different. My music is not like Ezra even though a lot of the band members are the same. My music is very different from Nubya. If you come to see Nubya’s set later you’ll see what I mean. It’s so different man.

It’s all great and I love it all, but there’s a tendency for people to want to be like: “That’s like a genre. We got a genre here!” That’s cool in a way and yeah, it’s kind of a genre, but really, we are borrowing things from others.

I listen to dub all the time, so I’m taking stuff from dub. That’s not a new thing, that’s an old thing. Dub is very old, you know. In some ways, it’s older than jazz. When you look at where it’s come from. 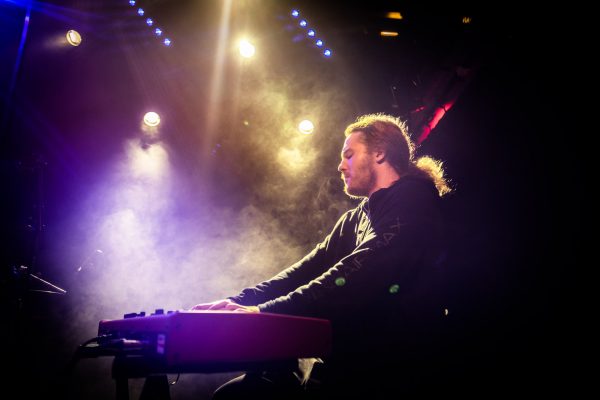 Does the London vibe come from the fact that you guys are free to do whatever you want?

Yeah, but we’ve always been thinking like that. We’ve never seen it as one genre from the start you know. When we started out it was like Ezra is a kind of afrobeat band and Nubya does jazz stuff. Moses is like the sickest jazz drummer around – he wasn’t doing electronics when he first started.

Now everyone’s kind of found their, I don’t want to say niche … direction they’re going in. Their passion so to speak. Because Moses and I were talking about that stuff. He told me: “Man I got this idea to do like a solo set.” He was coming up with the idea and thinking about it. Now he tours with it all over the world. He’s doing his thing with that.

It’s great and amazing to see people doing their thing. But I think people have done that as a natural reaction to other people being kind of like: “Yo, this is a genre!” I brought out a house EP last month under a different name. I’m trying not to make only jazz music or only one kind of music.

Cool, we definitely will check it out. But now about something else. What is your craziest backstage moment?

Man, there’ve been lots man. Over my whole life there have been some mad mad moments. But this band is all love man. Everybody’s so sweet and cheerful. These are my favorite people to travel with.

In this band, and in Ezra, people are very supportive and of course people get crazy and people like to enjoy themselves. But when you think of a tour and what goes on on tour, you can’t go all out every night. You pick your moments.

One time I was in Paris at the time of the riots, like two years ago. There were people throwing Molotov cocktails and demolishing cars and stuff. Anyway, we had a gig in Paris and for some reason, the venue didn’t have security. Normally you have a big metal gate with some security guys that stop the audience to get on stage. But they just didn’t have that.

So, people were just climbing on stage. There were about two thousand people in the room. Everybody started to try to get on stage, some were trying to grab the main singer. They didn’t even have security backstage to come and deal with this.

So, the person who came on stage to help us was the artist liaison, the guy who was taking care of us the whole day giving us coffee and food. Now he had to come and grab like this crazy girl, put her over his shoulder, and drag her off stage.

It was funny man. The whole time I’m just trying to keep the keys part going. Hoping that the singer is going to keep on playing, because it was all on track and we have to keep going man. That was funny.

Most of the time we keep it chill. I tour a lot and if you treat every day on tour as a party it will break you up man. Any older musician that’s been touring for a while will tell you that you just can’t do that kind of thing every night. You can choose your nights and make sure those are good nights. But overall you can’t sustain that kind of lifestyle.

So what kind of advice would you give a starting musician?

I would say the most valuable thing ever is trying to cultivate your own sound. Not just try to sound different from other people – which is part of it – but trying to find a sound that is you. I know it sounds like a kind of Jedi thing to say, but once you get what it means it’s a real thing.

That’s why you can put on a record and after a few chords you can say: “Oh, that’s Bird playing.” And if it’s not it’s probably someone copying him, because it’s not the chords but the way they are played. The sound is the thing you recognize.

And how do you find your own sound?

By having your inspirations of course. I listen to musicians and take bits and pieces that inspire me. The thing is that in the jazz world in general, you’re expected to master what Charley Parker does and you have to master what Michael Brecker‘s done, before you can start making your own sound.

But before you have mastered all that, it’s too late for your own thing. So, start young and come up with your own sound.

Barre chords - Four basic chord shapes to get you started
Lilly Hiatt: 'Everyone has their own learning style,…