Get ready to learn basic chords, the easy way. Last week we talked about how to play an A major in three simple steps. This week our focus will be on its sad brother: the A minor.

Are your fingers sore from pressing down on the strings all the time? Read about blister prevention here. Okay, eyes on the prize now. At the end of this week your arsenal of basic chords will have expanded to four. We have already discussed the E chord, the Em chord, and the A chord in previous posts. Today’s first prize is the Am. Do you know what the second prize is? Grab your guitar and tune it, that’s the second prize.

As always, the first step is tuning your guitar. This goes for everyone playing an instrument, from beginner to pro. No one can get away with an out-of-tune guitar. For a standard tuning you can use a tuner, or an application for your phone like KARANG.

Step 2 – Observe the A minor diagram

To learn how to play a chord, you first need to know what it looks like. Chord diagrams are a common way of visualizing chords. Chord what?! Look at the illustration below. It shows you part of the neck of the guitar. The vertical lines from left to right are the strings E, A, D, G, B, e (strings are counted from the bottom to the top, so the high e is the first string and the low E the sixth).

You can also see transparent circles at the top. These indicate the so-called open strings of the chord: those strings that you don’t have to press to play the chord. The number 1 indicates the first fret represented in the diagram. This is useful because it shows you exactly where to play the chord on the fretboard. In this case the Am is played at the very top of the neck, at the first fret. 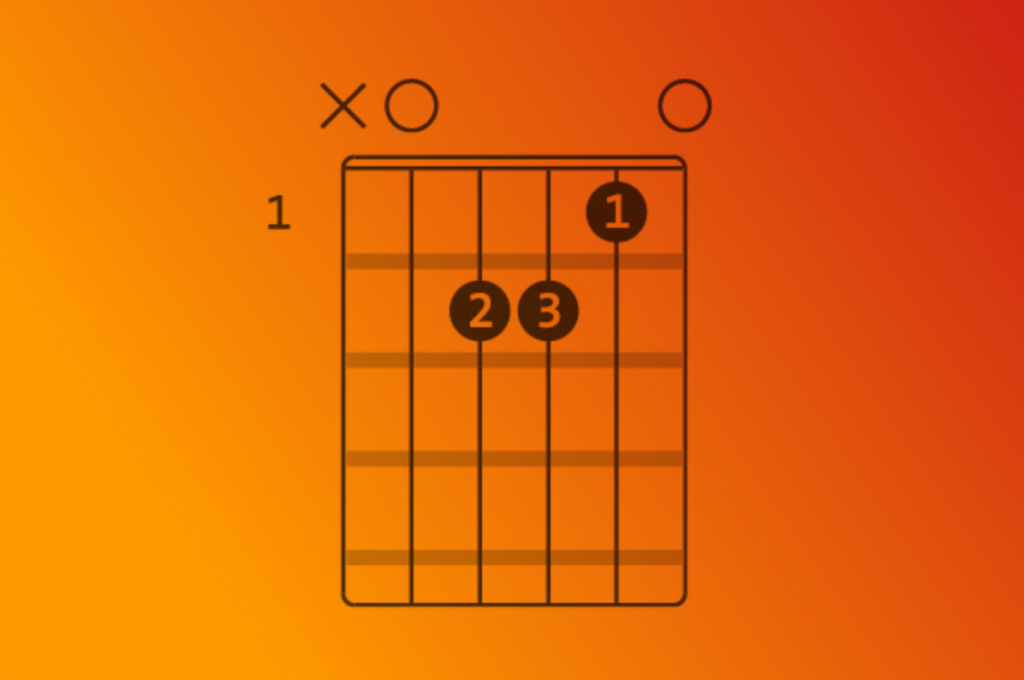 Step 3 – Get your fingers in the right position

Now it’s time to position your index finger on the first fret of the second string (the B string) and press hard. Strum all the strings, starting from the A string. This is the sound of the Am. Congratulations, you’ve added another chord to your palette!

Step 4 (bonus) – What does an Am chord consist of?

Now that you know how to play an Am, the question is: what to do next? You can start applying your new knowledge to tracks written in Am. Or you can read on and learn a bit more about the music theory behind the Am chord. Whatever you choose, there are no wrong answers here.

Ha! You’re still with us. That’s it. Hold on tight, because here comes the roller coaster of theory. Each basic chord we discuss consists of a number of basic elements: the root note, the third note (third), the fifth note (fifth) and the eighth note (octave).

The octave and the root are the same note, but they differ in pitch. The fifth provides the triad with power by supporting it harmonically. The third indicates whether a chord is major or minor. This says something about the mood of the chord — major often sounds cheerful and minor sounds more melancholic.

Now take another look at the Am chord diagram. Which notes do you actually use from the scale? You strum an A, an E, an A and a C – so root, fifth, octave and third. Makes sense, right? See our blog post on more complex chord constructions. Is your head spinning from all this theory? Don’t worry about that right now and play along with tracks from Deep Purple and Chic written in Am. Happy jamming!