You’ve been dreaming of a career in rock ‘n’ roll for a long time, but there are two little problems: you don’t have a guitar and, even if you had, you don’t know how to use it. The first problem can be solved with a summer job and a letter to Santa. The second is more challenging. That’s where we come in. Chordify helps you step by step and starts with the basics: the Em chord.

How to play an Em (E minor) chord? You always start by tuning your guitar, like we explained in the blog post about the basic E chord. Then you have a look the chord diagram and you get your fingers in the right position on the fretboard. So let’s start with step one.

Step 1 – Tune your guitar in E

Playing guitar is a centuries-old craft. And throughout history musicians have experimented with different ways of tuning their instruments.

How about an open D tuning, which is frequently used in metal. Or an Eb tuning, popular in grunge and rock. Those are cool but not relevant for the lesson at hand. So, let’s start at the beginning. Tuning your guitar in E. Check out our blog post with tips & tricks for tuning your guitar. You can use an analog or digital tuner, or a tuning app like KARANG.

The standard representation for a chord shape is a chord diagram (shown below). This is a picture that shows the position of your fingers on the fretboard. Take a good look at the picture below. What do you notice? 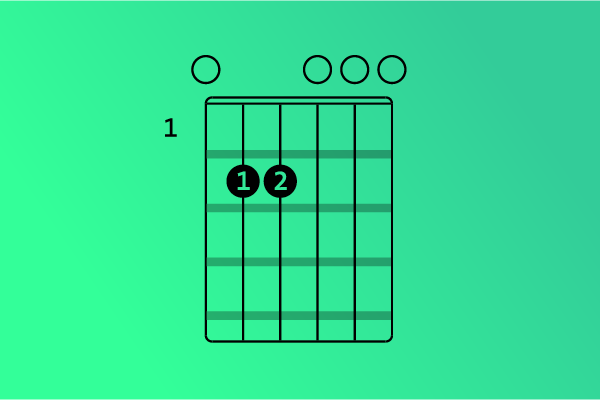 There are four circles lining the top; a number 1 at the top left-hand corner; and in the grid there are two black dots, each with a number. What you’re looking at is an abstract representation of a part of the neck of the guitar. “But which part?” Good question! The “1” in the top left-hand corner helps you get your bearings. It indicates the fret, in this case the first, where you will put you fingers.

The light-grey horizontal lines all represent frets. The black vertical lines are strings. From left to right you see: the low E, the A, the D, the G, the B and the high e. The black dots on the strings indicate  the position of your fingers. The 1 is your index finger and the 2 is your middle finger. The circles at the top tell you that these strings are played “open.” This means you play them without placing your fingers anywhere on the fretboard.

Now you know how to read a chord diagram. Simple, isn’t it? Put your index finger on the second fret of the A string and your middle finger on the second fret of the D string. Note: an Em chord can also be played with your middle and ring finger, or even your ring finger and pinky. This depends on your preference or which chord you want to play afterwards.

Now press down on the strings with your finger tips; and apply some pressure. Does it hurt? You’ll get used to it. The life of a rocker isn’t always easy. When pressing the strings, make sure you’re not touching any other strings by accident. All strings should be free to resonate and produce a clear tone. Strike them all now. And? Sounds good, doesn’t it? Congratulations! Now you know how to play an Em.

We promised a three-step explanation of an Em chord. So, if you think you’re done, feel free to leave this blog and start jamming. If you decide to read on, you’ll get a brief summary of the music theory behind an Em chord. If you start to feel a bit out of your depth don’t be alarmed, the biggest rockers don’t always get it right either.

The Em consists of three notes that form the basis of the chord. These notes come from the scale of the Em key. It’s important to know that each basic chord has the same building blocks: a combination of the root, the third note (third), the fifth note (fifth) and the eighth note (octave).

But what does that scale look like? Well, we saved the best for last. From left to right the scale of Em starts with the root E, followed by the second note F#, the third is a G, the fourth note is an A, followed by a fifth B, the sixth note is the C, the seventh note of the ladder is a D, and the last note is the octave E.

“Huh, how come the octave is the same note as the root?” Good thinking. If you go up eight steps in any major or minor scale, you will end up with the same note only higher in pitch. This note is needed to give strength to the root. The fifth note provides harmony and the third indicates whether a chord is major or minor.

If you look closely, you can see that the difference between E and Em is only one finger, specifically the one placed on the G string. If you’re playing an E chord, you’ll put your index finger on the first fret of the G string, making it a G#. The difference with the Em is that the third (in the Em scale) is a G. And yes this happens to be an open string, so you don’t have to press any string on the fretboard. But remember that the third is still there.

Enough theory for now! Get out your guitar and start jamming. Here’s a list of songs in Em. Finding it hard to stay motivated? Read this blog post about motivating yourself. Do your fingers hurt? Check out these five tips to prevent this. Enjoy and happy jamming!

Did you enjoy this article? Stay tuned for next week when we’ll publish “How to play an Am chord in three simple steps.”