The rap group Reykjavíkurdætur (RKVDTR) – Daughters of Reykjavík – from Iceland shined on Eurosonic at the Music Moves Europe Talent Awards. They won the audience prize and the jury prize for up-and-coming talent in Europe. We spoke to Salka, Thura, Blær, and Ragga Holm from the crew about rap, feminism, and pumping breast milk backstage.

Congratulations on your price!

What kind of impact do you think this price will have?

Salka: We hope a lot. I guess this will be a stamp of approval for the bookers. Especially because we often need an extra boost for people to book us, because we are kind of an expensive band. At this moment we are touring with nine Daughters plus team.

Blær: This price is the next step to the world fame, we hope. And it is a motivation for us. We have never won an award before.

When did you start out with RKVDTR?

Salka: Since 2013. The group has changed a lot since then of course. In 2013 we were like a bunch of girls that had an interest in rapping. We were just amateurs having a good time. It all started to take off when we released some of our tracks. The songs became the talk of the town in Iceland.

Blær: The media kind of created us by giving our first tracks a lot of attention.

So one day you were just trying stuff out and the next you were a hype?

Salka: Yes, we had to step up our game overnight. From just a few girls having a good time in the studio we suddenly had to turn pro. Now, five years later the band is in this form and the ways of composing, working and creating is no more than two years old.

Blær: We are constantly evolving and we have so many members. So the current form is maybe just a few months old.

How big is your crew?

Thura: We have had many many members throughout the years. We started out with 14 girls and at some point we had grown as big as 21. It was kind of an open sort of a phenomenon. We didn’t always came with the full crew.

Blær: We’re kind of more like a movement than a crew, I guess.

Salka: A few of us were in the original RKVDTR, but most of our current crew is new. 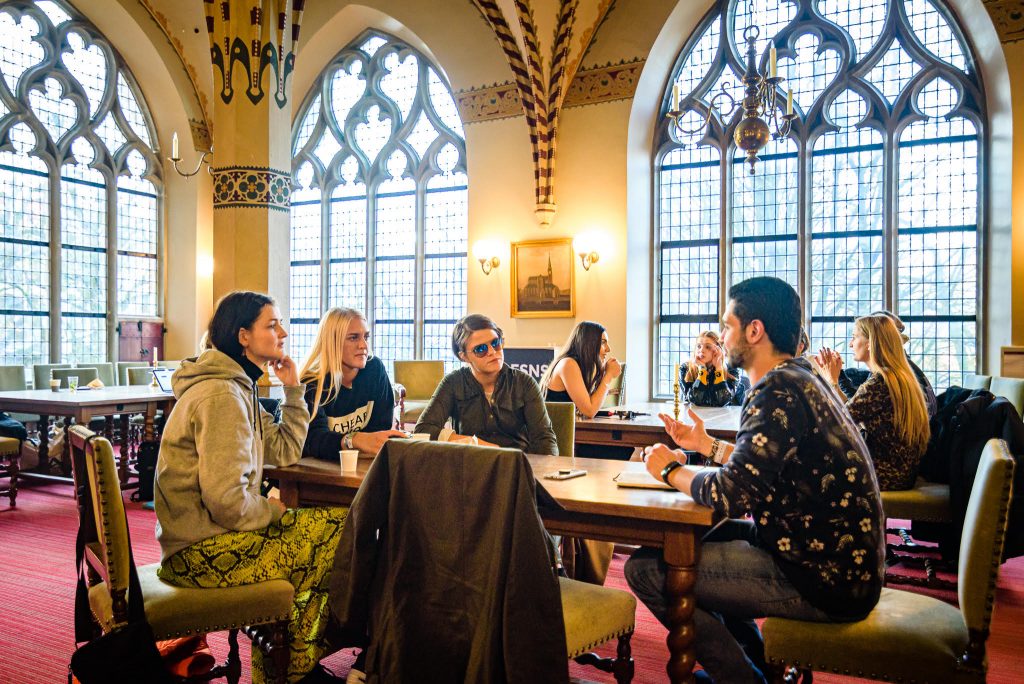 You said in an interview that what you do is shocking people, but guys have done this for decades now and nobody is shocked by that. What do we have to change in the music industry so people aren’t surprised by girls rapping?

Blær: I think the music industry needs more diversity. What we have is really great. We’re a group of women – which are all very different in style, taste in music, looks, you name it. But that’s kind of unique. There are so many male rappers today and nobody is surprised by what they do. We allow them to be different and authentic.

But when it comes to women who want to rap the industry expects you to be the next Nicki Minaj. That is the only reference people have with female rappers. Women in the rap industry need more visibility, so the fans can be exposed to more diversity and get used to it.

Ragga: That is how you create more freedom for female rappers. Otherwise women are trapped in this Nicki Minaj stigma. The rap scene these days is very young, crazy and bad in a good way. This is a problem for women, because we are not thought to be like that and people don’t expect us to behave in such a way. So when amateurs try to become professionals, the industry shuts you down if you’re not very very skilled, have done your homework and are very disciplined. It’s harder than it is for boys in a way.

Thura: True. That is what we had to go through. Basically a shit-storm of people telling us we are not good enough, not appropriate and just a few girls who were trying stuff out.

By people you mean the industry or your mom?

Blær: No not our moms, Icelandic men. Moms love us.

When you write music, do you have favorite chords or keys you like to fall back on?

Thura: No, not necessarily. Of course we want to keep it interesting and not write all happy tunes in C major. We worked with a lot of different producers in the beginning, so I can’t speak for them. Now we’re making our second full-length record and I’m producing it, so I’m trying stuff out.

I listened to your tracks in the gym and they really pumped it up. Of course I didn’t understand a word you’re saying, but still the vibe is awesome.

Salka: Thanks! Did it bother you that you couldn’t understand us?

No, not really. Of course I’m missing the whole message, but the music and rap is great.

Thura: We are very performance-oriented, so our strengths are at their best when you see us on stage. That’s when our diversity comes to life. So, what I’m trying to say is that we write our tracks with the performance on stage in front of thousands of people in our heads. A lot of our songs are an attack. But our new album is musically more complex than the previous.

Blær: I know one! Dísa, one of our crew members, had just given birth to her baby boy. And when you just had a kid your breasts are full of milk, so you have to pump it out in a flask otherwise it hurts. We were sharing our backstage with a lot of other people, but that didn’t stop Dísa from whooping out her breasts and start pumping. It was awesome and crazy at the same time.

Ragga: But that wasn’t really crazy. I remember one time we were sharing the backstage with Kendrick Lamar. Later when we looked at some selfies he was standing just a few feet away from us. That was pretty cool.