You come across them in every music scene: that one band that has a little more charisma, authenticity, and perseverance. Throw a magical ingredient of ‘hit potential’ into the mix, and the cocktail is complete. The Vices is one of those bands, and we had a chat with them right after their fifth show (!) of the weekend. 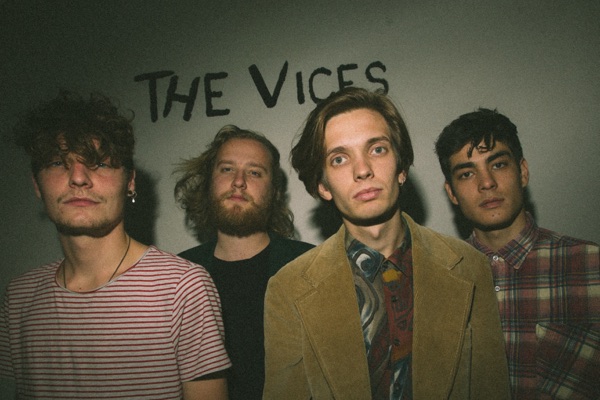 Simon: Can I start with WHOOHOOOO!

That’s the answer to the first question. How are you feeling?

Matthijs: I have used Chordify recently and it was absolutely spot on!

That’s really nice to hear. And thanks for taking the time to do this interview. The Vices are only just beginning, but you have a full touring schedule already. What’s your secret?

Simon [joking]: Sleep a lot, don’t drink too much, don’t travel too much, and eat vegan food.

Floris: I think it’s because we’re having a really good time together. There was one show where the sound suddenly broke down, but we made the best out of that situation. The audience notices that you’re having fun together.

Matthijs: The foundation is solid. We’re a group of friends that share a passion and make music together.

“And we’re fully committed to the music we make.”

Jonathan: Our chemistry is just really good. When you hit a string, you look at each other and there’s an understanding.

Floris: At the end of the set list just now I thought, “fuck it, I want to go on.” And then you turn around and you see everyone just continuing to play. And we’re fully committed to the music we make. When you have that it’s easier to convey. 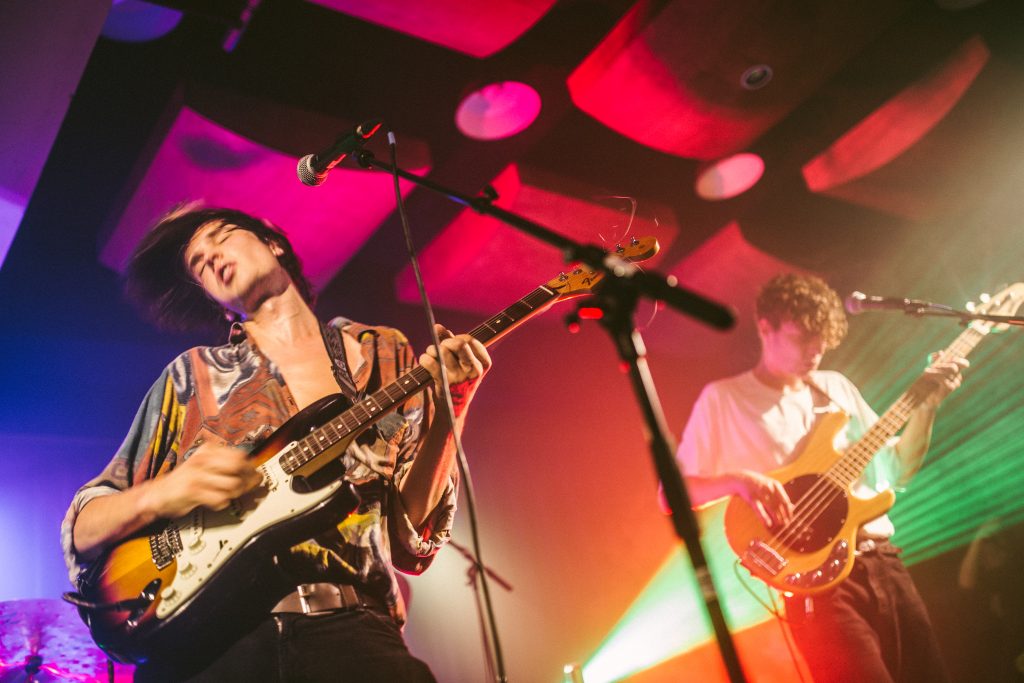 Congratulations on your first EP. You released four songs now, but you play way more live. What’s that about?

Floris: The songs we released were the most-complete at that time. We already had other songs, but they weren’t as good and we’ve stopped playing them live. You start out writing a lot, then you have 20 songs and then you think: “with these eight we can make two EPs.” We throw out the rest, or leave them for later.

Those other songs that we play live now are written at a later point, we write quite fast now.

Can you still produce good writing with so many gigs?

Floris: My week is really cut in half; Thursday till Sunday we’re playing and Monday evening I start writing during rehearsal or at home. Things tend to settle down then, so you can start writing about all the stuff you’ve been through on the weekend.

Jonathan: And he’s also at university. What a man, right?

We spoke with together PANGEA and they told us they release country songs when everyone expects garage punk. So why did you make the decision to go with another band name, and stop playing old songs?

Floris: Because we were twelve when we started. At twelve years old you think of a band name like Ten Years Today, as we called ourselves back then, but then you get older and you outgrow that.

Simon: We all agreed that we should have a new band name, and a new incentive. We wouldn’t want to change it again at this point.

Floris: If we would release a totally different record in two years, we would still do it as The Vices, because that’s who we are now.

How many hours a day do you practice?

Simon: I play around three to four hours a day. I study at the Popculture Academy, so I have homework and the band.

Floris: Like yesterday, we had four hours pre-production in the studio and after that a show. Then you play around four to five hours a day.

Matthijs: I study at the conservatory, so I’m holding drumsticks for about seven days a week, at least two hours a day.

“I play around three to four hours a day.”

What music inspired you to make music yourself?

Simon: And Jimi Hendrix. Even though I’m a bassist; I listened to that a lot.

Floris: Yeah, and then you thought, “I should just play bass, because I could never pull this off.”

Simon: Billy Cox, the Hendrix bass player, is the shit. That guy has been in the army and went completely mad.

Floris: But the Peppers and Hendrix are very similar. John Frusciante really tried to copy Hendrix when he started. After that he slowly started developing his own stuff. I really liked that. When I was ten I saw a documentary about him. I had been playing a little, but at that moment I thought: “Now I’m really gonna do it.” That was the starting point.

“at that moment I thought: ‘Now I’m really gonna do it.'”

Simon: I only really started playing because of Floris. I was in a high school band and then he came to my room in the attic, I picked up my dad’s bass guitar, and that was it. 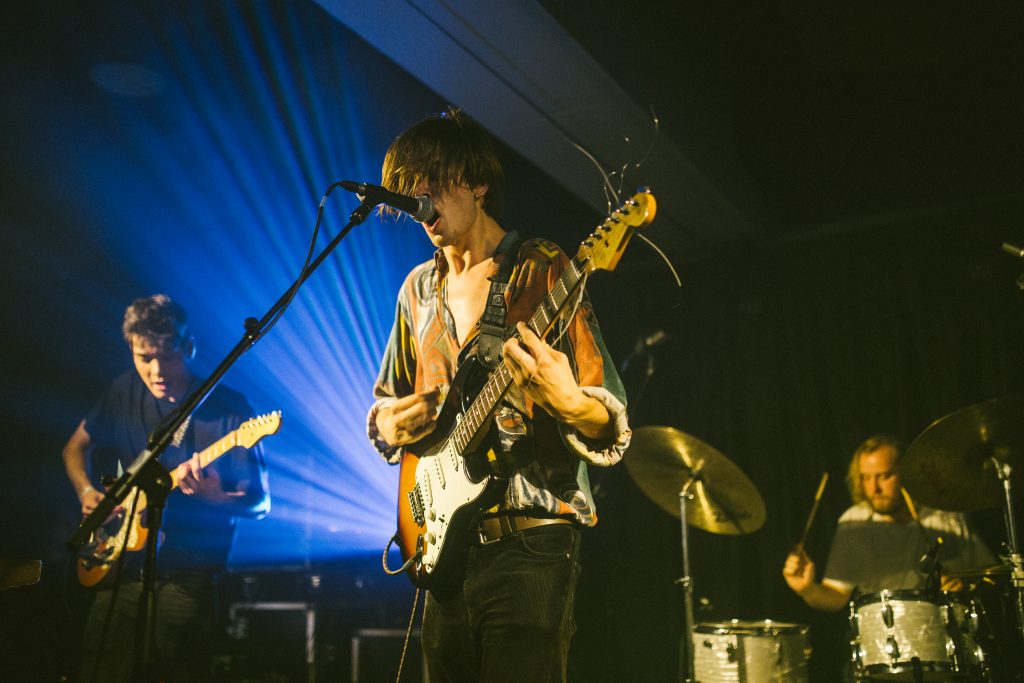 Do you have a favorite chord?

Jonathan: D minor!! That’s the chord that I started with on the organ. I know all the scales. That’s my first love.

Floris: The final chord because that means I can leave.

Simon: But you’re the drummer.

“The nice thing is, our drummer knows the most about chords.”

Floris: And I’m the guitarist and I don’t know which one that is.

Jonathan: Yes #9, you play that with nine fingers.

Jonathan: The nice thing is, our drummer knows the most about chords.

Floris [gets out his guitar]: I really like this chord, but I have no idea what it’s called.

What song do you recommend for our readers to play?

Floris: If you want to study up and down strokes, I would play “Life Grows.” Jonathan has been breaking his back over that one the last week. I think he’s got it by now.

Simon: If you play bass, “So It Goes” is a good one, because you can really bounce on that one. That’s really nice.

Matthijs: As a drummer, I would play “Speeding up to Last,” because you can play really linear on that one. So you’re not playing everything at once, but one at a time.

Jonathan: If you’re a solo guitarist, “Polyphonia” is really cool. There are some great licks in those crazy solos of you. I have no idea what you play there.

Matthijs: You should play the music that you really like.

Simon: Yes, and not on your own in you little room in the attic but with people; with friends.

Floris: Yes, what you like indeed. So not like when you get an acoustic guitar from your parents, and they say “first learn classical guitar.” Then I would’ve never continued to play. My parents gave me an electric guitar instantly and that was perfect. Exactly what I wanted. It makes no sense to take classical lessons, just because that’s what people say you have to do. Just do what you like.

Everything you want to know about open guitar…
Chordify Backstage: The Bloodhound Gang