Looking to learn some guitar chords? Chordify is the place to be. We’ve got explainer articles on open guitar chords, barre chords, seventh chords, power chords, and inversions — and we’ll probably be adding more in the future like suspended chords and diminished chords. Everything to make your jams a little bit sweeter. In order to get you started on learning chords, we’ve listed all the topics below, with links to more detailed articles. Enjoy!

When you pick up the guitar for the very first time, you start off with learning the basics. Learn to tune your guitar in standard tuning for starters. After that it’s a good thing to teach yourself to read a chord diagram, so you know where to position your fingers.

Then you can start with playing open chords. An open chord is a chord where one or more strings are not pressed, like the Em chord, the E chord, the A chord, the Am chord, the D chord, the Dm chord, the C chord, the G chord, and the F chord. That last one is the toughest because you’ll have to cover two strings with one finger.

If you’re looking for a more detailed explanation of how to play basic triads (open chords) check out the blog posts we’ve written on the subject. Every post has a tutorial video that shows you exactly how to play each specific chord.  Wondering about the basic music theory of guitar chords? Find out about that in “A simple introduction to basic guitar chords theory”.

After mastering the basic triads, it’s time to take your guitar skills to the next level, with barre chords. When you’re playing a barre chord, you’re actually creating a moveable nut — the part at the top of your guitar, that keeps all the strings in place — with your index finger. This way you’re shortening the fretboard of the instrument. And, by doing so, you create a new field on which you can experiment with finger positions.

Luckily, there’s no need to reinvent the wheel when it comes to playing barre chords. You can reuse a lot of the shapes you’ve learned by playing open chords. If, for example, you want to play an F major barre chord, all you have to do is place your fingers in the E major position and your index finger on the first fret. Cool huh? Learn how to play all major and minor barre chords with just four basic chord shapes. 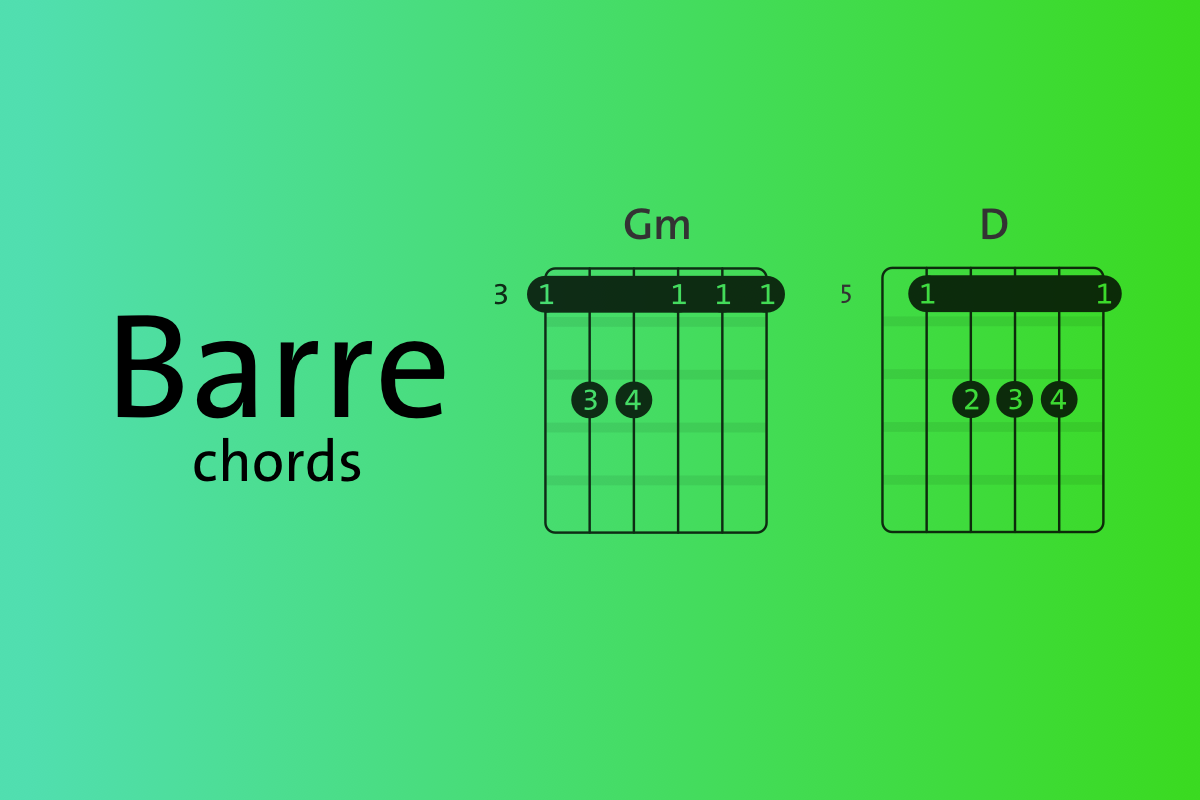 A seventh chord is a basic triad with the addition of the seventh note of the scale from which the chord is derived. That’s why we use the digit 7 in the name of the chord. Sounds like hocus-pocus? Don’t worry. As you can see in our “Simple introduction to basic guitar chords theory,” a chord is based on a scale.

The Am7 chord, for instance, is based on the A minor scale, which contains seven notes: A, B, C, D, E, F, and G. A basic triad consists of the first, third, and fifth note. When you add the seventh note to the first three you get a seventh chord.

This is an oversimplified explanation of a way more complex phenomenon. So, we suggest you check out “How to play an Am7 chord in three simple steps” for a more elaborate explanation of the seventh chord. 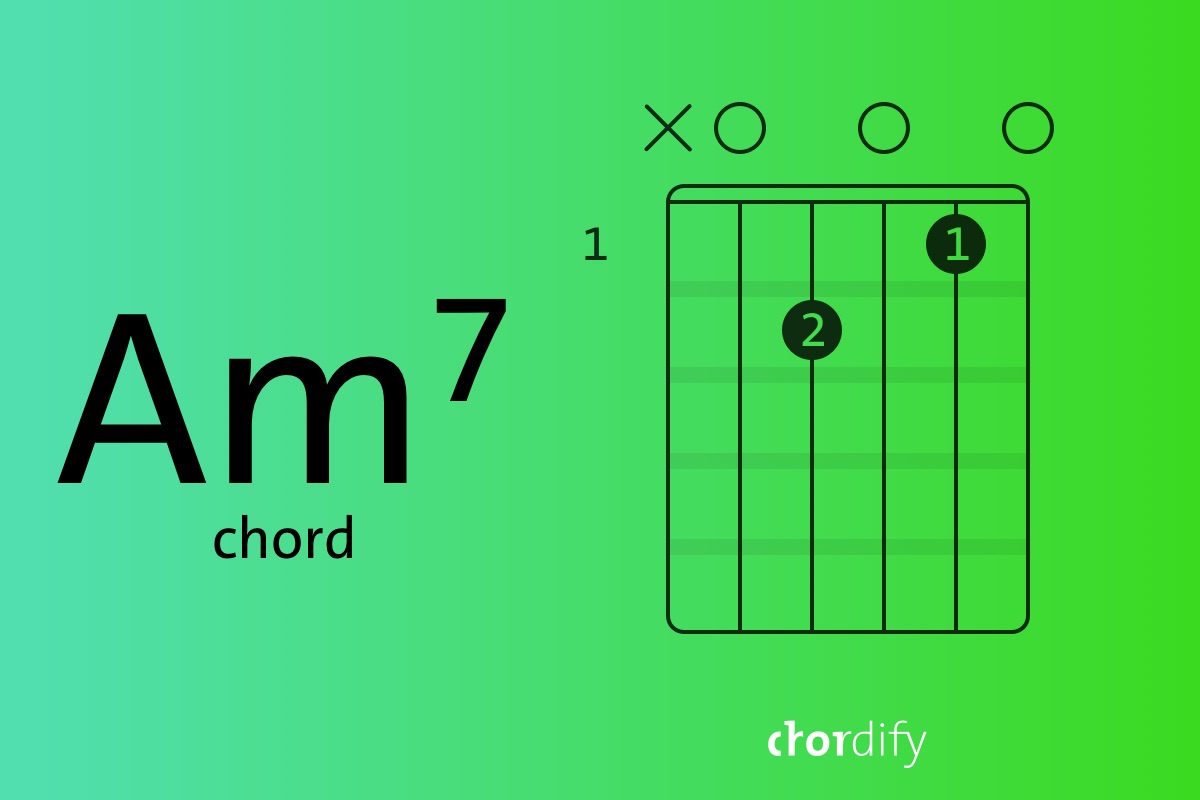 Genres, like rock ’n’ roll, metal, and punk, are all about raw force and simplicity. That’s why they love the power chord. Fun fact: A power chord isn’t a chord at all, but a harmony of two notes. Remember the basic chords? Their DNA consists of the root note, the third, and the fifth.

The third makes a chord major or minor. But what happens when you remove it? Well, you’re left with a very strong harmony, which we call a power chord. Because this harmony is made of the interval between root and fifth we use the digit 5 in the name. For example: D5 or A5. If you want to know more about this subject, check out our blog post “School of rock – the basics for a rock ‘n roll jam”. 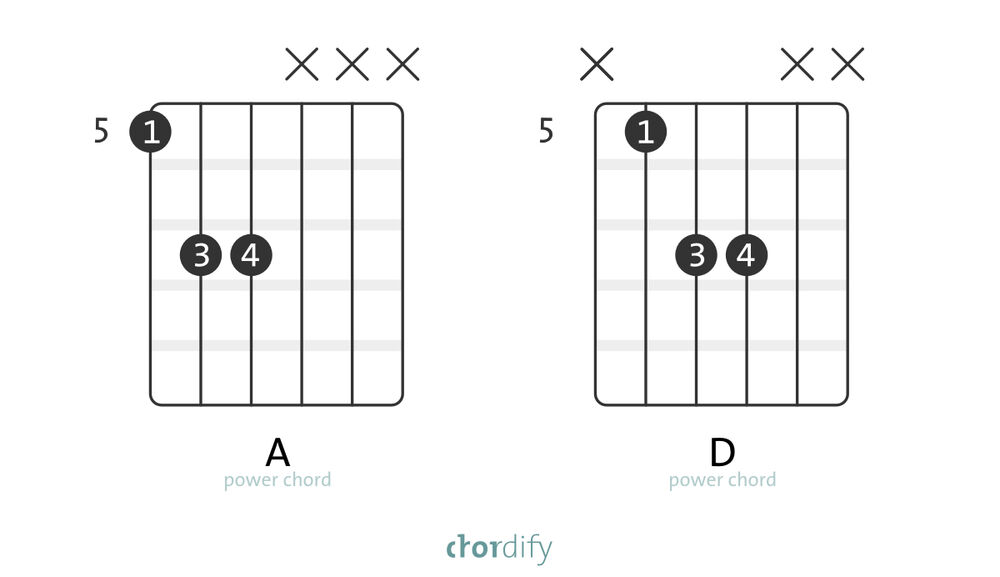 All right, we’ve discussed the four most used guitar chords in popular music. But, of course, there are many, many more. Once you’ve mastered open chords, barre chords, seventh chords, and power chords it might be time for you to start playing around with inversions.

Who says that a chord should start with the root note? What will happen if you put the third at the top, or the fifth, or — in the case of seventh chords — the seventh. The simple answer is that the chord remains the same in theory, but the sound will change. These chords are called inversions, and they’re pretty cool once you get the hang of them. Learn all about inversions in our music dictionary. 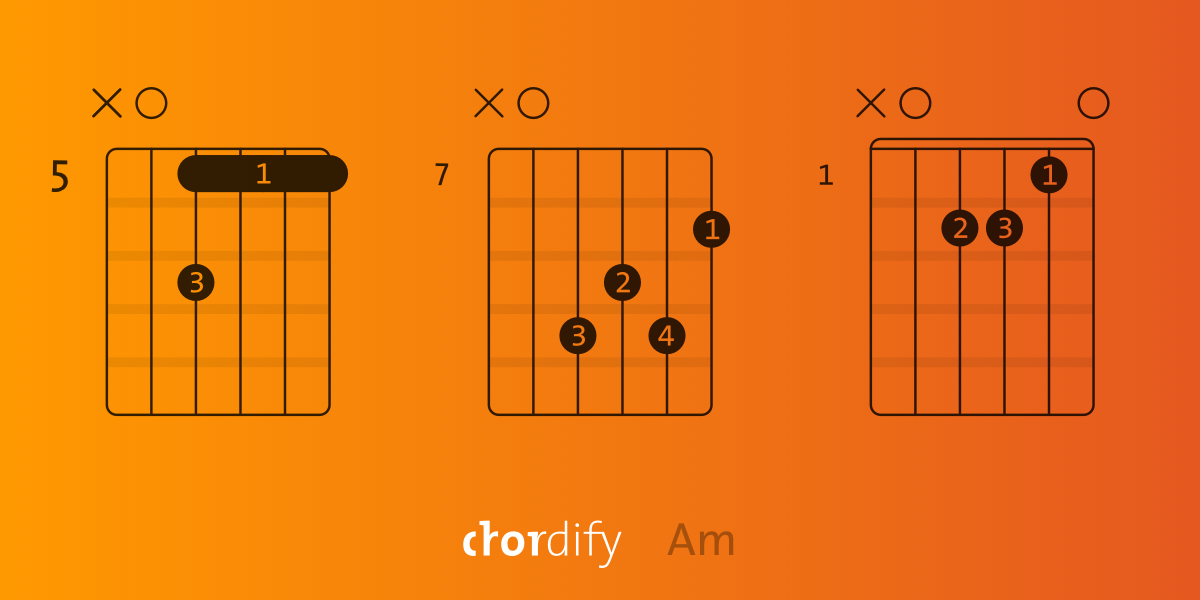 Inversions of the Am chord

So far we’ve discussed a lot of guitar chords in a very short time. Remember that this is just the tip of the iceberg, a little push in the right direction so you can get your feet wet. The world of guitar chords is big as you can see for yourself in our chord diagram finder; hopefully this article provides the tools to get you going. Enjoy your journey. Happy jamming!