Now that we’ve gone over most of the basic major chords it’s time to delve a little deeper into the minor differences. One of the best chords to play after the Am is the Bm. Do you know why? Because it’s the same shape moved down two frets on the neck. It’s like shooting fish in a barrel. 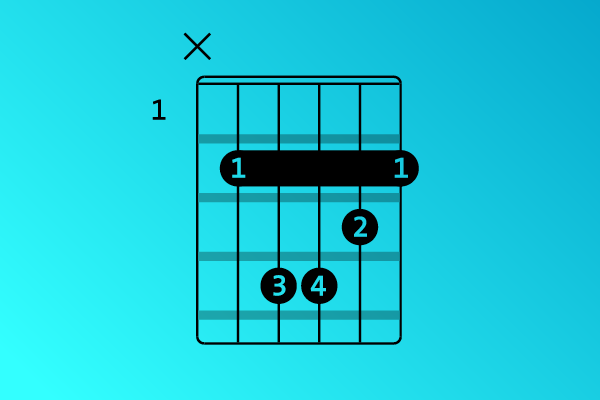 When you’re looking at chords you can approach the neck from different angles. The most obvious way is to look at each position separately. After all, they are all different chords. The other way is to consider that there are a limited number of shapes that sound different at each position. That makes it a lot clearer, don’t you think? Just look at the Bm. You have to put your index finger in barre to simulate the nut, but in fact, the figure is the same as the Em, the Fm, the Gm and so on and so forth.

The Bm scale from which the Bm chord results consists of B, C#, D, E, F#, G, and A. It is therefore not strange that variations on these notes can be found in the form of chords in tracks written in Bm, such as “Green Eyes” from Coldplay.

So we see that the A, the B, the D, the G, and the E form the basis for this song. These are beginner chords that are good for practicing as often as possible. Therefore this track is suitable for both beginners and advanced players. The latter should pay close attention to the touch. This sounds easy but is fundamental for the correct interpretation of the song.

Rock ‘n roll occurs in many forms. Upbeat ska mixed with a touch of Tchaikovsky’s “Swan Lake” is a good example of this. Madness’ song has everything a pop song needs to find the edges of the genre.

The chord progression leads you along almost all notes of the Bm scale. Therefore it’s a challenge for the beginning guitarist. Although, with the loop function you can learn the song piece by piece. Pay attention to the ska attack.

“Someone please call ‘911′“, because this track is sick! Last week we already had Wyclef Jean together with The Fugees, this week we can’t ignore it again. This track with Mary J. Blige is simple when it comes to the chord progression, so you can do anything with it. As a beginner you can just practice on the E, Bm, A and G chord scheme.

As an advanced guitarist, the guitar lick may be the bigger challenge. Pay attention to how the tune of Wyclef Jean subtly goes through the scale of Bm. If you really want to impress people with your jam, you can try to alternate between the chords and the guitar riff.

Move on Up -Curtis Mayfield

We conclude this week’s chord with a groovy classic. “Move on Up” by Curtis Mayfield is a track that appeared during the seventies in America. Fun fact: the original track is longer than nine minutes. To make it suitable for radio it was shortened to less than three minutes.

Because of the orchestration the song seems more difficult than it is. Although the tempo in which the chords follow each other up and the fingerings themselves are quite difficult in the beginning. Therefore we advise you to take your time for this. Start with the chords first, without practicing the track and only then play along. Cancel all your appointments, because this will make your weekend sweet.

Do you need some more help learning the chords? Learn the bm chord now with our 3 step guide.