This week we tune into the C minor. Wait, there no reason to be sad. Minor is not always a synonym for tearjerkers and sad songs, on the contrary. From hip-hop to blues and pop, our chord of the week fits everywhere – and everywhere in between. It’s an honor, and a real pleasure to present to you: the C minor (Cm). 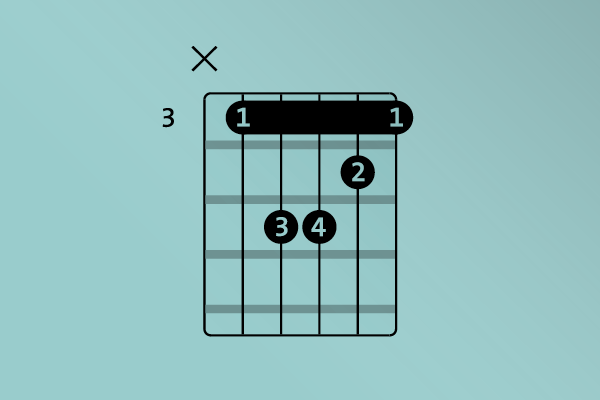 Our chord of the week is – not surprisingly – build up out of notes from the Cm scale, which consists of C, D, Eb, F, G, Ab, and Bb. You might recall, from other blog posts, that the notes from a scale often appear as chords in compositions. But enough theory. Time for action!

Since I’ve Been Loving You – Led Zeppelin

Let’s start with a classic. “Since I’ve Been Loving You” by Led Zeppelin is an example of a song in which blues and rock converge, and it’s written in Cm. The track is a nice crossover between seventies rock and the fertile ground from which this genre originated: the blues.

The song starts with a solo by Jimmy Page. The accompanying melody immediately covers the entire spectrum of the basic tones of the Cm scale – it passes through C, Eb, F, G, Ab – and variations thereupon, that follow each other in quick succession. As such, this song is a good exercise for the advanced beginner.

We all know the sweet soulful voice of Shirley Bassey that symbolizes the sound of the first Bond movies. ‘No diva can beat that’, you might say, although Adele will certainly come close with “Skyfall”.

The verse of “Skyfall” consists of Cm, F, Fm, Gm, and Ab. The chorus is extended with a D and an Eb. Don’t be put off by the fast succession of chords, rather make it easy for yourself by cutting the song into pieces. First practice only the verse, and then only the chorus. Use the loop function for this. This way you don’t have to rewind each time.

We promised you pop and hip-hop, and if we promise something, we deliver on it. Die Antwoord is one of the most controversial hip-hop acts of the moment, and this South African duo is anything but boring, as we can hear in the track “Rich Bitch”.

This song is suitable for the beginner who is up for an experiment. The chord scheme is not very difficult since it only consists of two triads: Cm and Fm. Diversions to Gm and D are good for some variation. Play this song in a jam and see if your audience recognizes it.

“Rich Bitch” may not fly at your grandmother’s birthday party, but you can lighten the mood with this classic song in a new look. Weezer made a quite literal cover of the Toto song “Africa“. The track is exactly the same as the original, with the only difference that it is set in Cm instead of C#m. This track is a challenge, even for the advanced guitarist.

If you thought “Since I’ve Been Loving You” has a fast chord progression, then the pace at which the triads in this song follow each other may feel like warp speed. Of course, nothing is impossible. Use the loop function and cut the song into pieces, it will become much easier to comprehend. Happy jamming!