After an energetic live concert we interviewed Cashmyra and Djai-Mac in our Chordify x IDK Studio at Eurosonic. Is being a virtuoso essential for playing in a band? How do you write songs? And why is front woman Cashmyra, in her own opinion, a failed bassist?

I saw a plethora of pedals at your feet. How do you tell them apart?

Cashmyra: They’re arranged in a clear order. The chain starts with a tuning pedal and ends with a reverb. Then there’s a range of pedals in between, all with slightly different sounds.

Two overdrive pedals, two fuzz pedals; all with their own character. As long as I remember which pedal belongs to which song, it will be okay.

And how many songs are there in total?

Cashmyra: About fourteen. It’s fine, my memory is in good health. Besides, my phone’s full of pictures showing the settings.

“As soon as you find the sweet spot, take pictures of your effects pedal and amp.”

Smart thinking, I can imagine that’s important. Would you say that’s good advice for other musicians?

Cashmyra: Definitely. As soon as you find the sweet spot, take pictures of your effects pedal and amp.

Do you have a favorite effect?

Cashmyra: Yes and no. I bought a Red Panda Particle a while back; an outlandish delay pedal that produces weird trippy sounds. It’s rad, but I only use it in one song. I should use it more often in the future.

Is it because you’re still finding out how it works?

Cashmyra: Yes that too. From time to time I’ll be in the rehearsal space … [frowning]: What does this pedal do?

You two sound very solid on stage. Is it easier rehearsing with two people than with a bigger band?

Djai-Mac: Yes. Democratically it’s very simple. There are only two opinions to deal with. We haven’t clashed yet.

How long have you been playing together?

Cashmyra: Almost a year. We’ve been together since March 2019. 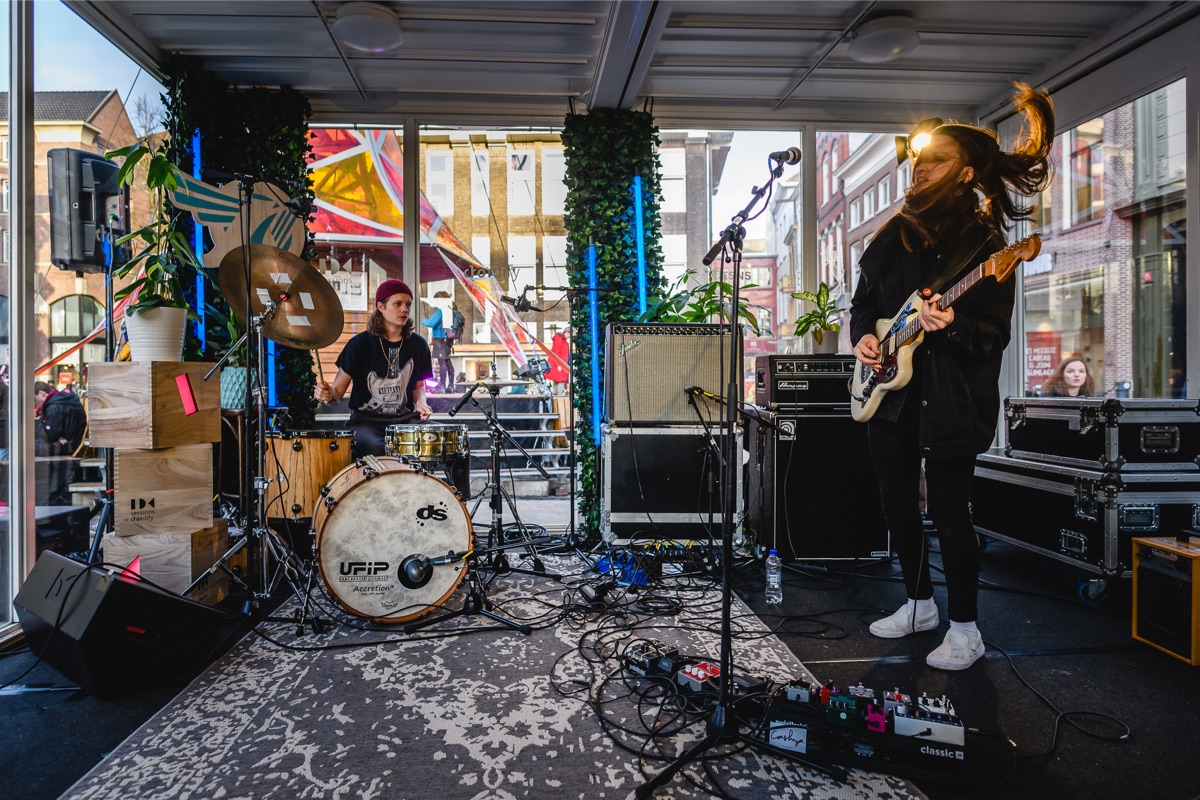 Cashmyra: Yes. And we’re going to record next week in the It’s Bear! studio.

Can you explain the songwriting process?

Cashmyra: I’m still a singer-songwriter to a certain degree. I’ll write the basic outline of a song on my acoustic guitar at home on the couch. Then I’ll take it to the studio, cover it with loads of distorted guitar sounds, and let Djai-Mac do whatever he wants on drums. [Laughs] And if I don’t agree with what he did, I’ll tell him; and that goes the other way around as well. That’s the process more or less.

Djai-Mac: Cashmyra will come to the studio with about 80 percent of a song. The structure of the song can still change because she writes solo. If it doesn’t work we rewrite it.

How much do you write together, Djai-Mac?

Djai-Mac: It often happens that we add a drum track to a song, and then it doesn’t sound right. We’ll look at it together to try and find a solution. For instance, by aligning a riff more closely to the beat, by trying a different vocal timing or by leaving out certain notes; that kind of stuff. But I won’t rewrite guitar parts for her.

“Pentatonic always fits, that’s why I write my riffs that way.”

Cashmyra do you have a prefered key or go-to chords that you like to use when you’re writing?

Cashmyra: I’m always joking about being a failed bassist, who’s playing guitar. I never play any complete chords, only power chords; and the rest is riffs. My riffs are mostly pentatonic, because I never learned how to correctly play solos in the right key on existing music. Pentatonic always fits, that’s why I write my riffs that way.

You’ve chosen to sing in Dutch. Why?

Cashmyra: I think a lot of people will be pleasantly surprised that I’m doing this. The lyrics have a more direct effect and I find that really satisfactory. Of course, the chances of ending up in an international playlist on Spotify are much slimmer. But, for me, that’s no reason to change to English.

Last question. Do you have any tips or tricks for beginning musicians?

Djai-Mac: You can stick a lot nice notes together, but if there’s no idea behind it and it doesn’t match with who you are, you should ask yourself if it’s any fun and whether or not you can deliver it to your audience.

Cashmyra: Yes. Not everyone has to be an insane virtuoso to write songs and play gigs. If you can find your own style and your own strength, you can write really awesome songs.

For me it’s minimalist riffs. I’ve never practiced any complex Hendrix solos and I don’t intend to. The good thing is that I won’t be confronted with not knowing how to play something like that. Turn your weakness into your strength.

That is a beautiful closing statement. Thank you Djai-Mac and Cashmyra!

Backstage with together PANGEA about practicing,…
Phil Spector - father of the Wall of Sound and…