Basic chords are easy once you know how to play them. But the process of learning them can be painful and annoying. That’s why we’re going to break down the information in three simple steps. This way you’ll learn how to play a G chord in no time!

We already taught you how to play an A, Am, E, Em, D, Dm and C. Well there aren’t many basic chords left except for the F and the G. This article focuses on the latter. Now before we start, please make sure your guitar is within range; you’re going to need it. If you start having sore fingers during practice, please read these helpful tips for blister prevention.

Let’s start at the beginning. You can’t play an instrument without tuning it first; a guitar is no exception. So grab your axe and make sure it sounds crystal clear by reading our blog post with tips & tricks for tuning your guitar. For a standard tuning you can use a tuner or an application like KARANG.

Step 2 – Take a look at the G chord diagram

Step two is understanding the chord you’re going to play. Let’s take a closer look at the G chord diagram, shown in the picture below. The vertical lines represent the strings, from left to right, E, A, D, G, B, e (strings are counted from bottom to top, so the high e is the first string and the low E the sixth). 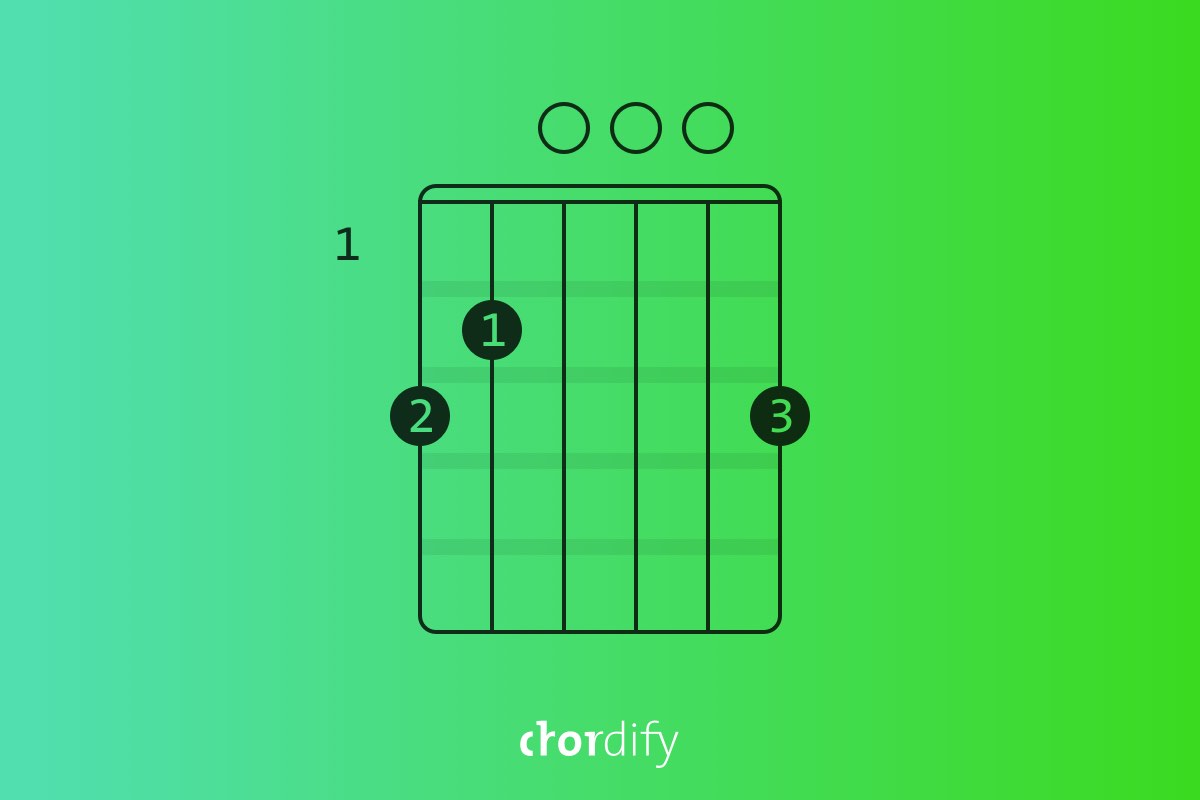 You can also see transparent circles at the top. These indicate the strings that you have to play open (without pressing them down). The number 1 indicates the location of the chord, this way you won’t get lost. As you can see, the G chord is played at the top of the fret board.

The numbers in the thick black circles show the position of your fingers. Take a look at the picture: 1 indicates your index finger, 2 your middle finger and 3 your ring finger. So far so good, don’t you think? Shall we try and play the G chord?

No rush, we’ve got all the time in the world. Before actually playing the chord you’ll have to take another good look at the diagram and position your fingers.

Start off with your ring finger on the first string (the e string) third fret. Your middle finger goes to the third fret of the sixth string (the lower E string). After you’ve placed your index finger on the second fret fifth string (the A string) you are able to play the G chord. Stay in position, firmly press all strings, and give the chord a good ring.

That sounds nice, doesn’t it? Oh yes it does! You can congratulate yourself on acquiring a new skill, playing the G chord. So what’s the plan now? Are you going to strum this chord until your fingers start bleeding, or do you want to know a bit more about what you’re actually playing? The choice is yours, we’re not judging.

You’re still here! A true die hard, aren’t you? This next bit of music theory can get a bit bumpy so grab on to something. The information is simple but dense. First off, each basic chord consists of a number of basic elements: the root, the third note (third), the fifth note (fifth) and the eighth note (octave).

The octave and the root have the same name, only they differ in pitch. The fifth is said to provide the power in the triad by supporting it harmonically. The third indicates whether a chord is major or minor. This says something about a chord’s mood — major often sounds cheerful and minor sounds sad or melancholic.

Now take another look at the G chord diagram. Which notes do you actually use from the scale? You strum G, B, D, G, B, and G   — so  the root, third, and fifth are already played on the first three strings. Makes sense, right? We also wrote a blog about more complex chord constructions. Is your head exploding from all the information that’s pouring into it? Relax, take a brake and play along with some tracks in G. The rest will come in time. Happy jamming!