Singer-songwriter John Moreland flew over from Oklahoma, especially for TakeRoot festival. After an intense show in the main hall of Dutch venue De Oosterpoort we had the pleasure of speaking to him backstage. Read all about John’s favorite chords, his first guitar, and the music industry. 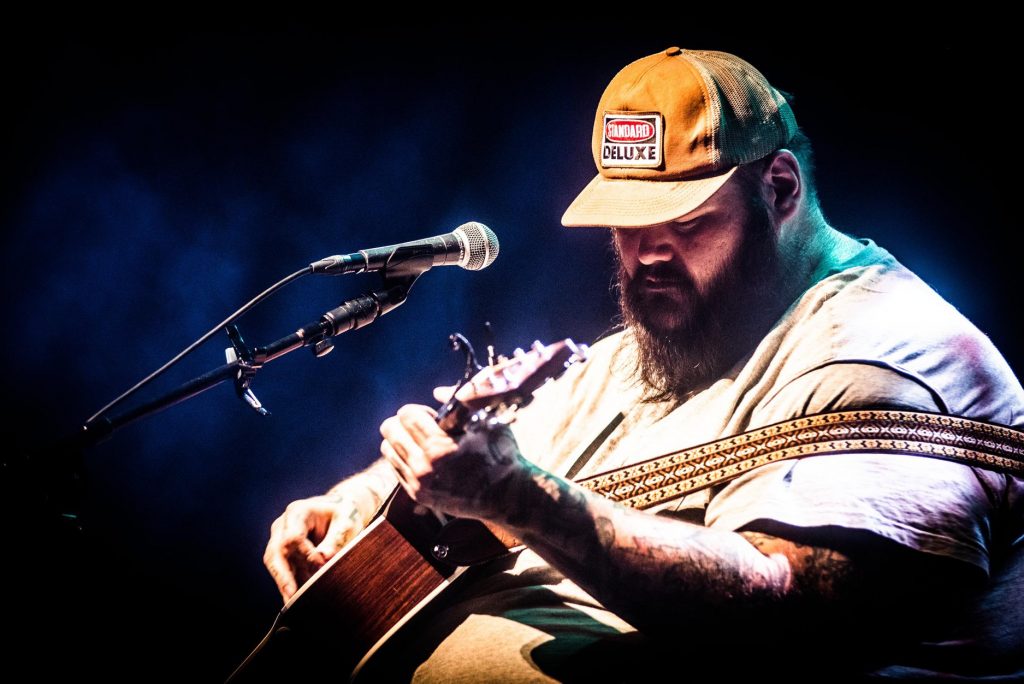 John, you flew all the way from Oklahoma just for this show. That must have been a hell of a ride …

It takes like three flights to get to Oklahoma, but Bobby and I are flying to New York and drive back home. I don’t really like planes that much.

After all those years of performing are you still getting nervous before going on stage?

Do I get nervous? Well sometimes. It depends you know. Tonight I was a little bit nervous. If it’s a nice chill environment, I tend to be more relaxed. Sometimes I get really nervous for no reason. As I said it depends.

Do you have a ritual to relax before going on stage?

Yes, I guess I started on guitar and pretty quickly after that – within a year – I switched to bass. So I played bass for a serious amount of time, around three or four years. After that, I went back to playing guitar again. So technically speaking it’s my first instrument, but I was a serious bass player before I became a serious guitar player.

Why did you switch in the first place?

I wanted to start a band with a friend of mine. We both played guitar and pretty quickly we decided to look for a drummer and a bass player. We found the drummer, but there weren’t that many bassists around. So eventually, I decided to pick up the bass myself.

What are your three favorite chords if you had to choose?

I went through a phase where I really wanted to be a piano player, not that I was good at it or something, but I played it. Then I tried to write songs on the guitar like it was a piano using the shapes and the variations of chords. That’s why I love the seventh chords.

No, but I remember it vividly. It was a guitar from a series catalog and it had a little amp in the body. So you just put up the volume at ten and start jamming. I got it for Christmas when I was ten. It sounded crappy, but at the same time, it was cool to learn on it because it sounded like a real electric guitar.

And then I got my first real guitar – a Fender Stratocaster made in Mexico – and when I hooked it up to an amp it didn’t sound electric at all. Then my dad taught me all about adding gain and using the equalizer. He’s an engineer and builds amps for fun. My brain doesn’t work like that at all, I don’t understand half of what he’s talking about when he’s explaining. I just play on the things.

So your dad builds his own amps. That’s pretty cool. Has he ever build an amp for you?

As a matter of fact, he has. Yeah, he built one that I used on the last album I made. It sounds like a tweet-style Champ. It’s not like a combo or anything, but just the amp and the chassis. So you see tubes and wires coming out and stuff.

And now he’s working on a Blackface Princeton Reverb copy. I have a Silverface so now I’m like waiting for him to finish the black one so I can borrow it.

You have been in the music industry for quite a while. What do you hate most about it?

A lot of stuff, I don’t know. Just kidding. I hate phony shit and people blowing smoke. Sometimes you get your ego blown up and it’s not easy to stay balanced. You have to learn not to always believe what everybody is saying because sometimes people say things they don’t mean.

I don’t want to make it sound horrible and I’m really lucky I get to do this. I just want to try and write honest songs that I can feel and that kind of resonate with me. So I keep that as my focus all the time and there’s a lot of things and people that can kind of steal your mind away from that with making promises they can’t keep and as I said inflate your ego. So you have to learn to stay balanced.

As a writer, I write stuff and put it out there. I rarely get to see the impact of my work. But as a musician, you write and perform. So you see first hand what your songs do to people. Which part do you like most?

To be honest I like the production the most. That’s the part that comes after the writing of the songs when you go into the studio and record them. As far as the performance part goes I don’t really look at the audience when I play.

Sometimes after the show Bobby will come to me and say: “Wow, did you see the crowd when you played that song man, they went wild.” Turns out I didn’t. But it depends on the venue as well. If it’s big I see people more like a group. If it’s intimate I have more contact with the audience.

So one last question before we leave you guys. Do you have any advice for beginning musicians?

My only advice is that you have to do the thing you love and you have to do it a lot. So write a lot, play a lot, try to do as many gigs as you can. Just do as much as you can and don’t stop.

Photos by Knelis made at TakeRoot in De Oosterpoort. Did you miss John Moreland at TakeRoot? No worries, check his tour dates here.