In Part I of this lesson, we looked at memorizing chord progression roots in a theoretical and structural sense. In this lesson, we’ll apply that with some context by using guitar tabs to plot chord progression root notes. Since we’ve already used the keys of C and E for our examples in the previous article, I’ll use a couple of different keys here to show you how we might tab this out.

For the key of D we’ll only use one chord progression.

The position of all roots in the progression can be tabbed on both the fifth and sixth strings.

Now we can fill in the additional octaves, added underneath each root creating a dyadic chord.

These are the fretboard notes you’ll want to memorize, in relation to one another. Here’s the aforementioned tab with each root labeled. 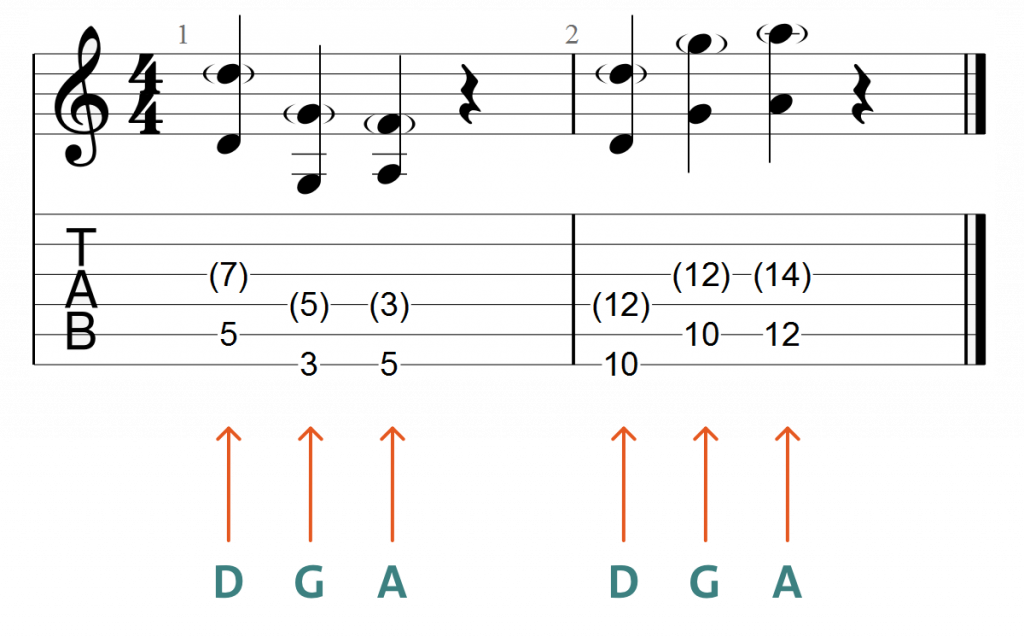 Key of A Example

For the key of A:

Notice I’ve taken the roots from two chord progressions, where there’s some overlap with the E and A chord showing up in both. That leaves us with A, E, Bm and D in no particular order. In all these examples, you could look at them as two separate three-chord progressions or a single four-chord progression.

In this case I’ve tabbed out the location of those four notes at two separate fretboard locations. 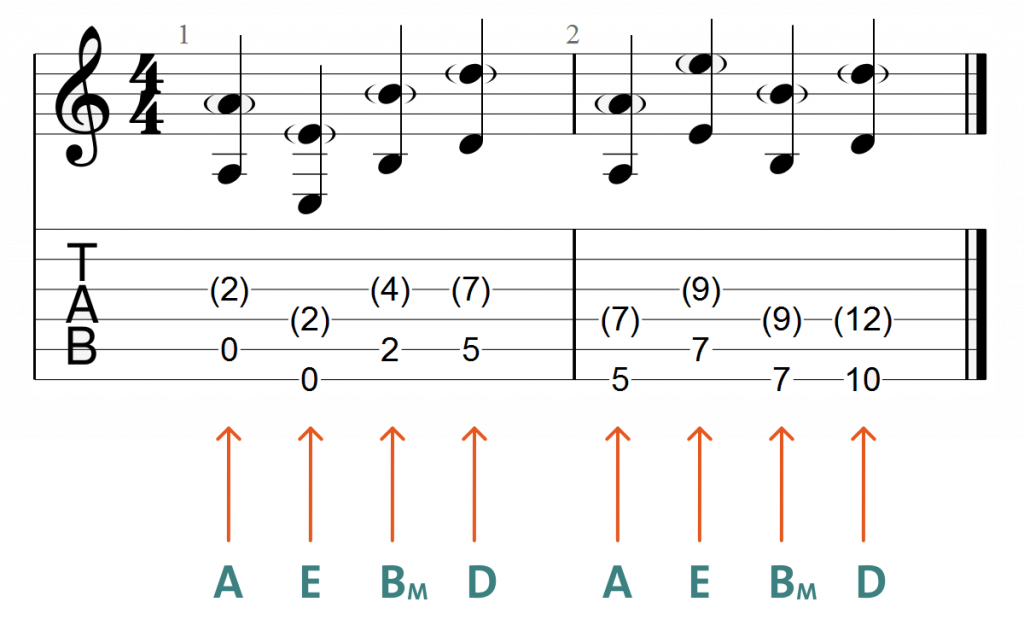 Now that we have a method and theory to back it up, we can work on refining our memorization strategy. While this approach will vary from person to person, there is a simple tactic that might help you visualize everything and remember progressions faster.

Each progression, being a grouping of three or four root notes, will be placed over a specific grouping of frets. This means your first and best memorization tactic will be to focus on these groupings in relation to fretboard dots. 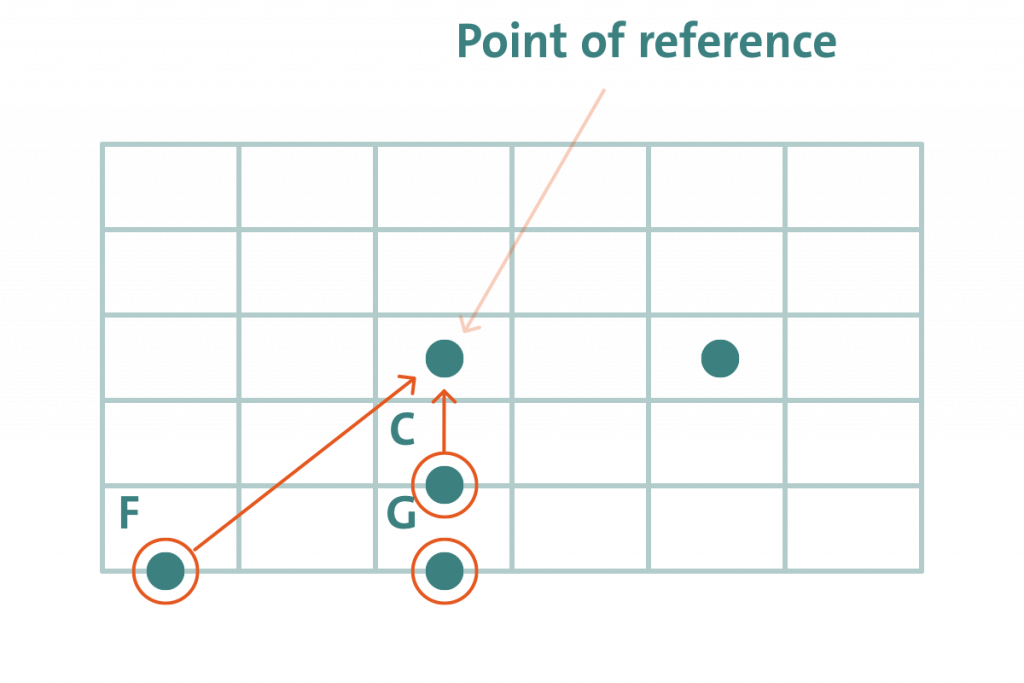 Your C, F and G progression can be most easily identified in relation to the dot at the third fret, where the root C is located. The same tactic can be applied for other progressions, depending on the root note’s location. 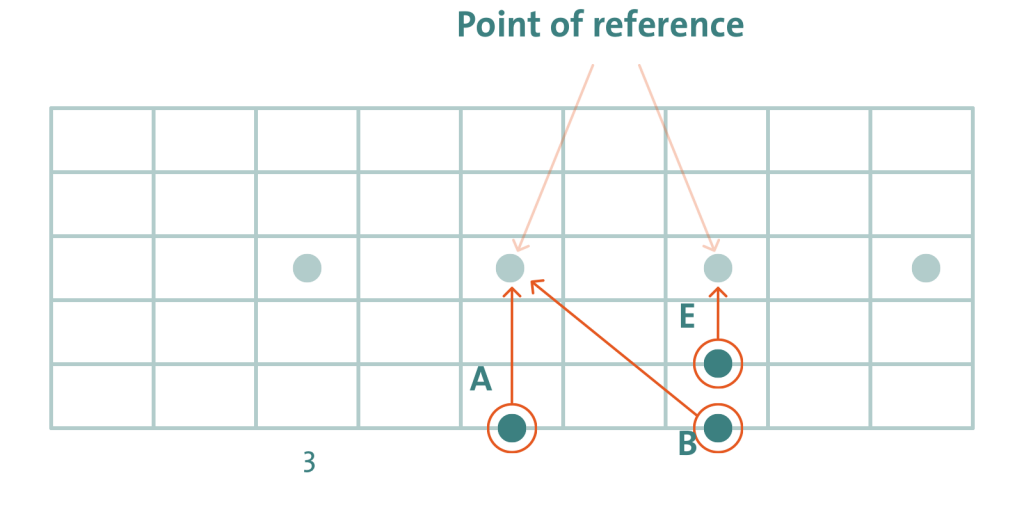 For the E, A and B progression, your point of reference would fall on either the fifth or seventh fret. Your memorization process would follow this pattern:

The dots on the fretboard are just an anchor to help you move more quickly to spots where your root notes will most commonly be located.

Concluding and following up

Once you understand the theory of chord progressions and keys, like we covered in Part I, it’s much easier to understand it in the context of tablature. This makes it easier to memorize where certain chords are on the fretboard and helps you establish reference points for when you need to play in a particular key.

Bobby is Guitar Chalk’s founder and a contributor at Guitar World and Guitar Player. He has also developed content for PRS, Seymour Duncan and IK Multimedia. You can hit him up on Twitter or shoot him an email to get in touch.

Chord progression of the month: I-V-vi-IV
How to play 12 minor chords with just one chord…