The Detroit Cobras recorded their first single in 1996 at Sympathy for the Record Industry. They’ve been playing their own style of garage rock ‘n’ roll with a Detroit silver lining ever since. In their own words: “Sesame Street in trash cans.” Want to know how they do it?

How is your tour going so far Mary?

Good, good. Yesterday we were in The Hague. We’ve been to London. We played a show in France in a place I can’t pronounce the name of. [laughs] Overall, we’re very bad in geography.

When I heard you were playing I looked you up and saw that the band is active since 1995. That’s a really long time!

My former roommate wrote the Wikipedia page on us, but his perception of when we started is a bit deformed. I guess he took the day we started talking about playing in a band as the day the band was formed, which is not entirely correct. So, it’s not 1995 but more like late 1996. 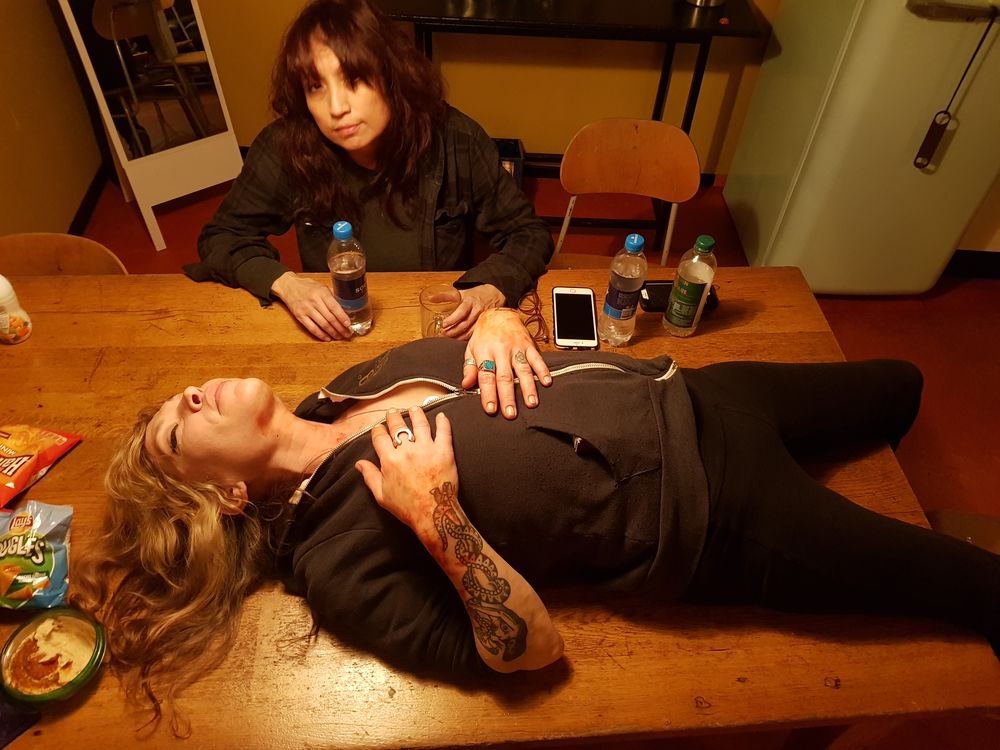 I do, but why don’t you explain it to our readers?

Sure, this is a record label which recorded a lot of bands where woman played in. If you had a girl playing along then Long Gone John was recording you. That’s Sympathy for the Record Industry.

So, you got to work with him?

Yes, we got to do an album in 1998. A year later we broke up. You know, it was all just too much. Around 2001 we got back together, recorded another album and started playing again.

If someone takes a look at your Wikipedia page the list of former band members is enormous. How come?

A band member could be someone who was around for a month. Like I said the guy who wrote this was my roommate and he kind of wrote everybody down as a band member even if that person just jammed with us a few times.

I thought Rachel was your roommate?

At one point Rachel came to live with us in this big building, a factory or something, which was made into a house. There were a lot of buildings in Detroit, especially in the time we were getting started, where you could do anything. And it was cheap.

Me and some friends, we got a big building across one of the clubs we used to play in. It cost us almost nothing. Now it resells like crazy, but back then it was a different story. None of us ever needed rehearsal space, there was plenty of it. We didn’t have to find it. Everybody just had a house.

“… we are trashy but we’re not the gods of thunder.”

Talking about rehearsal, what has changed since 1996?

So, who does most of the songwriting?

We do a lot of covers, but we’ve done some songwriting. We just did a song which was written by our drummer Kenny. It’s called “Stay Down.” So, on the single it’s us on the one side and him as an independent artist on the other side.

Rachel: And it’s really good. Of course, I made it way more evil. I told him: “Kenny you know I’m going to mess with this, right?” He was like: “Go for it!” He’s very talented, we love him and we love what he did with the track.

Mary: The track is about a woman telling her husband that if he doesn’t want her love he’d better stay down.

Rachel: Husband? Who said anything about a husband.

Mary: Sorry, am I projecting.

Rachel: [laughs] Yes you are.

Mary: Let’s continue because I have to start soundchecking in a minute or two.

Ah soundchecking, now we’re on that subject, what are some tips and tricks you would recommend our readers do?

Rachel: If you know your sound and the sound you want on stage there is something I do every single show. I tell the sound engineer, we are trashy but we’re not the gods of thunder. Do not turn up the subwoofers too much because we’re not looking for bombastic.

We want to sound more like Sesame Street in trash cans. But you have to express that in the right way. So, no reverb because I want to hear my voice very flat. When I suck, I want to suck on my own. But of course, if your sound is more pretty, then you have to ask for reverb if that’s your thing.

So just learn to communicate with the sound engineer?

Rachel: Yeah, that’s it. Hopefully you’ll have a good sound guy, who understands what you’re talking about. Sometimes that’s not the case and things don’t work out the way you want it. But we have a trick for that too. Just talk to each other as a band.

You don’t have to be turned up to eleven all the time. I know it’s hard, we all grew up as punks who wanted to play hard and loud. But I’m telling you man, there’s something about bringing it down where it’s not about blowing everyone away.

No, I’m not talking about smooth acoustic stuff. I’m just saying it’s okay to turn everything down a bit. Especially when your sound guy sucks, this works like a charm. But one thing is true for sure: having a great sound guy is like having an orgasm. Then you can go balls out and don’t have to hold back.

“… having a great sound guy is like having an orgasm.”

Mary: [laughs] Yeah, I totally agree with everything Rachel says. When you turn it down a bit the sound guy has to start listening and mixing everything so the people in de venue can hear you properly. Then he has to behave and give the people what they want.

But there is one more thing I would like to add to this. You are playing as a band. So that means you have to work together to get your sound right. Listen to each other. In my case the situation is that Steve takes the high register, I take the middle registers and the bass takes the low registers. Always remember: you’re not playing solo.

Rachel: There is something magical when everyone is in tune and at the right volume. I used to play in an orchestra and when all those instruments come together in perfect harmony the air above starts to vibrate. It kind of sounds like bees are flying over your head. Not killer bees, but really nice cuddly bees. [both start laughing]

So, our tips are to listen to each other while soundchecking, and if your sound guy sucks just help each other to bring the sound together in what you really want. You can’t be selfish – well I can, because I’m the lead singer – no random soloing, work as a team. When we are on stage it’s not Rachel and some snakes. No! We are The Detroit Cobras. We’re a union.

Do you have favorite chords or keys you like to play in?

Rachel: Yes, that is our sweet spot, and we also tune down a half step. So, the guitar and bass are in Eb. Which of course changes the keys we just told you, but we’re not getting into music theory right now. Just tune your guitar to Eb and play in G and C, that’s our sound.

Well, do you have three songs that reflect this sound and are something we could recommend our readers to play along with?

Mary: “Now You’re Gone.” But that one is kind of complicated though.

Rachel: Yeah, write that one down. The other one is “You’ll Never Change.” We love that song, and it’s still one of my favorite tracks to play.

And third and last song?

Rachel: “Out of This World” is a good one.

Mary: Yeah, it has some fast chord changes. It’s good for practicing basic chords and chord progressions. But now we’ve got to run for the soundcheck.

No worries! Thanks for having me and break a leg.