When we lower a pitch by a halftone it is called flat. As you can see in the pictures below, the symbol indicating a flat tone looks like a b. You can find flats also in chords. Take the chords Ebmaj7 and Eb7, for example, which are notated with flats.

Flat is the opposite of sharp, because sharp means increasing a pitch by a halftone, making it sound higher.

For the guitar or ukulele “halfone down” means going to the next fret, down toward the nut.

On piano “halftone down” means going down to the next key. Note, that it can be black key or white key (in case there is no black key).

For example, when you lower a D halftone, you’ll name it D flat, as shown in the picture below. Please note that Db equals C#. This special situation is called an enharmonic equivalent. 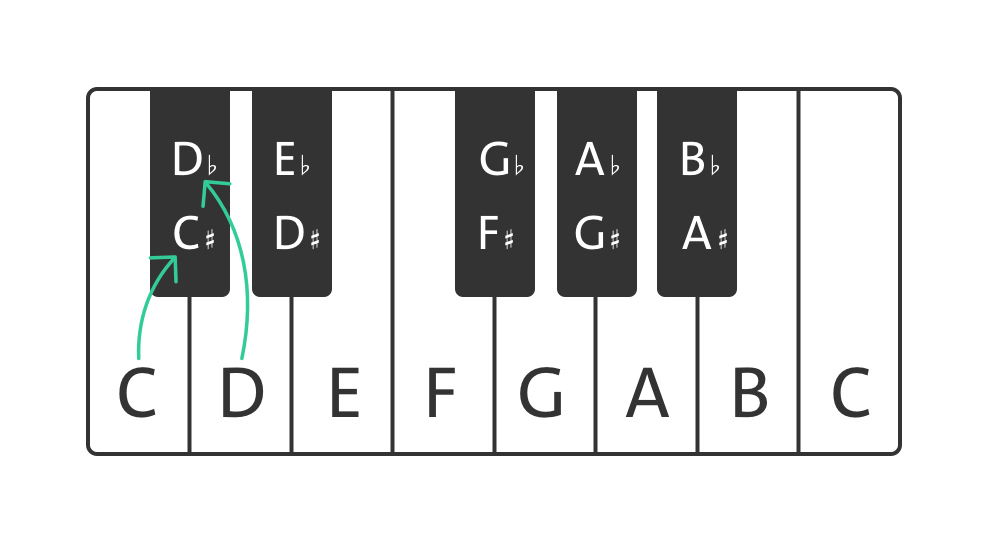 You can come across flats as key signatures at the beginning of your sheet music. Below you can see an example of sheet music with 3 flats. This means that all B, E and A notes need to be lowered by a halftone resulting in Bb, Eb and Ab.

If the flat symbol appears only in one bar, (as shown in the image in the second bar) the note D becomes a Db. Please note (!)  that this flat refers within this bar to all D notes of all octaves.