Singer-songwriter Albin Lee Meldau is known for his raw and pure sound. The artist is one of the winners of the Music Moves Europe Talent Award. Besides that, he also won the Public Choice Award for best singer-songwriter. 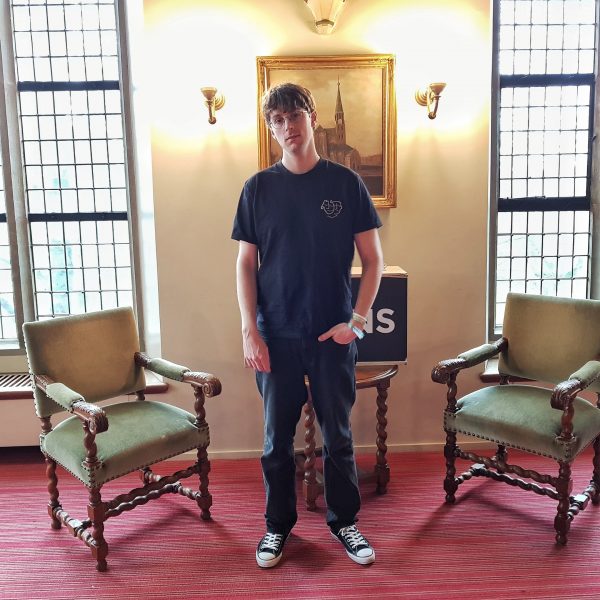 We spoke to Albin at Eurosonic about investing in music and arts, the sound of the stories you want to tell, and how making a song is almost the same as cooking a dish.

Hi man, how are you doing?

“Fine, thanks. And thank you for having me.”

No worries. Congratulations on your price. What does this achievement mean for your career?

“Well, thank you. I really have no idea how the Music Moves Europe Talent Award will affect my career. I deal only with the art stuff, my friend. The rest I leave to the professionals. But I have to say that it is always an honor to be awarded.

“You always have to work hard for your music and it feels good to be acknowledged for it. So I’m deeply honored.”

Cool! So Sweden is a Walhalla for popular music. A lot of good stuff comes from your country. Why is that?

“Walhalla? That is an interesting choice of words! Oh my God, it isn’t that violent. In Sweden, you don’t have to die first before becoming an artist you know. But you are right Sweden is crazy, man. Popular music is the seventh biggest commodity in our country.”

Wow, I know that Sweden is the third biggest exporter of popular music in the Western world.

“Well, that’s due to investments. Not to bore you, but since the end of the Second World War our government has been investing heavily in culture and music. So that is almost eighty years of financing that sector.

“We have ABBA of course and producer Max Martin. But mind you that nothing comes in one generation. Sweden has been working on this for a long time. They have done this for a very long time and I’m honored to be part of this. Also, I am proud of my fellow Swedes that travel the world with their music.”

Did music play an important part in your life while you were growing up?

“Yes. My mother is a music teacher and a singer, my father is also a writer and a singer. So I grew up playing the trumpet, singing in choirs, and playing all kinds of instruments.”

The trumpet is a hell of an instrument to play.

“Yeah, but I never came so far with it. I started singing and playing rock ‘n roll you know. But to come back to your question, I didn’t really have a choice when I was growing up. What I do now is a choice. But when I was a kid, playing music was part of my education. One hour every day or otherwise you get no food. You have no choice.”

Did you hate it?

“At times, of course I did! It was part of school. I’m very, very happy that they did push me to do it though. Because even though we in Sweden invest a lot in music, it is still not enough if you want to get somewhere with your art.

“The music education is for free and there are places you can play and compose music. Instruments are free at those locations. So there is no magic going on. Sweden is just investing heavily in creating a platform where artists can grow.”

“I love my country dearly. And of course it has its problems like any other country does. But when it comes to arts and music it prevails, because our government wants it to. As I already said a few times before: there is no magic, just the right investments.”

Your songs have a poppy side, but they’re also very raw. I see this trend also with other artists. Is pop finally getting its edge back?

“Thank you. I have to be honest that I don’t know anything about what other artists are doing. So I can’t say if this is a trend or not. But I can tell you where I get my edge from. I listen to old music like Bob Marley and The Wailers, Jimi Hendrix, John Lee Hooker, old stuff you know.

“Also classical music and jazz inspire me a lot. So I don’t really know what is happening in the world of music nowadays, I just know what I like personally.”

But you won a pop award, but you do not make average pop music.

“Oh you mean if the industry is getting its edge back? Right. This changes up and down, you know. I don’t think I can explain the trend. All I know is that what I do I need to do it. It is an urge that comes from deep inside of me. I have to do it like sleeping and eating, otherwise I’ll die.

“What it is and is not for the industry, well I can’t say. I thank the Lord that I have the opportunity to be modern at this moment in this time and age. But if I wasn’t, my music would still be the music I make now. You have to believe in what you do and do what you believe in no matter what.”

You don’t try to make your songs sound slick. That makes them sound raw and pure.

“It depends on what story you want to tell. Some stories are slick, but those are not the stories I’m telling. But you know some songs you can whisper because the track needs that whisper. Other songs require a moan or a yell. As I already said: what are you trying to get across?

“Songwriting is like cooking and that makes me the chef. Sometimes I make an Iranian dish with saffron, another time I make classical French food. Music is just like food. It has different spices. So a good chef needs to know what he’s working with and what that dish requires.”

Do you have favorite chords or keys you use to spice things up?

“I play the guitar as my composition instrument. So depending on what I want to do I use different styles, but open chords are my favorite. I haven’t got one or two chords I prefer. As long as they’re open I like the fullness of the sound. But now we’re talking about it I think F is a good key for me to work in. But then again, I don’t think about it like that.”

You’ve been in the business long enough. What is the advice you would give a starting musician?

“I have come to a point that I can make a living out of music. I get to travel the world and do what I love most. But all that stuff doesn’t matter if you’re health is bad. So my advice to all you starting musicians out there is: take good care of your health. Because without it all that other stuff is insignificant.”

Wise words. Thanks Albin and until we meet again!