There are men who like to blow things up and then, to calm the mood, sneakily grab their guitars and sing sweet juicy tracks. And there are also women who, in addition to playing Oscar-worthy performances, like to sing off the hustle and bustle of the day. Are they film divas or rock-‘n’-roll power ladies? What does it matter as long as they rock?

Actresses who are gifted with silky smooth vocal cords; yes, they exist. But do you know who they are? No? That’s why we’ve selected four film divas who have rocked the stage, so you can impress your friends with some unexpected jams. 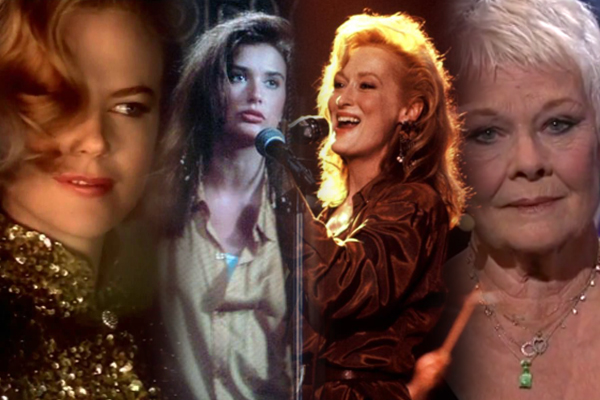 We know the song “Something Stupid” by Frank Sinatra and his daughter Nancy. But pop star Robbie Williams did it all over again with none other than Nicole Kidman. You might know the red-headed diva from films like “Eyes Wide Shut,” “The Golden Compass,” and, recently, the series “Big Little Lies.” So grab your brother, your cousin, your lover, or best friend by the collar and get into rocking position. It’s time for a duet written in G major.

To understand this track, you need to know the scale of G. This consists of the notes G, A, B, C, D, E, and F#. As you can see, the song consists of only six chords, the rest are variations. For the beginner it is useful to press the button ‘Simplify Chords.’ This way everything becomes a bit more simplified and clearer.

You would have to be a rock star to maintain a relationship with mister Die Hard for years. Whether Demi Moore has a “Don’t Look Back” attitude towards that period in her life we do not know. What we do know, is that this film diva is a tough rocker. This is evident when you hear the track she recorded for the film “One Crazy Summer.”

The track is written in the key of C with C, D, E, F, G, A, B in the scale. Variations on five of these notes are repeated in chords in the track. If you like a challenge then you try the chord progression as it is. Are you a beginner? Then use the ‘Simplify Chords’ button in the upper-right corner of the diagrams screen.

“Send in the Clowns” is something a queen would shout when she gets bored. Dame Judi Dench is in many aspects a queen or someone who can play the role of queen like no other. We saw her shining as Queen Victoria in “Victoria and Abdul” and in “Mrs. Brown.” The role of Queen Elizabeth I in “Shakespeare in Love” even earned her an Oscar.

We didn’t know that this film diva can sing like a nightingale until she opened her mouth during BBC Night of the Proms in 2010. One of the songs she sang there is this one. Written in the key Db – with the tones Db, Eb, F, Gb, Ab, Bb, and C in the scale. Check the chord progression and don’t let the barre chords discourage you.

If you are on the road a lot, you often say “I’m Checking Out.” From now on you can also jam this phrase. Try it when you walk out of a hotel and let us know the bellhop’s reaction. Do you think the first thing they think of is Meryl Streep when you burst into song?

Meryl’s track is written in D, and the scale consists of the notes D, E, F, G, A, B, and C. This track also contains a lot of barre chords whose mastery requires some practice. If you want to make it easier for yourself, you can. Place the capo function on the fourth fret and enjoy. Happy jamming!