Ever heard of Suomenlinna? It’s a Finnish island that lies only fifteen minutes from the coast of Helsinki. Sometimes people refer to it as the Gibraltar of the North. So, you’re wondering why we know all this? Because pop star Lxandra, winner of the Music Moves Europe Talent Awards, comes from the island. 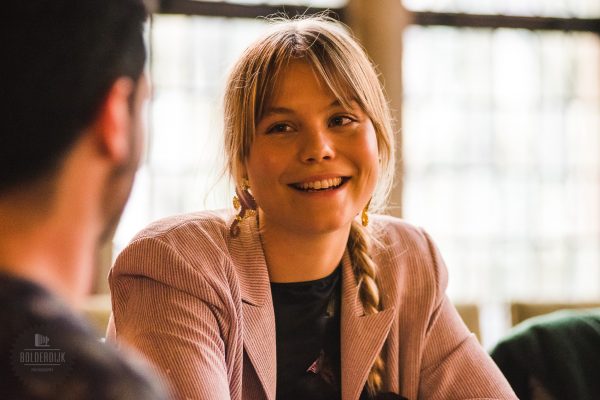 The young artist left for Berlin when she was nineteen and developed her own raw and melancholic style, which won her the prize for up-and-coming talent during Eurosonic. We spoke to Lxandra the day after the award ceremony.

Did you celebrate last night after the awards?

“No, not really. I’m doing a hundred days without alcohol challenge. I started at the beginning of January, so I still have a few weeks to go.”

What kind of an impact does winning such an award have on your career?

“I don’t know. For me, it probably just means that in my mind I’m triggered to work harder even. Because when you get something like this you want to also show that you deserve it. I have only three songs out, so now my motivation and productivity are even bigger.

“In other words, it’s amazing to be awarded. I’m really really grateful and a bit blown away, to be honest. I didn’t expect this, so that makes it even better.”

Your music is poppy but also edgy. I was talking to Albin Lee Meldau about this too and I was wondering if pop music is finally getting its edge back. What do you think?

“Maybe, I don’t know. But I really hope so! I mean everybody has their own edge and there’s been a certain kind of style for some time. What I can say is that I play the kind of music I like and I always liked that kind of music. So, I’m happy that this sound is hitting the mainstream again.”

Which artist inspires you?

“I listen to all kinds of music, but recently I listened a lot to the new Lykke Li album. When I was a teenager alternative rock was more my cup of tea, so I still go back to that sometimes. Artists like Bon Iver and Coldplay inspire me, but of course also strong voices such as Sia and Adele.

“It also depends on the mood I’m in. Sometimes I really want to listen to some crazy over-the-top pop music. Other times it’s a sad song that rocks my boat if you know what I mean.”

You’ve said more than once that it is hard to be a woman in the music industry. What has to change to make this better?

“I think that it’s good that there are people like Lady Gaga who speak out loud about these things. And of course, when we hear about the stuff that happened to artists like Kesha it’s good that people are starting to take discussions about sexual harassment in the industry serious.

“I have been fortunate not to experience things like that. But it’s still a bit hard to really get taken seriously in the business. Which is maybe the first step towards change.”

Do you have an example of not been taken seriously?

“There was one time that a guy came to me after a gig – it was before my career took off – and he started talking to me about my approach to a future in music. When I told him what I wanted to do he just nodded his head in disapproval and started explaining to me that my approach wasn’t the way it was done. I calmly told him that this is my way of doing things and then he got really offended and angry. In the end he walked away.

“This is just one example but it shows that people don’t take you seriously as a woman when you are talking about serious things like a career in music. I have experienced that in such cases men – mostly older men – stop listening and start explaining, because they think you just don’t know what you’re talking about.

“So I think a good step forward will be that people like that learn to step down and listen to what the other person has to say and try to understand that even when I am just a twenty-two-year-old girl I just might know what I’m talking about.”

Do you have favorite chords or keys you like to fall back on when writing a song?

“Well I really like the chords that are in my song ‘Flicker.’ I know they are standard pop chords which you can also find in the Rihanna song ‘Stay,’ but I love them. I’m talking about the C major, D minor, E minor, G major, and F major. I have to admit that I’m not very good at music theory. I just play the chords that sound good.”

If you can give a piece of advice to starting musicians, what would that be?

“Be yourself and just keep on trying! Don’t stop after a few failures. Try something at least ten times before giving up. Also surround yourself with good, hardworking and honest people that support you. And of course, don’t forget to take care of yourself and your physical and mental health.”