If there are two things on this planet we love – and you might already have guessed this – it’s music and technology. So while gearing up for an adventure to the San Fransisco Bay area gets us pretty excited, welcoming Marcus Henderson to the Chordify team while we’re out there makes us positively ecstatic. As the guy behind a lot of the great finger-licking pickings on the award-winning Activision series ‘Guitar Hero’ and ‘Rock Band’, he knows a thing or two about the crossroads between music and technology. So this trip should be something special! 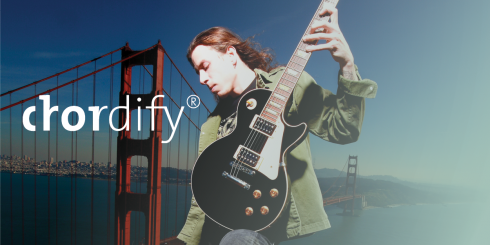 Besides teaching us the tricks to shred our favourite songs, Marcus also designs guitars over at Epiphone and is an honorary COB at Little Kids Rock, a US-based music education charity. He seems to have a finger in just about every cutting-edge pie in the gamified music business and he’s going to be helping Chordify expand on this frontier. With his sound expertise and extensive network, Marcus will be a major addition to the Chordify Team. And if meeting one of the coolest guys on the planet wasn’t enough, Marcus has also put together an all-star tour where we will get to rub shoulders with some of the talented folks at Apple, Pandora and Electronic Arts (EA), to name just a few.

This trip won’t just be fun and games though, because it’s all part of our goal to become the world’s leading platform for learning and playing music and teaming up with Marcus and his team of musicians is the next step in this ambition. So be sure to check back for more on our media tour and meet up this week as we start our collaboration with the one and only Mr. Guitar Hero.