The heavy-metal heroes from Anvil played an awesome show at Das Oktober Metalfest in the Klokgebouw Eindhoven. Before the show we had the chance to talk with lead singer and guitarist Steve “LIPS” Kudlow about his favorite riffs, his first guitar, and Anvil’s new album.

After walking in circles for half an hour surrounded by metal fans dressed up in lederhosen and dirndls holding beer mugs with skulls on them, we finally found the stage where LIPS was waiting for us.

The Canadian heavy-metal icon is enjoying “Dallas 1PM” by a Saxon cover band – flown in by the organisation after the real Saxon cancelled their show due to frontman Peter “Biff” Byford’s health problems.

Hi LIPS, how is it going?

Great! I was just texting Biff that there’s a Saxon coverband playing.

Yeah, we heard that Saxon had to cancel the show because their frontman had heart problems.

He’s doing much better now. He sent me a photo on which he has a lot more color in his face than before the operation. Triple bypass, that’s no joke you know.

Good thing he’s recovering okay. But how is Anvil doing?

I thought you guys were touring, but you came over especially for this gig?

No, we actually played in Germany yesterday. After finishing our new album – that will be out on February 14th – we booked two shows. One was in Leer – which was amazing – and one today. We’re leaving tomorrow.

So what can we expect from the new album?

It’s just another Anvil record. What can I say more …

Did you try doing some new stuff on this album?

No! Why would I do that? I want to keep my fans, I don’t want to chase them away. Here, have something different you won’t like. Because you know what? Different means they won’t like it. You don’t want to go there man.

And why would I, it makes no sense at all. I’ve been doing this 42 years man. I haven’t changed in that time, so why should I start doing that now? People know what Anvil is and that’s what Anvil is. 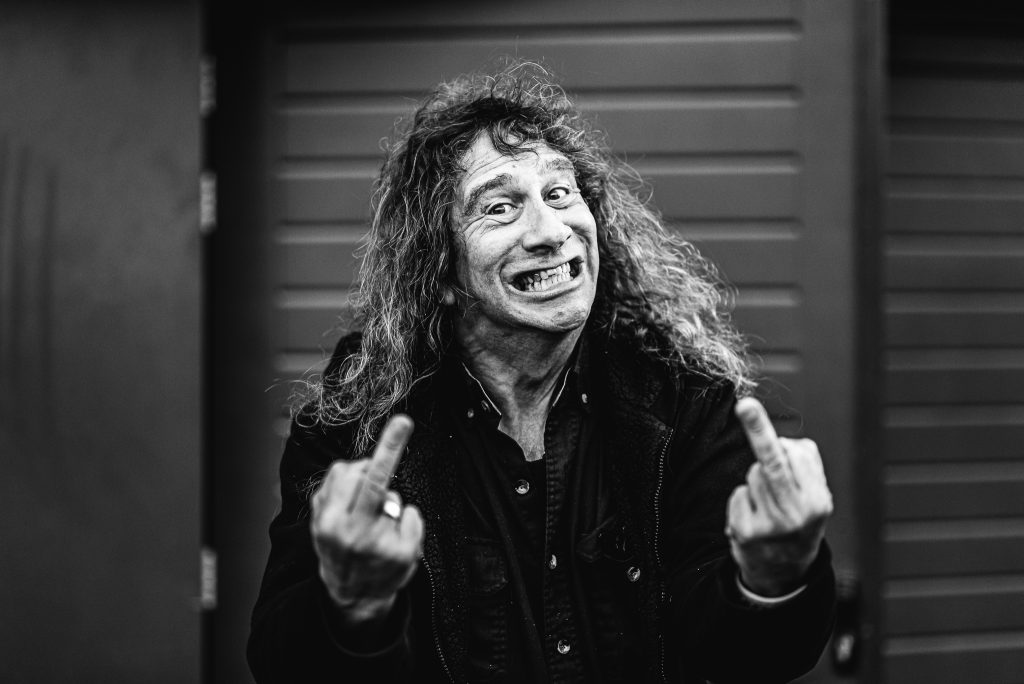 Where did you record your new album?

At the Soundlodge studio in a town I can’t pronounce the name of [Rhauderfehn] with producer Jörg Uken. This guy is amazing. He’s not only a great producer but also an awesome drummer. This is the second album we record with him at the Soundlodge.

When you started out playing guitar, what were the first chords you learned?

The first chords I learned?! [Thinks for a while]

The E chord, the A chord, and the D chord.

And are those you’re favorite chords?

Okay, let me rephrase. Do you have favorite chords or keys you like to fall back on?

[Laughs] E! E is a pretty common key and probably half of our songs are written in it. But the guitar is tuned in E, so … If I played a tuba maybe I would compose more in the key of C, but I don’t. I play guitar.

Do you experiment with different tunings like drop D or tuning the whole guitar to Eb?

We did in the past. [Sighs] It becomes redundant, I don’t believe in tuning your guitar down. I know that the human ear does not work well with lower register notes. So when you tune your guitar to lower keys like Eb, C, or even B the tones of the riffs become harder to discern.

You can’t play melodic riffs in lower tunings, because of that. Look at death and doom metal, there’s hardly melody in those songs. There’s nothing to sing to. It’s mostly rhythm based, and that’s okay, but that’s also why Anvil songs are in standard tuning. [Smiles] I’m from the old school and I won’t change.

My first guitar! Man, no. Hell no. Long gone.

Do you remember what kind of guitar it was? 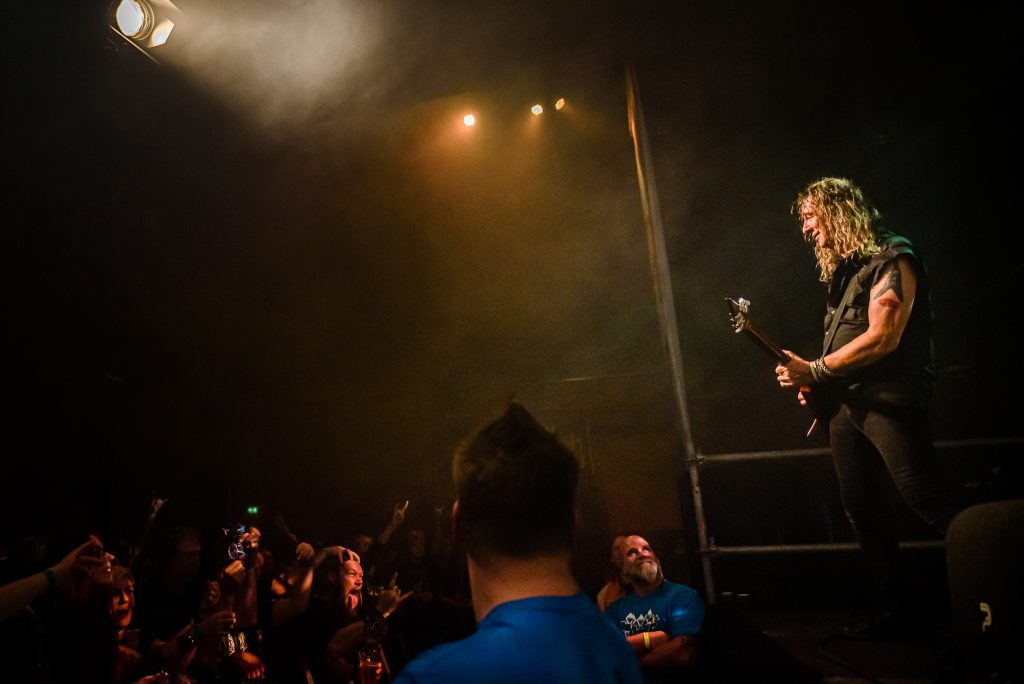 What happened to it?

You know what? It’s so long ago that I really don’t remember. I guess I tried customizing it, trying to improve it. Of course that didn’t turn out the way I planned, and I wrecked it. I was a kid, I didn’t know better. It would probably be worth a few thousand dollars today if I still had it but … Long gone.

Do you remember the first riff that got stuck in your head?

Yeah, the “Satisfaction” riff by the Rolling Stones. That’s the first metal riff of all time by the way. [Sings the riff with a big smile] And it’s even distorted.

I always learned that the first heavy-metal riff is in “Helter Skelter” by The Beatles.

If you could give beginning guitar players a few tips, what would those be?

Well there isn’t really any tips. You got to go at it. And the most important thing after that is the way you play the guitar. You really have to do it your own way and don’t try to copy other people’s style. And how do you find your own sound? Well, good luck finding out.

Which three Anvil songs would you recommend to our readers to play along with?

Try to learn to play “Winged Assassins,” if you can. Another good one is “Badass Rock ‘n Roll” or “Metal on Metal.”

We’ve arrived at the final question. What do you like most about your job?

That it’s not a job! A job is something that you have to do and you hate it. This is not a job and I love it. It’s not work. I’ve been retired since I was able to play music full time and had the chance to quit doing deliveries for the catering company I used to work for. So I’m retired and I’m feeling good!

Thanks LIPS! Have fun and kill it on stage.

We will, don’t worry.