Do you want to play a B7 chord on piano, guitar or ukulele? You came to the right place. In this blog post we will show you different ways of executing this chord on your instrument of choice. Starting with chord shapes on piano, guitar and ukulele, and wrapping it up with some music theory showing you the basic elements that make up the B7. Ready to beef up your music muscle?

Main takeaway from this article

This article focuses on how to play the B7 chord on piano, ukulele and guitar. But that’s not all we want to show you. One of the main lessons is: There are multiple ways of playing the same chord.

The rules of music theory prescribe how a chord can be played; that’s why you can play around on the fretboard and behind the keys. First, we’ll show you three different ways of playing a B7 chord on different instruments—if you can’t wait, just scroll down and check out the chord diagrams. Once you’ve processed those, you’ll have a pretty good sense of how to play the B7 chord.

After that, you have a choice. Either you use your new knowledge and start jamming or, if you’re curious, read on to learn about the different inversions of the chord and a little music theory.

B7 chord on piano

There are many ways of playing the same chord. Just take a look at the chord diagrams below; these three figures represent the same chord. If you play them as a beginner, it’s very plausible to think that they sound different. But they are all variations of the B7 chord on piano. So, how is that possible?

B7 chord on piano

We’ll explain later. First, let’s take a look at the chord diagrams. Try it out on your keyboard and listen carefully to every chord. They all have this jazzy/bluesy vibe, don’t they? That is totally true because the B7—like most of the 7 chords—is used to give songs a warm, dreamy, melancholic feel. Check out our “Songs Explained” series with “Everything I Wanted” by Billie Eilish; that track is living proof of how dreamy 7 chords can get.

On ukulele the B7 chord looks like this: Position your index finger on the second fret and barre all four strings; after that, position your middle finger on the third string third fret. Well, that’s what a B7 chord sounds like on the ukulele.

But what happens when we finger the second, third and fourth fret starting at the second string? Check out the second chord diagram below and don’t forget to play the first open string too. It may sound a bit different than the other chord, but this is also a B7 chord. 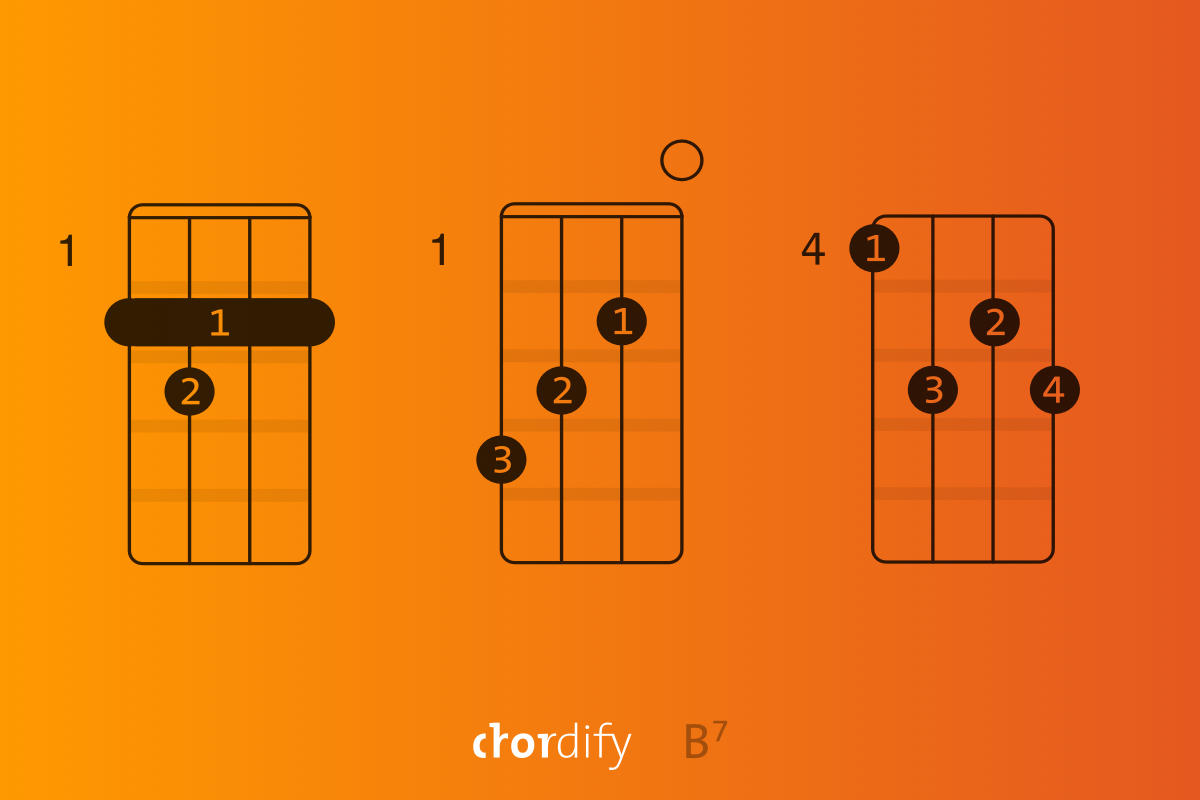 B7 chord on ukulele 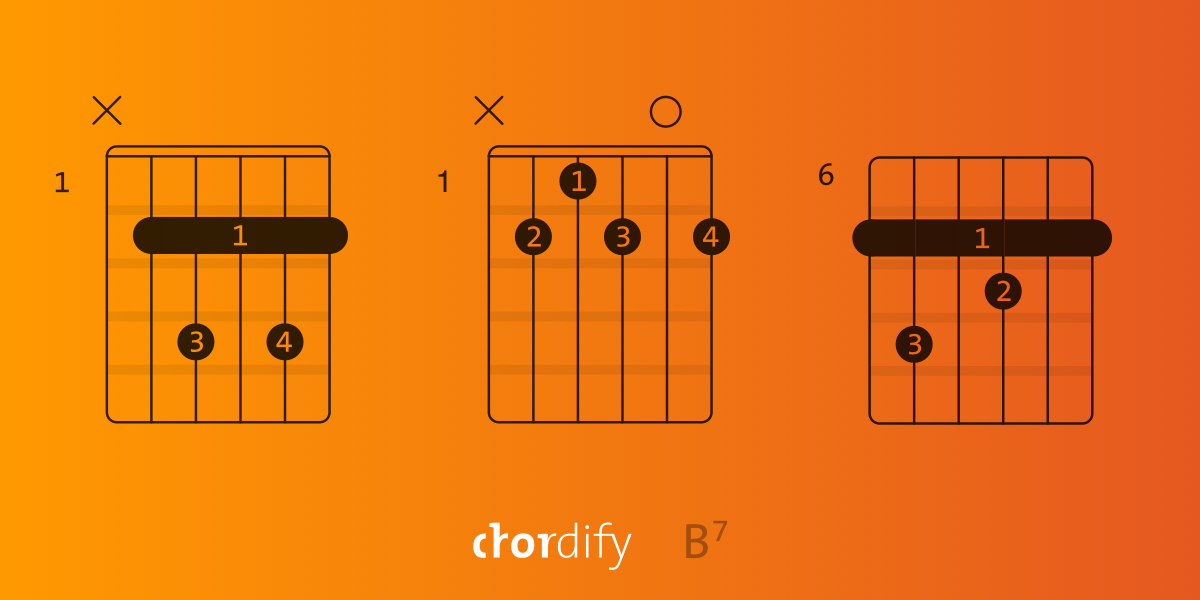 B7 chord on guitar

The first chord diagram shows the B7 barre chord. In a barre chord you use one finger to press down more than one string on one fret—as you can see, this is the case in the first and third chord diagram. The second representation of the B7 is an open chord. Try them all out and feel the vibe that connects them.

Why can we play the B7 chord in so many ways?

Isn’t it interesting that we can play the B7 chord in a lot of different ways on all three instruments? It reeks of magic. Think about it for moment, all those chord shapes have almost nothing in common, and they still represent the same chord. Without a well-trained ear, you could mistake the sound of one shape for another.

So, let’s hop on this roller coaster of music theory, shall we? Here’s why you can play the B7 chord in different ways without making it sound totally different.

Music theory behind B7

Do you remember the skeleton for basic chords? Need to brush up? Read our blog “How to play a B chord explained in three simple steps.” Right, the skeleton consists of the root, the third and the fifth. In our case the skeleton is: B, D# and F#.

To make the chord “spicier” or to “broaden” the sound, we add the seventh—the seventh note of the scale. The skeleton now consists of four notes: B (root), D# (third), F# (fifth), A (seventh)—remember this order by the way. These are the exact same notes that you play on piano, ukulele or guitar; as we already showed you in the previous chord diagrams.

When to use inversions

What kind of situations are we talking about? Simply put: Inversions are a great way of avoiding jumping around on the fretboard on guitar or ukulele. The same goes for the piano keyboard; you avoid leaping from one end to another.

When you have to play the same chord for a longer time, inversions offer another great advantage. In this case, they allow you to embellish your playing by adding breadth to the sound. Whatever you do with them, these kinds of cool techniques are a great addition to your skillset.

B7 inversions on guitar

Since you’re still here, it means that you cannot wait to learn how to play these inversions. The inversions on piano are the same as discussed above under the heading “B7 chord on piano.”

And what about guitar? Good question. There are many ways of playing a B7 on guitar, depending on the string you’re starting from. Here are some playable and friendly inversions for a B7 chord, played from the fourth string: 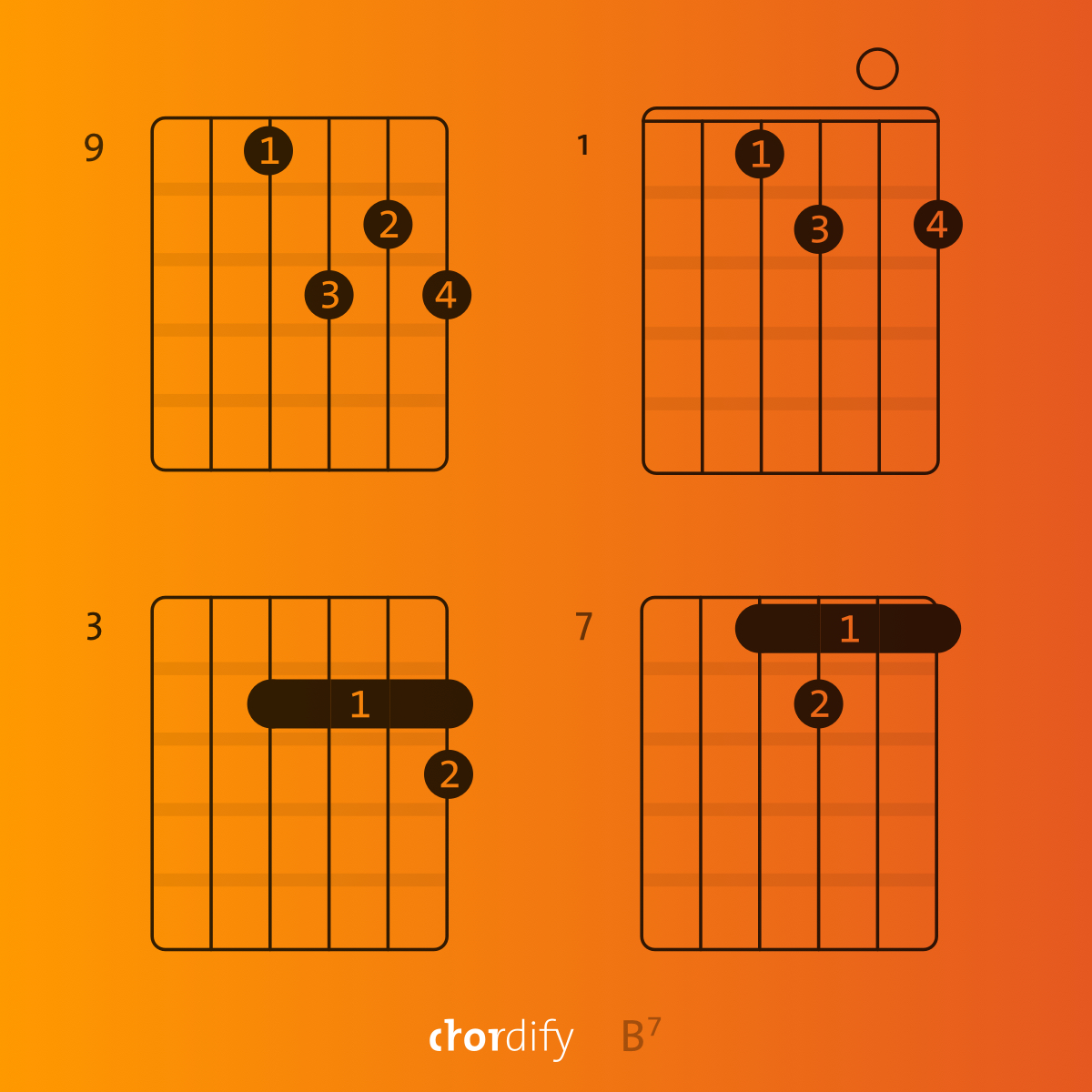 B7 chord inversions on guitar

Get out your instrument, look at these inversions, and happy jamming!