So guys, what was the first instrument that introduced you to music?

M3NSA: “All of my friends and family played the piano. My both grandfathers were serious piano players; almost professional so to say. So, when I told my parents that I wanted to learn to play keys they both jumped on it. A bit too seriously I might add. I started getting lessons five days a week.

“At that time, I was around eight or nine years old and I naturally hated it. After that I was put in a choir and I became a serious piano player in the church. Stuff like hymns and accompaniments for the singers in the choir. At a certain point I started to go through changes in my body, if you know what I mean. My interest for the girl singers increased substantially and rock music took over.” 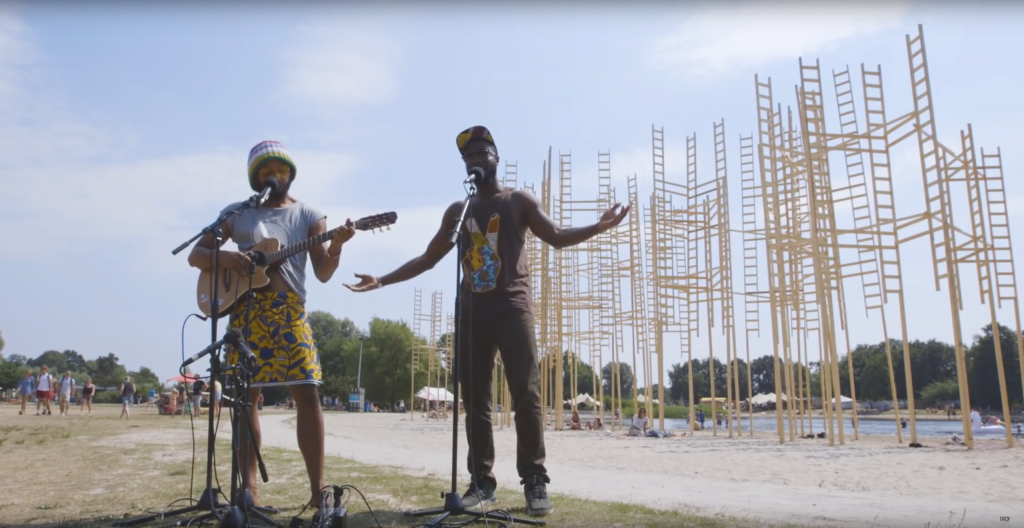 That was the end of soul?

M3NSA: “Well, yes and no. It was the end of the church soul and the beginning of a new kind of soul. Eventually I got more interested in just producing. Combining different instruments and making new sounds.”

When you’re composing, what is your favorite key to write in?

M3NSA: “I like minors. It’s usually easy for me to write something in Gm. When a piece is finished I use a computer to transpose it to whatever key I want.”

Do you still have your first instrument?

M3NSA: “Yeah, actually I do have my first keyboard, a Casio. One of the transistors blew up, but my mum still kept it. This synthesizer was special, because it had all the sounds which were used on the Carpenters song “Rainy Days and Mondays”, so I used to play them a lot. It was crazy.”

And what was your first instrument, Wanlov?

Wanlov the Kubolor: “For me it was also the piano. There was one in my dad’s house, but no one was urging me to play it. It was just there, so I started playing it and experimenting on it like every day. And one day my father gave it to his girlfriend.”

What a dick move. Did that break your heart?

Wanlov the Kubolor: “Yeah, it kind of did. So, I went on to the next thing, catching insects and dissecting them.”

Wanlov the Kubolor: “No, just kidding. But after that, there was no music for a long time. Years and years later I saw a guitar at a friend’s room, picked it up and started experimenting. I was just fooling around on the strings figuring it out along the way. I never had guitar lessons and I never learned anything about keys, notes or even the names of the strings.

“Not until three years ago when I watched a documentary made by a Swedish guy about a musician from Detroit, Michigan called Sixto Rodriguez: ‘Searching for Sugar Man’. I fell in love with his story and his music, so I seriously started studying the guitar. Before that I was more into percussion.

“Now I really like the guitar, because the instrument is good for accompanying my voice when I have something serious to say and that’s all I need.”

You can do a lot of percussion on your guitar, right?

Wanlov the Kubolor: “True, and it’s a lot easier to carry it around as well.”

So, what do you guys love most about your job?

M3NSA: “All the different types of Wi-Fi and all the passwords that go along with them. It gives you the feeling of infinite power, being connected to the world. It’s amazing, really.”

Wanlov the Kubolor: “Yeah, all those different names, emails, places. I have to agree with M3NSA, it’s great.”

Wi-Fi? Okay, cool. So what is the craziest Wi-Fi name you have in your collection?

Wanlov the Kubolor: “I’ll have to go with ‘Pretty Fly For a Wi-Fi’. That’s one of my favorites. But now to answer your question. We are all caught up in so many routines in our daily lives. Not only the people here, but almost everybody around the world. We only know the route from our home to work or school and that’s it.

“But, exposure to the world makes you more understanding and tolerant towards other cultures. So, what we are blessed with, because of our job as musicians, is that we get to travel a lot. This helps us becoming more wholesome people, more understanding. It challenges us to look at things from a different perspective.”

Makes sense. Does all that travelling together turn you into family?

Wanlov the Kubolor: “Yeah, it really grounds you like a person. Entering different communities and lifestyles gives you a lot of new energy and brings you together. It’s an adventure that the two of us are living day in day out.”

M3NSA: “I often try to picture me living in Ghana or England my whole life stuck in a set paradigm, a box. Well, I think I would have been a very angry and frustrated person if that was the case. Now I feel really grounded and I feel very comfortable in my skin, because of my experiences as a traveler. It’s not only about the music, but more about the whole experience.”

And now we’re on the subject of experiences. What is the weirdest thing you have experienced backstage?

Wanlov the Kubolor: “Snoop Dogg. Yup, that’s by far the weirdest adventure we had backstage.”

M3NSA: “We were playing at Sziget festival in Hungary and when we entered the artist area we saw the whole Dogg Pound with Snoop, Warren G, Daz Dillinger, Nate Dogg had just passed away. This are people we grew up idolizing and sharing a room with those guys was something we never thought possible.”

Wanlov the Kubolor: “Snoop had his own bodyguards. He told us that he had them around to protect him from the local authorities, because smoking weed isn’t legal everywhere in the world. Crazy stuff, so by far our weirdest backstage experience.”

If you had to give one tip to starting musicians, what would it be?

Wanlov the Kubolor (laughing): “And if you don’t want listen. Well, then just start doing what you want to do. Don’t listen an’ go for it. Keep trying, keep practicing, keep experimenting until you hit the spot in your soul.”

When do you hit that spot?