This week, the spotlight is aimed at G#. Fun fact: whether a note is raised or lowered depends a lot on how you look at it. Let me explain. The G# is a G raised by a semitone. But, when an A is lowered one semitone, you get an Ab which actually sounds exactly like a G#. Yeah, crazy isn’t it? But so true. 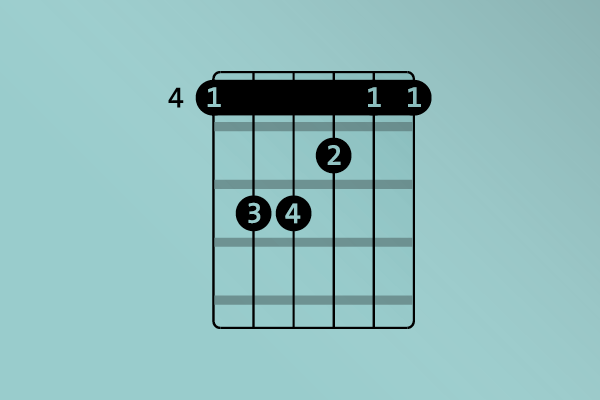 The same applies to all chords. For example, a D# is an Eb, an F# is always a Gb, and a C# is a Db. Useful to know, so you won’t get frightened by the indication of lowered chords. And if the going gets weird just experiment a bit with the Chordify capo tool. But enough theory! Time to play some gems written in G# (or Ab).

The heavy nu-metal band Slipknot became well known in the nineties with songs like “Wait and Bleed”, but the masked men have not stood still since then. Their track “Killpop” from 2014 shows they’ve still got what it takes when it comes to producing the heavy groove that’s so characteristic of their style.

This headbanger owes its sound to a dragging game of chords. Again and again we see an A turn into an Ab and an Abm and an E dissolve quickly via a Db into a Dbm. This is a wonderful opportunity for the advanced guitarist to exercise these chords. If you’re still a beginner, drag the capo tool to the second fret and see what happens.

“Clean Bandit” is all that “Killpop” is not, except for the G# that plays an important role in both. The hit by the British electro act Symphony in collaboration with Swedish singer Zara Larsson is a combination of beautiful piano parts and a pretty simple chord progression.

The track consists of five chords: Ab, Bb, Eb, Cm, and Gm. This is not your basic triad progression. If you find it too difficult, use the capo tool on the first fret. Keep in mind that this song sounds better on piano. So, if you have a keyboard nearby, grab your chance and play around.

Feeling a bit down in the dumps? “Malibu” by pop star Miley Cyrus is just what the doctor ordered, a nice upbeat track for the guitar. The song has a cheerful guitar part which is perfect for a nice summer vibe in your jam. The chords vary a bit, but if you look more closely you’ll see that the song consists of five triads.

This song is not only a good addition to your jam, it is also a fine exercise for your fingers. The verse revolves mainly around the Ab and the Absus4. The position is almost the same but slightly adjusted. Try it out and don’t get frustrated when it doesn’t work out right away. As with any kind of training, the following applies: no pain, no gain!

Lose Yourself to Dance – Daft Punk

We conclude this article with a funky track. “Lose Yourself to Dance” by producer duo Daft Punk has everything that a classic funk song needs and more… The recurring guitar riff, quickly switching between chords that lie close together, is difficult but manageable. The electronic additions ensure that the song remains varied.

As with Slipknot’s composition, this track has a main riff that alternates a couple of flattened chords before it dissolves. The progression sways between Ebm, Gb, and Bbm, Ab. To make it a little easier for yourself, you can drag the capo tool to the first fret. This makes the chords much more accessible. Try to keep a close eye on the pace of your strumming hand. Happy jamming!

Chord progression of the month: I-V-vi-IV
How to play an E chord in three simple steps