IDER just released their debut album on the 19th of July. We had the chance to talk to Megan Marwick and Lily Somerville after their show at Down the Rabbit Hole festival.

Right after their show we hurry to the backstage. Our contact person is waiting for us at the gate. “No need to hurry,” promotor Ingmar says. “We can’t find the girls, but they’re probably on their way. Just take a seat, have a drink, and wait a sec.” So we wait until the colorful duo turns up. Big smiles and full of energy after their gig.

Megan: Well, our debut album Emotional Education is coming out soon, right in the middle of summer. We’re really looking forward to that. 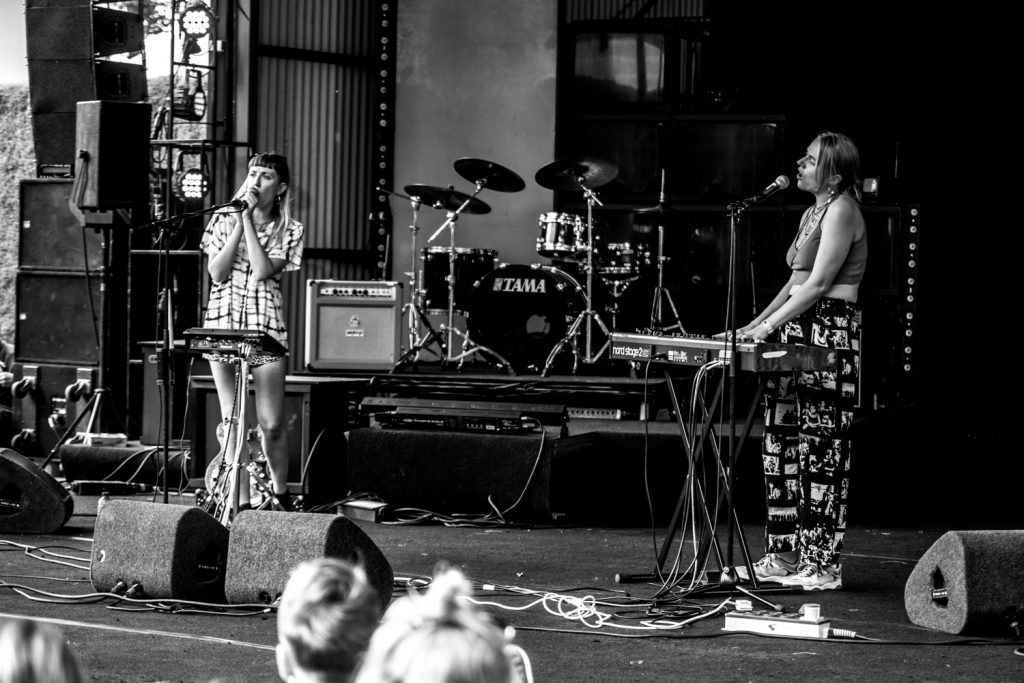 That must be exciting. What are things you try out on this record which are different compared to your previous work?

Lily: There’s a lot of different genres we try out. The lyrics are more honest and real than before.

Megan: Yeah, definitely bolder and stronger than on previous recordings.

In what way are they bolder?

So what are the things you are sharing and talking about on Emotional Education?

Lily: Themes on the album are introspection, relationships with your family, friends, sexual partners. We talk about sex and mental health.

Play along with “Wu Baby” by IDER

Is IDER your first band?

Megan: We haven’t been in other bands, not properly that is. Of course we’ve been writing and playing music for a long time as solo artists, since we’ve been teenagers. We met at university, jammed with a few other people, but it was never as serious as what we do now.

When you are writing your songs, do you have favorite chords or keys you like to fall back on?

Megan: I think we tend to write a lot of minor.

Megan: And it’s become quite a trade in our music, because our songs tend to contradict themselves a bit. The album is quite upbeat and there’s a lot of movement in the record. We experiment with production, so there are tracks that feel like R&B, rock and anthemic. But the lyrics and the chords are often melancholic and sad. 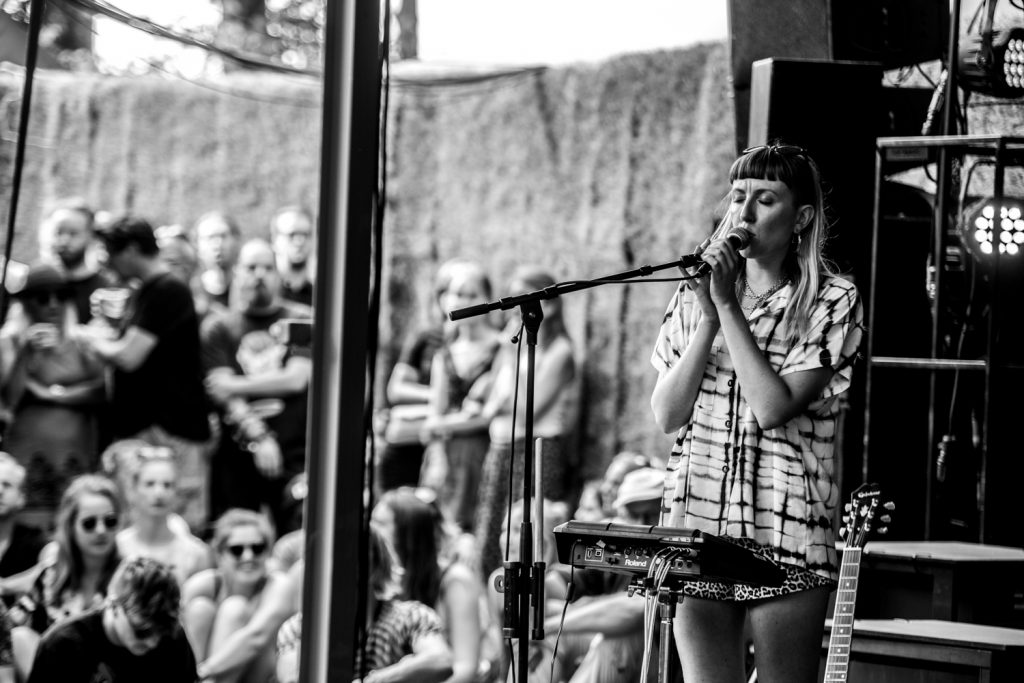 Megan: We literary got a message now on Instagram, from someone who saw our show just an hour ago. It says: “Your music makes me feel so happy and so sad at the same time.” And I think this is so true about our record. It’s a summer record, bright and upbeat, but we tend to move in more melancholic minor-chord patterns.

Do you use alternative guitar tuning for some of the songs?

Lily: No, we play in standard tuning. This is because we both started out on piano, so we write a lot of our songs on that instrument before adding the guitar part.

When did you make the transition from piano to guitar?

Lily: Well, I always kind of tinkled on it, but it’s just the last few years I’m more into it. It feels like a different thing to me. I can manage fine, but the piano is my first instrument.

Megan: I’ve got a banjo, that’s as close as it gets to a guitar for me.

Do you still have your first piano?

Lily: I still have my first guitar, and I think my auntie’s got my first piano. It’s an electric piano. 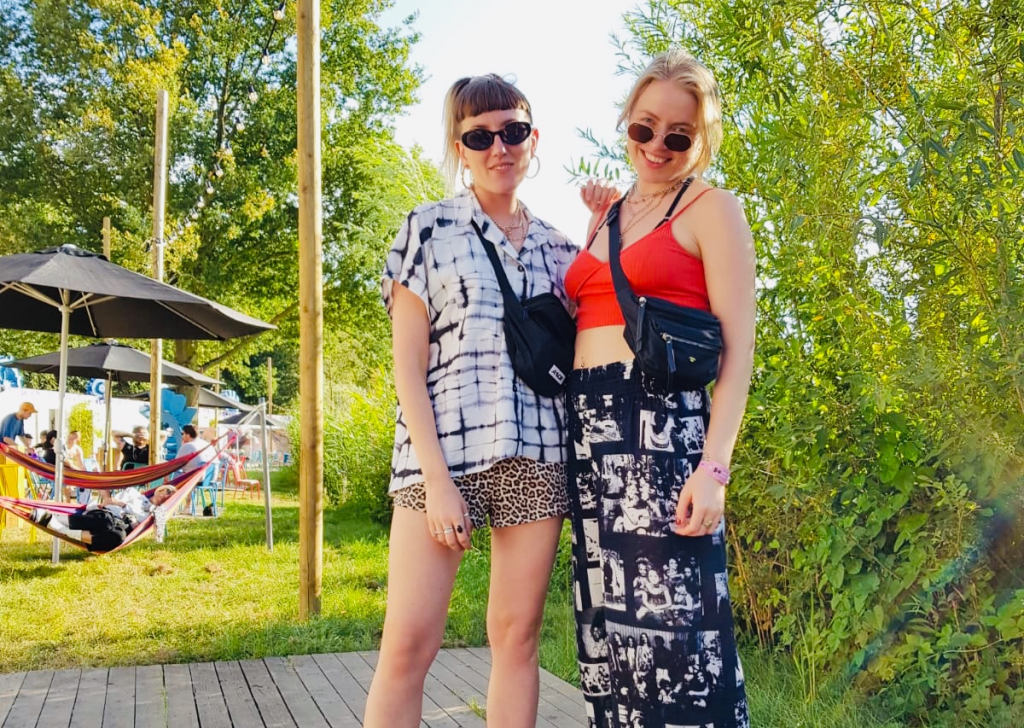 Megan: I grew up in east London in a really tiny house. My parents got a huge grand piano as a wedding present. This thing didn’t suit the house at all. We had a tiny living room and this instrument was just too big. So I was so lucky I grew up and learned playing on that amazing thing. Unfortunately my dad sold it a few years ago.

Ah, it still hurts I see.

Megan: Oh God, yes it does. Now, when I walk into the house, there is this massive gap where the piano would be.

Didn’t the neighbors complain when you were practicing as kids?

In this line of work you’re away from home a lot. Do you find that hard?

Lily: Well I think we adjust to it. To be in a band and being an artist you kinda have to. You’ve got to enjoy the lack of routine. There’s no schedule. I guess it’s part of the fun.

If you could give starting musicians a piece of advice what would that be?

Lily: Don’t overthink it, get over yourself and do what you’re doing already.

Megan: Don’t try to change. It’s so easy to compare yourself to others with social media and all. Don’t do that. Just do what you do best and write lots and lots of songs. Keep writing as many tracks as you can.

Thanks IDER best of luck with the record release!